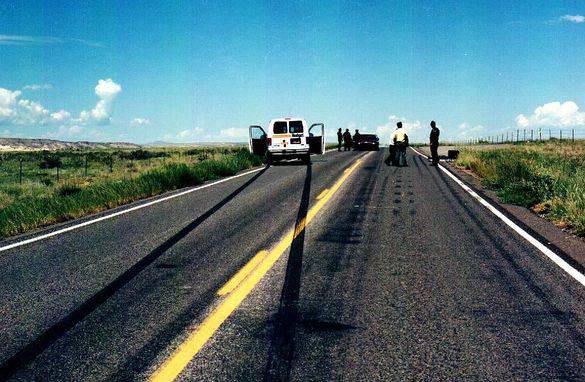 On Aug. 25, 1994, a young Rio Rancho father of two small children was fatally shot when the Wells Fargo Armored Service Corp. van he was driving was ambushed on a remote stretch of Highway 6.

Jeff Oelcher’s killer has not been caught or identified, despite a massive manhunt and FBI investigation.

The Albuquerque FBI Division is offering a $20,000 reward for information leading to the arrest and conviction of the person or persons responsible for Oelcher’s death.

Oelcher, 28, was driving the unarmored rental van at about 10:30 a.m. from Socorro to Grants on a routine cash carrier route.

As the vehicle neared Mile Marker 13, approximately 30 miles southwest of Albuquerque, a man lying prone in the bed of a pick-up truck on the side of the road opened fire, possibly with a .223-caliber rifle.

One of the rounds struck Oelcher in the head.

The other courier in the van returned fire, forcing the truck to flee without getting any money.

The truck, which was described as dark-colored, with a light-colored camper top, was last seen heading northwest on Highway 6 in the direction of Interstate 40.

The surviving courier said at the time that the shooter in the truck was a male with a dark complexion who wore camouflage clothing.

Anyone with information about this case is asked to call the Albuquerque FBI at 505-889-1400 (24 hours) or fill out an electronic reporting form at https://tips.fbi.gov/.