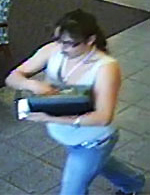 The FBI and Albuquerque Police Department are looking for a woman who robbed New Mexico Bank & Trust at 3701 4th St. NW Monday, March 16.

The suspect is described as a Hispanic female with a light complexion and reddish brown hair cut with bangs. She is approximately 35-40 years old, about 5’2” to 5’4” tall, and weighs 145-150 pounds.

The woman has crooked teeth, scars on her face and tattoos on her neck and left arm. She wore eyeglasses, a gray tank top, tight blue jeans, and a rosary of white beads around her neck with a key ring at the bottom of it. 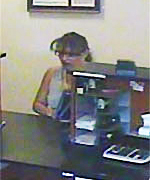 Witnesses said the suspect entered the bank at approximately 3:30 p.m. carrying a zippered black binder that she opened to take out a demand note and give to a teller. The teller handed over an undisclosed amount of money to the suspect, who left the bank.

Anyone spotting this woman in the Los Alamos area or having information about this robbery is asked to call the FBI at 505.889.1300 or Albuquerque Metro Crime Stoppers anonymously at 505.843.STOP.

The FBI may pay a reward of up to $1,000 for information leading to arrest and conviction of a bank robber.

Information about other bank robbers wanted by the FBI can be found at https://bankrobbers.fbi.gov.