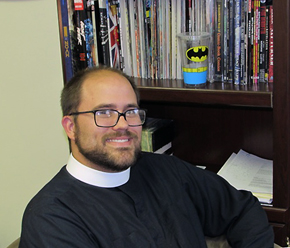 Father Chris Adams is the new Rector at Trinity on the Hill Episcopal Church. Photo by Kirsten Laskey/ladailypost.com

Father Chris Adams stepped behind the pulpit for the first time July 19 at Trinity on the Hill Episcopal Church. Adams is the church’s new Rector; he succeeds Colin Kelly who retired in May 2013.

Reflecting on his first sermon, Adams told the Los Alamos Daily Post, “One of things that has been really awesome is the warmth that this community has received me and my family.”

He added a highlight has been becoming a part of the community and making connections. Plus, Los Alamos does not feature the heat and humidity found in Wilmington, N.C., where Adams previously worked.

In Wilmington, Adams worked at First Baptist Church before leaving to go to Duke University to earn a master’s degree in divinity. He also spent an additional year at Virginia Theological Seminary before returning to Wilmington to work at St. Andrews on-the Sound Episcopal Church.

He moved to Los Alamos with his wife Karen Proctor-Adams, and son Jude.

Adams explained he decided to switch denominations after meeting a patron at a Japanese restaurant. He explained he worked at the restaurant when he was an undergraduate. The customer was Greek and introduced Adams to the Eastern Orthodox Church. In addition, Adams read a book written by St. Athanasius, which opened his eyes to aspects of Christianity including the sacraments and the Eucharist. He said it spoke to him in ways “I hadn’t been spoken to as a Baptist.”

However, Adams said he and the Eastern Orthodox Church had differences and he wanted to be a part of a church that looked to the future as well as to the past. It was a six year journey during which Adams worshiped at an Episcopal church while working at a Baptist one but finally, Adams said his wife told him that he would not be happy unless he became an a Episcopal priest.

As a result, Adams started the process to become a priest in 2011 and was ordained two years later.

‘I wasn’t leaving Baptist life. I wasn’t running away. I was finding my way home to a home that I never knew about. It felt very much like a homecoming to me,” Adams said.

As the new priest at Trinity on the Hill, Adams said, “My first goal is to be the best priest I can and love these people the best I can.”

With that, he added, comes being faithful to how Jesus calls people to live. He wants to point people to Jesus and not to himself. Adams also likes to find ways to reach across generation gaps and bring people together and keep his “finger on the pulse” of what is going on in the community. Trinity on Hill, he said, does a “fantastic job with this.”

Adams said he is very supportive of the church’s community work, including House of Hope, a program where members of the church travel to Juarez to build houses for those in need.

“It’s exciting to be a part of a church willing to spend time with people who need help,” Adams said, adding that he also is hoping to address local residents’ needs.

He also appreciates that the church offers services where everyone has a voice, including the younger generations, and he is hopeful to find more ways to increase the kinds of voices heard as well as continue to reach out to the youth and young adults in the church.