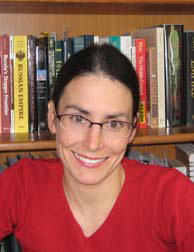 At 7:30 p.m. Tuesday at Mesa Public Library, Russian frontiers will be brought a little closer to Los Alamos. Dr. Erika Monahan, an associate professor at the University of New Mexico will present the talk, “People, Politics and Prospects in the Post-Soviet Peripheries,” which is part of the Los Alamos Historical Society’s lecture series.

During her talk, Monahan will discuss the borderlands in the post-Soviet Union from issues of economic development and migration to security and energy politics. Monahan also will take on the Soviet and imperial Russia legacies.

“I hope people will get a better sense of this Eurasia world,” she said.

To enhance this understanding, Monahan brings numerous personal experiences to the lecture. She traveled to Russia in 1991 through the People to People exchange program and from 1997-2000, Monahan worked in Russia in a start-up transport company. Her experiences in Russia continued while working on her graduate degree, Monahan studied Russian archives.

She currently teaches Russian history at the University of New Mexico.

She described her employment in the transport company as a “fascinating perch to study Russia in the late 90s.” The economy in the country was suffering and since the Russian currency was losing value, people would invest in other things that they believed would have more worth – like appliances or in the case of one co-worker, a fur coat, Monahan said.

Los Alamos, through its Sister City initiative with the city of Sarov, has created a close relationship with Russia. Monahan’s talk and experiences could help dissolve some of the fear and doubt toward the country that lingered from the Cold War era, she said.

“It is a country that always seems to be on a wild, crazy and sometimes tragic ride,” Monahan said.