Even When It’s Out Of Commission, Everybody Wants A Piece Of WIPP

Los Alamos Daily Post
Twenty months after a truck fire and a Valentine’s Day radiation release almost half a mile underground, the Waste Isolation Pilot Plant in southeastern New Mexico is still out of business and not expected to reopen before the end of next year.

And that expectation is far from definite considering the mounting complications and competing needs that are becoming more and more apparent across the nuclear enterprise.

Meanwhile, nuclear waste shipments, some planned and others merely wish-listed have been delayed or halted all across the country, including unshipped transuranic waste from Los Alamos National Laboratory’s Area G and the waste intended for WIPP that has been sent to Waste Control Specialists (WCS) in Andrews, Texas.

Last week, nuclear watchdogs from the Savannah River Site in South Carolina and Idaho National Laboratory visited Los Alamos and Carlsbad to get a closer look at the repository and waste site immediately responsible for the logjam in the waste stream. Tom Clements of Savannah River Site Watch and Beatrice Brailsford of the Snake River Alliance teamed up for site visits with their New Mexico counterpart, Don Hancock, the director of the Nuclear Waste Safety program at the Southwest Research and Information Center in Albuquerque.

“We have major contaminations at Los Alamos, Savannah River, Idaho and other places,” Hancock said. “We now have significant contamination at WIPP. If more comes it could become a significant problem.” 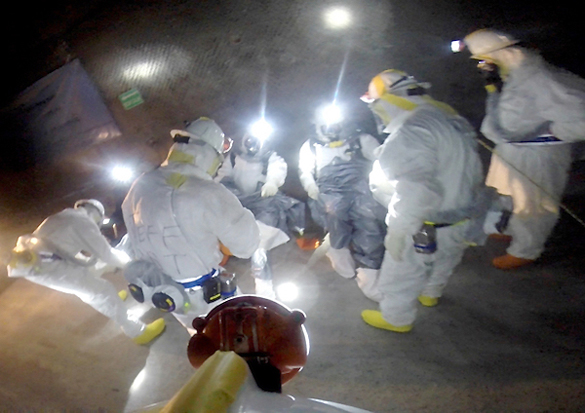 Speaking to a group of activists in Santa Fe, Hancock said South Carolina, Idaho and New Mexico were primary contributors to WIPP’s waste inventory. Much of that waste originated at the Cold War nuclear bomb factory at Rocky Flats near Denver that was closed in 1992. In 1993, Rocky Flats weapons grade plutonium began to be distributed to Oak Ridge National Laboratory, Savannah River Site and Los Alamos.

Large quantities of Rocky Flats waste were parked in Idaho, awaiting final disposition, and more than half of the shipments and half the waste in WIPP comes from Idaho. Now all of those nuclear weapons sites and Hanford, Washington have contamination problems, and WIPP, which was supposed to last for many centuries, has now been contaminated as well.

Testifying Oct. 7 in the House Armed Services Strategic Forces subcommittee, Frank Klotz, who heads the National Nuclear Security Administration, reiterated Energy Secretary Ernest Moniz’s expectation that WIPP would be open by the end of next year.

“This is a very important site to the department and the nation because it is where we can store TRUwaste,” Klotz said, using the short term for transuranic waste, miscellaneous materials that have been contaminated by plutonium and other man-made radioactive elements.

“So the secretary and the entire department are seized with the importance of returning WIPP to full operation as soon as we possibly can,” he added.

A complicating factor was that Klotz was not testifying so much about the transuranic waste shipments to WIPP, but rather in support of a different kind of waste for which there is as yet no clear regulatory pathway to WIPP. That would be the 34 metric tons of weapons grade plutonium subject to disposition under an agreement with Russia signed in 2000. The Plutonium Management and Disposition Agreement requires the two countries to get rid of a combined total of 68 metric tons of plutonium.

Originally both countries planned to convert their plutonium stocks to uranium oxide (mixed oxide fuel, also known as MOX), which would then be used to power nuclear generators, but the Russians found that plan unfeasible and in 2010 were granted an amendment to the agreement. Now DOE finds itself hard pressed to continue with the MOX plan, because of severe budget and schedule overruns and other management problems at the partially completed MOX Fuel Fabrication Facility at the Savannah River Site. What to do?

Under the new plan, called “Dilute and Dispose,” plutonium pits, the triggering explosives for nuclear weapons, would be extracted at Pantex, near Amarillo in Texas. They would be shipped to Los Alamos National Laboratory and converted to the more stable compound, plutonium oxide, which would then be shipped to SRS to be diluted before forwarding to WIPP for final disposition. (In one version of this process, the plutonium oxide is sprinkled with “stardust” — an unspecified secret ingredient that makes the nuclear material difficult to purify or re-weaponize.)

In recent months, a rapidly prepared document known as the Red Team Report concluded that the “Dilute and Dispose” process would be a cheaper and simpler technique for neutralizing the plutonium. In order to justify such a major change in direction, the study also had to identify some of the most serious risk factors in taking this approach, one of which has to do with the capacity of WIPP to handle the additional load and the necessity of obtaining legal permissions and regulatory easements that would enable WIPP to accept shipments of neutralized plutonium.

“Ensuring adequate WIPP capacity (and/or enhancing disposal efficiency) would require high level, transparent and cooperative discussions with the State of New Mexico,” the Red Team Report states, “but the Red Team believes that the constructive on-going engagement with the State of New Mexico regarding WIPP restart bodes well for such discussions.”

Asked on Friday if the New Mexico Environment Department would be amenable to regulatory changes that would enable WIPP to meet the additional demands, the department responded in a prepared statement that its current focus is on WIPP’s recovery and meeting the existing mission.

“Although we are aware of discussions for possible disposal of other types of waste at WIPP, it is premature to discuss any such change to WIPP’s mission until the facility resumes operations,” the statement continues. “We do support the Consent-Based approach being used for considering the opinions of all stakeholders, especially the regional community which is most affected.”

Which brings us back to Don Hancock and the visiting activists who have succeeded in their opposition to the MOX project, yet at the same time are aware that WIPP and New Mexico will now begin to face new and potentially unacceptable risks. They see a WIPP in deep trouble, as Hancock put it: “Its mission has been ‘To start clean and stay clean,’ but that didn’t work.”

“A lot of officials think it is a given that WIPP is going to open,” he added. “We need to be talking about why, if we are going to spend a lot of taxpayer’s money and it doesn’t have capacity for what it’s supposed to do.”

“In 2014, DOE estimated that its total liability for environmental cleanup…is almost $300 billion and continues beyond the year 2089,” according to a Government Accountability Office report on “Hazardous Waste Cleanup,” Sept. 11, 2015.

Although WIPP is expected to be reopened before 2017, the nuclear weapons officials have given themselves five years to get the regulatory framework revised and prepare the supporting facilities for “downblending” plutonium for permanent storage in New Mexico. Meanwhile Congress and DOE and the weapons complex will have to demonstrate that they can responsibly contain a growing and ever more contingent, radioactive mess.