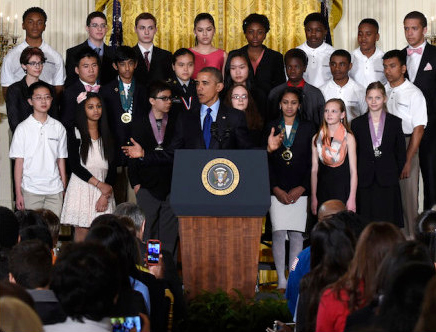 President Obama with students at the annual Science Fair at the White House. Courtesy photo 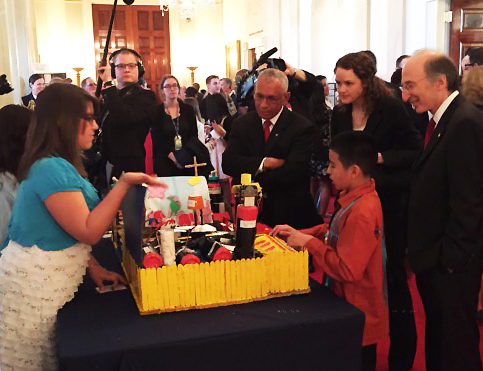 WASHINGTON, D.C.– Last Monday a sixth grade team from James Rodriguez Elementary School (JRES) in Española were part of an exclusive group of 100 elementary, middle and high school students from throughout the nation invited to present their inventions to President Obama at the annual White House Science Fair.

The Española team including Casandra Dauz, Jose Valdez and Jaleena Rolon and their teacher Jimmy Lara set up their project inside the White House and presented their creation to a variety of attendees, including astronauts and the Administrator of NASA.

Their project titled “City of Crystal Water,” a city of the future where they were challenged to choose two foods (one vegetable and one protein) and design a way to grow enough of each within the future city borders to feed all of the citizens for at least one growing season.

The Espanola team selected fish and carrots as their key crops which can be grown in concert through the use of fish farms and hydroponics. Other problems they had to solve included energy generation and distribution.

What made the Española team stand out above all the rest was their recognition that in a city of the future there is a mixing of many cultures and customs. The Española team incorporated four languages into their City presentation: Spanish, English, American Sign Language and Tewa.

Jose is from the Santa Clara Pueblo, Cassandra’s church accommodates the hearing impaired, and Jaleena is the daughter of recent immigrants. The team earned recognition for Most Unique Architectural Model at the New Mexico Regional Future City Competition.

Sixth-grade teacher Jimmy Lara has been an elementary educator for 26 years and has been a driving force in incorporating technology and STEM topics into the curriculum at James Rodriguez Elementary. He and his colleagues at his school have solicited assistance from many resources, including Los Alamos National Laboratory to help make science and technology a central focus of their school’s curriculum.

The impact of these efforts can be seen in the success of these students on a national stage. At the event in Washington Lara was quoted saying “For two Hispanic girls and a member of the Pueblo to be invited to the White House Science Fair was a huge honor for our school and community.” He is correct. 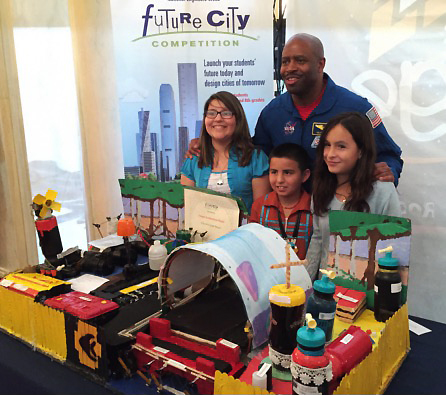 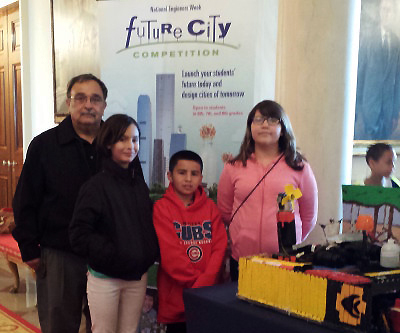