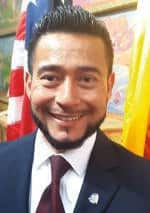 By JAVIER SANCHEZ
Mayor of Española
The fact that we are living with an opioid epidemic in this country, in this state, and in the Española Valley is not news to anyone reading this letter—we have all been impacted in some way by this epidemic.
According to the Centers for Disease Control (CDC) there were 42,249 deaths attributed to opioid overdose in this country—115 deaths every day. In New Mexico, we have been hit especially hard. As of 2016, New Mexico’s rate of opioid overdose deaths exceeded the national average at 25.2 deaths per 100,000 citizens (the national average is 21.3 per 100,000).
While by no means a comprehensive solution, increasing access to naloxone is something every community can take action on right away to help decrease opioid overdoses is increasing access to naloxone. Naloxone is an FDA approved medication designed to reverse opioid overdoses in real-time and has been used for years with a proven ability to be extremely effective and safe.
New Mexico has been a leader in increasing access to naloxone by requiring all first responders to carry the drug, providing greater access at the pharmacy counter, and encouraging co-prescription of the medication for at-risk patients. These regulatory changes have helped protect vulnerable populations in New Mexico, but there is still much more that can be accomplished through increased co-prescription in federal health care programs.
In April, the United States Surgeon General issued an “Advisory on Naloxone and Opioid Overdose” where he outlined multiple groups of individuals believed to be at an elevated risk of an opioid overdose, and who would benefit from co-prescription of naloxone to ensure their safety. This group includes patients who are prescribed opioids who are discharged from detoxification facilities, patients discharged from emergency medical care facilities following an overdose, and individuals released from incarceration who have a history of opioid abuse.
These individuals would especially benefit from the preventative effects naloxone provides, and if necessary, the overdose-reversing treatment it renders.
The CDC has also recommended naloxone be co-prescribed for all patients receiving high doses of opioids, for patients who take opioids in combination with certain medications, and for those who have a history of substance abuse. These patients are at a higher risk for misuse or accidental overdose.
The federal government has an enormous role to play in getting this important drug into the hands of people who need it most. Our Congressional Representative, Ben Ray Lujan, who has been a fierce advocate for our community, can continue to take a leadership role in this area and support the Centers for Medicare and Medicaid Services (CMS) follow CDC co-prescription guidelines.
Today, Medicare Part D is the largest payer of opioid pain relievers. Additionally, a recent report showed that Medicaid beneficiaries are prescribed pain relievers at a higher rate than those with other sources of insurance. More than 369,000 residents of New Mexico received Medicare coverage in 2015, according to CMS and 852,106 were enrolled in Medicaid as of 2018, 243,100 of whom are adults. These policy changes would have an immediate impact in New Mexico.
Co-prescription of naloxone would not only improve patient outcomes—it is also cost effective.
Opioid-related ICU admissions are increasing in both number and price. However, studies show that access to naloxone drastically reduces the number of emergency department visits, ultimately reducing overdose costs.
I thank Representative Lujan for his work to support naloxone access to date and I look forward to his work with his colleagues in Congress to increase access to naloxone through a change in federal policy to encourage co-prescription, when appropriate. This will have enormous impact and set a precedent for coverage by private insurers and physician prescribing practices across the country. Guidance and regulations only work if implemented and followed. Medicare and Medicaid should take the lead on co-prescription.
Javier Sanchez is the mayor of Espanola. He was elected in March 2018. He also served as a board member of the Regional Development Corporation and the Northern New Mexico Crisis Center.
Menu
LOS ALAMOS