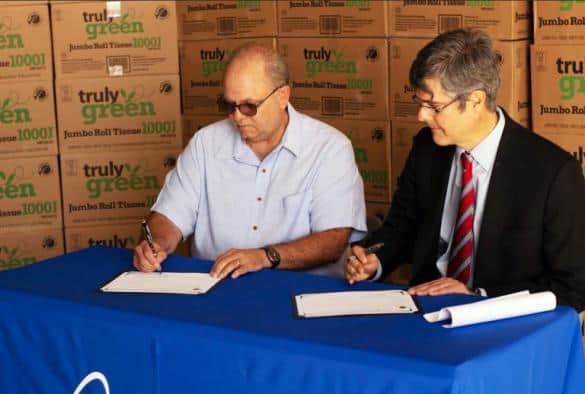 PMI CEO Eric Quintana, left, with LANL Director Thom Mason this morning at the signing ceremony at PMI in Española for a major new Lab contract. Photo by Aaron Lopez/PMI

“Enhancing opportunities for small businesses like PMI to provide goods and services to the Laboratory is a priority,” said Mason told the crowd gathered for the event. “The Laboratory needs to partner with regional companies to carry out our work, and there’s also an important economic benefit to Northern New Mexico.”

The subcontract, which has a three-year base period with options for two additional one-year terms, was awarded to PMI and its lower tier subcontractors Tsay Professional Services based in Ohkay Owingeh, NM, and Kleen Tech Services Corporation from Denver, Colo., after a competitive bid process.

Established in 1994 by Eric and Celina Quintana from their home, PMI now employs more than 160 people and takes an environmentally friendly approach to its janitorial services, producing its own line of green-certified cleaning products.

“We’ve had smaller Laboratory subcontracts since 2009, and as the company has grown we’re grateful for the help we’ve received from the Lab’s Small Business Program Office, as well as the Regional Development Corporation and the New Mexico Small Business Development Center,” PMI Chief Executive Officer Eric Quintana said.

The signing ceremony this morning was clearly a joyous occassion for PMI CEO Eric Quintana, left, LANL Director Thom Mason and the crowd gathered at PMI in Española. Photo by David Moore/LANL

Scene from the contract signing event this morning at PMI. Photo by Carol A. Clark/ladailypost.com

Scene from the contract signing event this morning at PMI. Photo by Carol A. Clark/ladailypost.com

The signed acknowledgement of the subcontract award between PMI and LANL. Photo by Aaron Lopez/PMI

The PMI facility this morning at 835 N. Paseo de Oñate in Española. Photo by Carol A. Clark/ladailypost.com 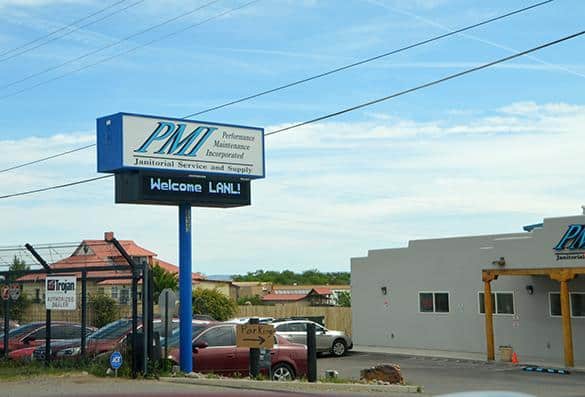 The PMI facility welcomes LANL this morning at 835 N. Paseo de Oñate in Española. Photo by Carol A. Clark/ladailypost.com