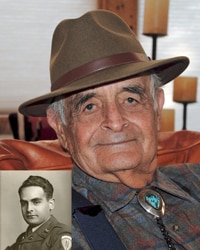 Epifanio J. Trujillo, Sr. (Eppie) 94, Los Alamos, passed away peacefully on January 18, 2018 at home with his wife and family by his side.

Eppie was born in Cebolla, on October 27, 1923 to Pedro and Juanita (Vargas) Trujillo y Chacon. He was inquisitive, never met a stranger, and would tease anyone who crossed his path.

As he grew older, Eppie would frequently express to his family and friends he had lived a purposeful and beautiful life. He grew up on his father’s and grandfather’s homestead ranch, attended school taught by the nuns, and loved his parents, seven siblings, nephews and nieces.

He was graduated from Tierra Amarilla High School in 1942 and studied at the Capitol City Commercial College in Santa Fe, before being inducted in the Army reserves and then transferred to Highland University to study “radio communication”.

Eppie served as a cryptographer in the U.S. Army 888th Signal Company from 1943 to 1946 and also served during the Korean conflict.

In 1946, he attended NM A&M (NMSU), where he met Rebecca (Becky) Dominquez, his future and beloved wife of 69 years. They moved to Los Alamos, where he first took a position at the A.E.C. Pass Office, until he became a Uniformed Guard for the Pro Force in the Department of Energy. He worked through the ranks ultimately promoted to Captain, retiring in 1980. Eppie and Becky continued to work at their ranch in Cebolla into his 70’s.

He is survived by his wife, Becky, son Eppie, Jr. (Eileen); son, Tom (Leonora); five grandchildren and four great-grandchildren. He was preceded in death by his 2 sons, Gilbert and Michael (Kathy).

As the youngest child, he is the last of his family’s generation and will be remembered by many nephews, nieces, and friends.

A rosary will be recited on Wednesday, Jan. 31, 2018 at 10 a.m. at Immaculate Heart of Mary Church in Los Alamos with a Memorial Mass to follow at 11 a.m. In lieu of flowers, please donate to Los Alamos Visiting Nurses a 501(c)(3) nonprofit or the charity of your choice in the name of Epifanio J.

The family of Epifanio J. Trujillo, Sr. has entrusted their loved one to DeVargas Funeral Home & Crematory of the Española Valley. 505.747.7477 – www.devargasfuneral.com.