Environmental Research Reflected In Obama’s Trip To The Arctic 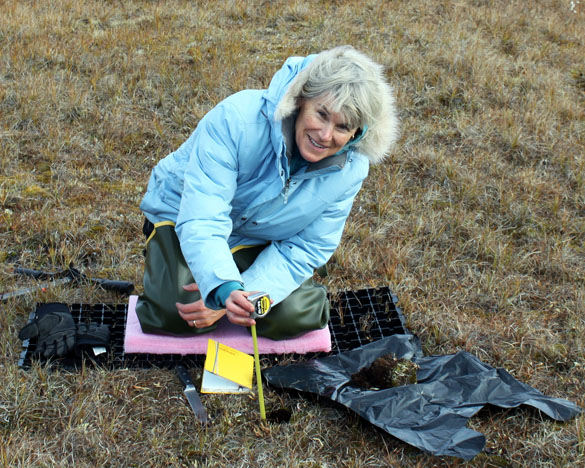 Cathy Wilson says, ‘I am collecting shallow cores to quantify the depth of the peat layer in the soil. The peat thickness strongly controls the transfer of heat from the atmosphere into the deeper soil, which impacts how deep the soil thaws each year. We then use the hole in the ground to perform hydrologic measurements. Peat depth and hydraulic conductivity are two important parameters that go into our models that predict the rates of permafrost thaw.’ Courtesy photo 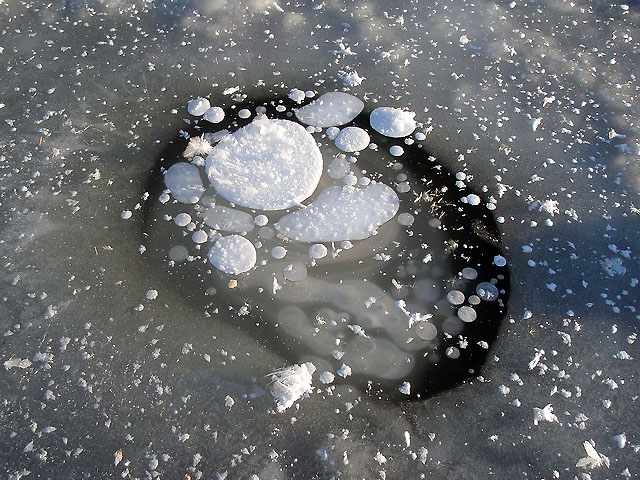 Frozen Methane Bubbles in Alaska: When ice-rich permafrost thaws, former tundra and forest turns into a thermokarst lake as the ground subsides. The carbon stored in the formerly frozen ground is consumed by the microbial community, who release methane gas. When lake ice forms in the winter, methane gas bubbles are trapped in the ice. Credit: Miriam Jones, USGS. (Public Domain)
By ROGER SNODGRASS
Los Alamos Daily Post

Not long after touching down in Anchorage, Alaska earlier this week, President Barack Obama spoke at an environmental conference, where he quickly introduced one of the main points of his visit.

“The Arctic temperatures are rising about twice as fast as the global average.” he said, noting that the Arctic region is the “leading edge” and the “leading indicator” of a potential environmental crisis that the entire world is facing.

In recent years, Los Alamos National Laboratory has expanded its national security activities to includea growing portfolio of climate change research and touching directly some of the same subjects that the President was talking about this week.

Speaking of the real-life effects of climate-change in Alaska, Obama said, “Thawing permafrost destabilizes the earth on which 100,000 Alaskans live, threatening homes, damaging transportation and energy infrastructure, which could cost billions of dollars to fix.”

Cathy Wilson, who leads the Atmosphere, Climate and Ecosystem Science team at LANL, studies how terrestrial processes in the Arctic and other environments impact and interact with climate change. Sponsored by the Department of Energy Office of Science, her group is working with Oak Ridge National Laboratory and a consortium of national labs in partnership with the University of Alaska at Fairbanks.

“The component that Los Alamos leads is hydrology and geomorphology, that is, how will the warming of Alaska’s permafrostlandscape drive changes in the structure of the landscape,” Wilson said. ”As mentioned in President Obama’s speech, a lot of deformation of the landscape occurs.” Along with coastal erosion, which is a big issue and related to the action of the sea and ocean waves, there is also the impact of melting permafrost, which can cause the land to subside and cause structural changes in roads, buildings, pipelines and many other features in the built environment, Wilson added.

At the same time, the national labs are investigating an urgent question concerning the massive amounts of carbon locked up in the Arctic’s permafrost landscapes.“When the permafrost is no longer permanent,” Obama said, “when it thaws or burns, these gasses are released into our atmosphere over time, and that could mean that the Arctic may become a new source of emissions that further accelerates global warming.”

“President Obama talked about the emissions related to permafrost carbon, because as warming occurs it increases the emissions of these greenhouse gasses from the permafrost landscape,” Wilson said. “That then increases the concentrations of greenhouse gasses in the atmosphere, which circulates globally.  So it has a global impact in terms of increasing concentrations in the atmosphere, which can increase warming, which is what we call a positive feedback.”

There are approximately 1,700 gigatons of frozen organic carbon in the permafrost, Wilson points out, noting that its depth increases every year because of climate change. “This can expose previous frozen inorganic carbon to microbial decomposition, which generates carbon dioxide and methane.”she said.

The type of gas depends on the chemistry and moisture status of the soil. More saturated soils produce more methane than the drier soils that are emitting carbon dioxide. (The distinction is important because, according to the U.S. Environmental Protection Agency, while methane, CH4.has a shorter lifetime in the atmosphere, it is also more efficient at trapping radiation than carbon dioxide. “Pound for pound,” EPA calculates, “the comparative impact of CH4 on climate change is 25 times greater than CO2 over a 100-year period.”)

But there are other very complicated factors at workthat may be able to reduce a portion of these threatening carbon molecules. “We don’t know enough about the vegetative ecosystems in the arctic,” Wilson said. “It maybe they will increase productivity or there will be species shift in vegetation and that by increasing productivity thru warming and perhaps more access to  nutrients, they may actually absorb more carbon dioxide from the atmosphere and may actually offset some of the emissions.”

Wilson said that researchers are still in the early phase of getting all of the new physics, biology and chemistry into their models in order to make more definitive predictions about the impacts on the region and the world

Like the President, and most other Alaskan visitors, Wilson was especially euphoric about the spectacular natural environment she has witnessed during her scientific campaigns and the constant immersion in a landscape filled with wildlife. 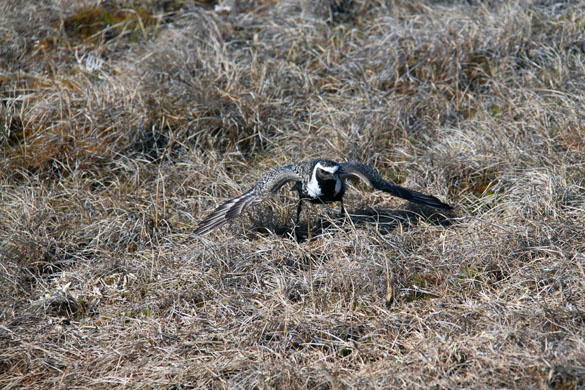 The American golden plover breeds in the Arctic tundra of Alaska and Northern Canada. Courtesy photo 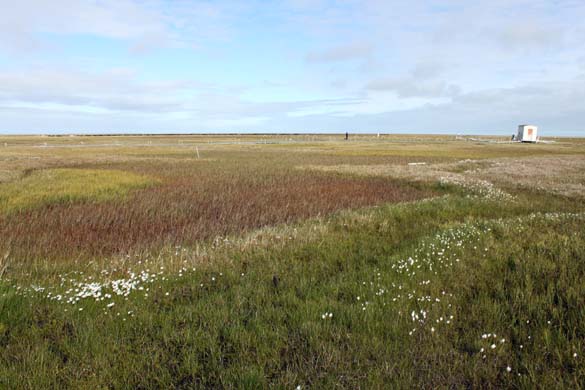 Members of the public who would like to know more about these and other LANL environmental projects might want to visit the Climate Prisms project at the Bradbury Museum of Science. It’s an artistic and innovative experiment, still in progress, about how researchers look at various scales and different processes and measurements. “If people go andinteract with the prism exhibit, they’ll have an opportunity to see what it’s like to be working in an arctic environment from standing on the ground to looking at it from space,” Wilson said.