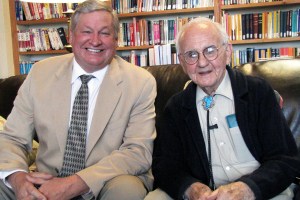 Bill Enloe, left, with Dr. George Cowan at the Santa Fe Institute in December. Photo by Carol A. Clark/ladailypost.com

Santa Fe Institute founder Dr. George A. Cowan and SFI board member Bill Enloe discussed their unique history in an interview on the Behind the White Coat science program in December.

Cowan is a founding director of Los Alamos National Bank and was its chairman for 30 years. Enloe has spent his professional career with LANB and serves as chairman and chief executive officer.

Cowan is a research scientist, academician, businessman and philanthropist. He is a Lifetime Trustee Emeritus and Distinguished Fellow of the Santa Fe Institute, which he founded in 1984 and served as president to 1991.

SFI is a private institution that fosters interdisciplinary research among scientists from the physical, biological, computational and social sciences. From 1949 to 1988, Cowan worked at the Los Alamos National Laboratory, serving as director of chemistry, associate laboratory director of research and senior laboratory fellow. He was appointed to the White House Science Council during the Reagan administration.

In 1990, Cowan received the Enrico Fermi Award for “a lifetime of exceptional achievement in the development and use of energy.”

In 1997, Cowan was elected a fellow of the American Academy of Arts and Sciences. In 2001, Carnegie-Mellon University awarded Cowan an honorary doctorate of science and technology, recognizing his tireless work on behalf of scientific research, ranging from the fields of nuclear chemistry to the study of the physiology of the human brain.

Since 1979, Enloe has served as president and chief executive officer of Trinity Capital Corporation, of which LANB is a subsidiary.

In addition to his work on the SFI board, Enloe participates on many other boards and organizations that serve the communities in which LANB operates. He is a member of the boards of directors of the Delle Foundation, Los Alamos Technical Associates, Inc. and is a managing member of KKSE, LLC.

The Dec. 12, 2011 interview on Behind the White Coat with Enloe and Cowan is broadcast on PAC 8. Visit www.pac8.org for times and dates.