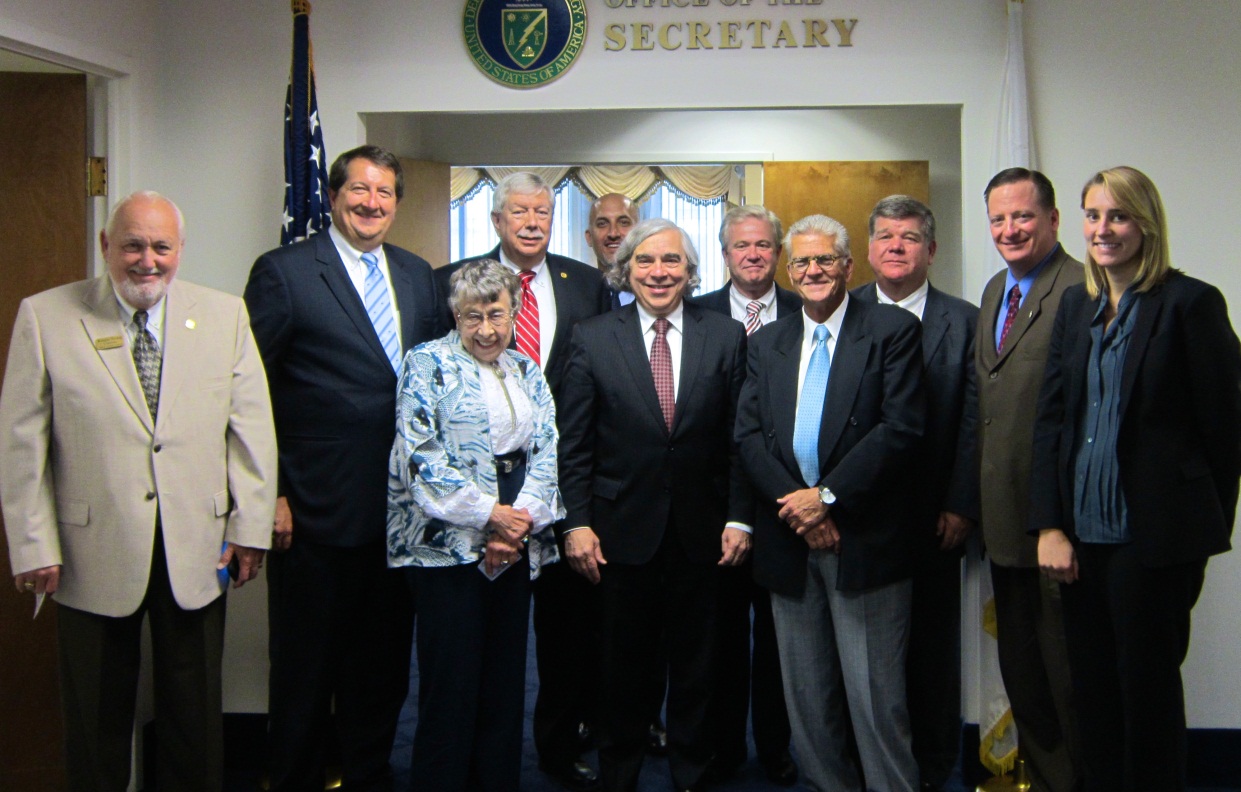 The ECA Executive Board, including Chair Mayor Tom Beehan from Oak Ridge, Tenn., and other elected local government officials also stressed the importance of regular communication and partnership between DOE and the local governments that are adjacent to DOE facilities.  Secretary Moniz agreed that working with local governments is important to the success of DOE.

Local governments can be DOE’s asset for gaining support for missions and for infrastructure development at the sites, but that for that to occur local governments must be involved in decision-making, Beehan said. He also stressed the importance of land transfer to local communities.

ECA Secretary Mayor Steve Young of Kennewick, Wash., offered up his experience in dealing with the Hanford Site, noting that it is much easier to resolve issues that come up at a site when the DOE manager already has a strong working relationship with the local government.

ECA Treasurer Councilor Fran Berting from Los Alamos said that DOE should ensure that there is regular communication between field/site office officials and local government officials; and that DOE Headquarters leadership and staff should make it a priority to meet with and engage local government and community officials during site visits.

ECA Vice-Chairman Councilor Chuck Smith from Aiken County, S.C., identified a concern amongst many communities – the continually changing nature of the mission and the corresponding budget issues.   He gave examples from around all of the DOE/NNSA sites where a project was started, identified as a national priority only to be changed, delayed or cancelled. Smith highlighted that these changes have an adverse impact on the community, including significant job loss.

Moniz identified that DOE needs to exercise more discipline when developing project budgets and clearly understand the design and costs of the projects.  He identified that some projects and their budgets will need to be modified and used CMR and UPF as examples of projects and budgets that have been reviewed and modified.

Other topics addressed in the meeting were: support for the Waste Isolation Pilot Plant (WIPP), and opening it as soon as possible; support for Small Modular Reactors (SMRs); and technology transfer activities; and a solution for the management and disposal of high-level and defense waste. Moniz confirmed that WIPP is still an essential part of the cleanup mission and committed to opening it as soon and as safely as possible.

The Secretary stated that the development of new nuclear technologies, including SMRs, is important for energy needs in the future. He expressed hope that by proceeding through the testing phase and the initial Nuclear Regulatory Commission (NRC) licensing for SMRs, the initial projects will identify the costs and feasibility of the technology and the potential for use in the United States. He agreed that technology transfer activities are important to both DOE and local communities. Finally, he expressed support for consent-based siting activities and stated that he believes that the next step in nuclear waste management and disposal will be the development of a pilot interim storage site initially targeting waste from decommissioned commercial reactors.