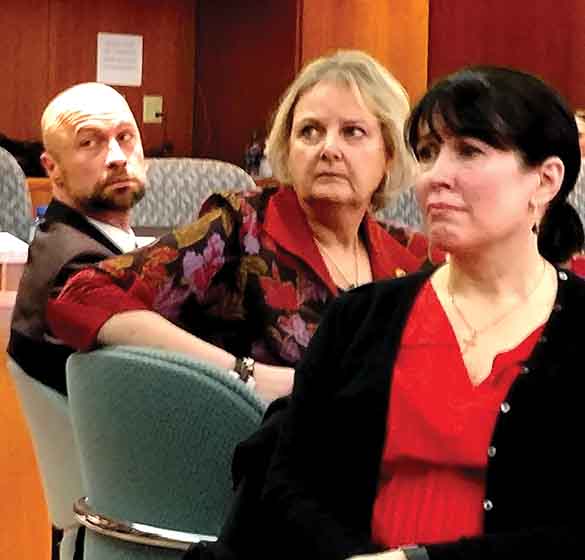 From left, Rep. Bill McCamley of Las Cruces and Rep. Deborah Armstrong of Albuquerque, sponsors of the End of Life Options Act, look on during Friday’s public comment on the bill at the State Capitol in Santa Fe. Dr. Katherine T. Morris, right, an Albuquerque oncologist was a plaintiff in the2014 case that affirmed the principle of the law but was overturned by the New Mexico Supreme Court in 2016. Photo by Roger Snodgrass/ladailypost.com 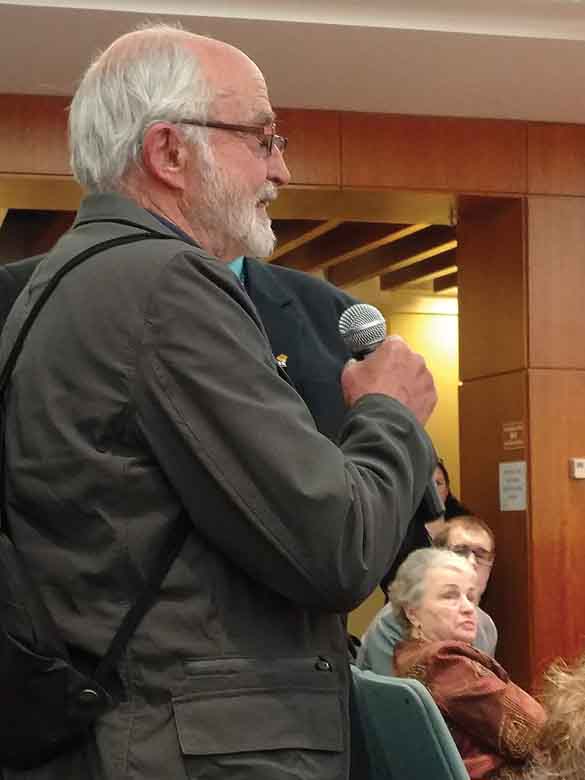 SANTA FE — There was not a dry eye in the committee room Friday at the state capitol as members of the House health panel took up a bill that would extend options available to terminally ill patients.

The bill is sponsored by House Health and Human Services Committee Chair Deborah H. Armstrong, D-Bernalillo and Rep. Bill McCamley, D-Doña Ana, who introduced the measure with personal stories of their own experiences with sickness and death of close family members and friends.

House Bill 171, the End of Life Options Act, proposes to qualify and enable competent adults to choose to have medical assistance to bring about their own death.

Opponents of the bill, at least a couple dozen people including Rep. David Gallegos, R-Lee County, Allen Sánchez, executive director of the New Mexico Catholic Conference of Bishops, an attorney, an anesthesiologist, pastors and a representative of the American Academy for Medical Ethics, among others cautioned against approving the bill, often by way of recounting their own personal experiences with the death of loved ones.

Twenty years ago, New Mexico became the first state in the country to pass a Uniform Health Care Decision Act that granted individuals the right to make his or her own medical decisions about what happens to their own body, but a test case in the New Mexico Supreme Court last year in June overturned an appeals court ruling that included individual options for ending life and left the matter up to the legislature to decide. Principals in that case joined Representatives Armstrong and McCamley at the witness table.

As UNM law professor Rob Schwartz, an advocate for the aid in dying legislation, cautioned that terminology was critical to any discussion of this topic. He acknowledged that there are reasonable disagreements on all sides of the issue, based on personal experience, the diversity of cultures and religions and varying degrees of trust in medicine and government that make this issue difficult to resolve.

He said that the challenge that led to the law under consideration was to recognize widely differing values while protecting individuals from abuse.

But as an expert in the subject, Schwartz anticipated responses from the other side that might load the argument with terms like “assisted suicide, mercy-killing and euthanasia,” and fears of a “slippery slope” in which the control of a profoundly personal decision might fall into the hands of the state or the medical profession. Euthanasia, which means a painless death, can easily be conflated with the same word meaning painlessly put to death – for the sake of convenience or for some other reason than an end of life option.

By coincidence, President Donald Trump’s first U.S. Supreme Court pick, Neil M. Gorsuch, whose nomination was announced earlier in the week, wrote a book on the subject, The Future of Assisted Suicide and Euthanasia.” The marketing material for the book published by Princeton University Press in 2009 claims the book makes a “powerful case” that human life is intrinsically valuable and that intentional killing is always wrong.”

There is a long tradition going back to Hippocrates, the ancient Greek father of medicine that admonishes doctors to “Do no harm,” and can be interpreted as a blanket commandment against harming a living person in any sense. Opponents at the hearing raised the question of complicit aid in dying as a contradiction in terms of the physician’s role as healer.

The proposed bill would allow the patient’s health care provider to provide a pharmaceutical prescription that the patient might take to end his or her life, but with precautions. Safeguards would include the determination that the patient was dying of a terminal disease and that he or she had the mental capacity to make the ultimate decision. The medical practitioners would also have to determine “that he or she has not been coerced” by others, that the person can self-administer the prescription and has been fully informed of alternatives such as hospice and palliative care, which offers ways of reducing pain and stress of a serious illness.

Citizens who spoke in favor of the bill, perhaps twice as many as those opposed, included a pastor, a rabbi, a 30 year hospice care provider and quality of life navigator for stage 4 cancer treatment patients, clinical and medical psychologists, a veteran and several members of the New Mexico Social Workers Association, among many others.

Los Alamos resident Carl Newton told the panel that having witnessed many deaths, including people who could have benefitted from the extended options bill, he was very glad that the conversation had started. “I like the idea of thinking ‘without’ a box,” he said, urging the legislators not to limit themselves by past constraints.

The state of Oregon’s Death with Dignity Act that was passed in 1997 is often cited as a leading example of the practice of physician assisted dying. According to the Oregon Public Health Division records, there have been a total of 1,545 prescriptions for lethal medications authorized under the law, but only 991 patients died from taking the prescribed medicine.

Exposure to the vivid narratives of human life in its final throes, along with the grief and compassion of the survivors, was a wrenching experience for many who attended the hearing. After a morning of probing discussion and intense emotional testimony, the measure passed on party lines by a 4 to 3 vote. It will next be heard in the House Judiciary Committee. Senate Bill SB 252 has been introduced and referred to the Senate Public Affairs and Senate Judiciary Committees. 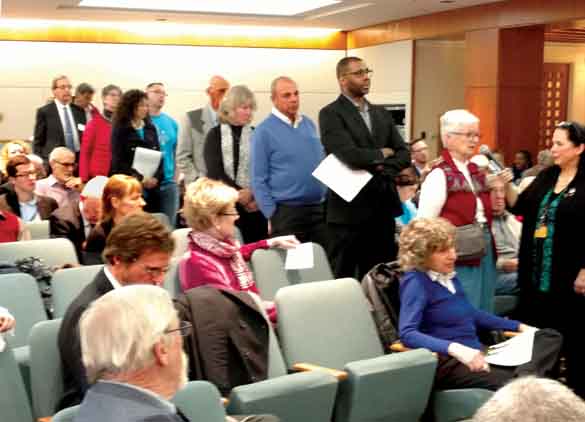 Citizens wait in line to comment on the proposed End of Life Options Act during a hearing of the House Health and Human Services Committee. Photo by Roger Snodgrass/ladailypost.com