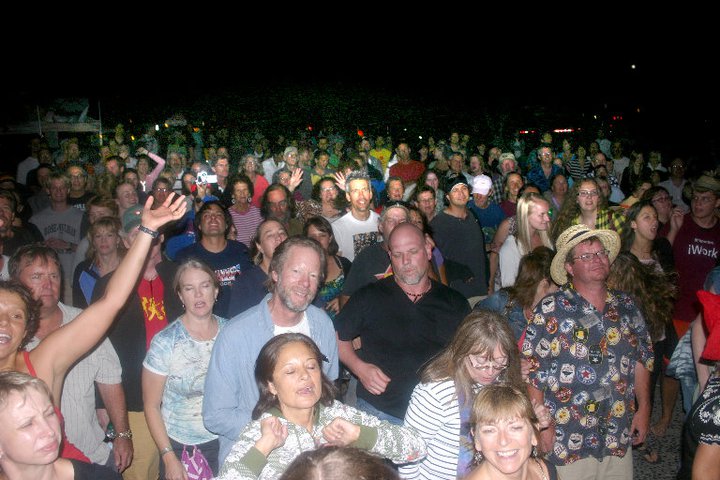 We’re back for a fun-filled weekend. “Ha Ha,” you say. No, it’s the truth! Friday Sept, 14, we have an encore summer concert. LA MainStreet asked us to participate in their Next Big Idea: A Festival of Discovery, Invention & Innovation.

Here’s what we have: 7 p.m. Friday, we’ll be back at Ashley Pond for a concert with Stephanie Hatfield & Hot Mess plus Bill Palmer’s TV Killers, two excellent rock bands from Santa Fe.

Hot Mess is an indie rock band playing mostly original music with a great drummer and loud guitars. Stephanie’s vocals remind folks of Brandi Carlile, Janis Joplin (I asked her to play us a Joplin song), Florence & the Machine, Adele and Sheryl Crow. Stephanie is a rocking singer/songwriter, guitarist and is married to guitarist Bill Palmer.

Bill Palmer’s TV Killers will share the bill. Bill is a rocking singer, songwriter, guitarist and is married to guitarist Stephanie Hatfield. Bill fronts this great rock band that is similar in style to Tom Petty, Neil Young, Ryan Adams and Hatfield’s Hot Mess.
Bill is well known in New Mexico as an award winning record producer. He’s produced records for Stephanie, ThaMuseMeant, Joe West, Goshen and Hundred Year Flood, his very successful critically acclaimed old band. HYF played Los Alamos twice before breaking up. Bill also produced music by Bill Hearne, Boris & the Saltlicks, Ryan McGarvey and many more. Palmer says about record producing, “Vibe is king … Everything else is secondary … Real records are not so much clinical as they are soulful & magical.” The same can be said for performing and I’m really looking forward to this magical show.

The name TV Killers comes from a gig at Santa Fe’s Cowgirl Saloon. It was a Stephanie Hatfield & Hot Mess show and the television at the bar was turned on above the band’s stage. Bill asked the bartender to turn off the tube but he refused. A few other words were exchanged and the band was asked to leave right in the middle of their set. Hot Mess has never returned and the TV Killers won’t be asked. That’s ok. They have great BBQ but it’s terrible place for music. The Stone River Boys put on a sensational show at the Pond a few weeks ago, but at the Cowgirl they were asked to turn it down 10 times! They really shouldn’t book rock bands. Stick with what you do best, Cowgirl.

Saturday, starting at 11 a.m., it’s the Next Big Idea Fest. This growing Fest is starting to be a truly Big Thing. The show has become a “signature event” for LA County, LA MainStreet and the soon to be LA Creative District. They’ll have lots of booths, interactive robots, an amazing immersible dome, a Proctor & Gamble Corvette, a Kraz-E-Science Show, a pet area, music, artists, a beer tent and much more. A disclaimer, the Los Alamos Summer Concert Series is not a sponsor of the music because we can not sell beer at our shows. Anyway, this is going to be a tremendous Festival. You can read more about the Fest at www.nextbigideala.com. Also check out LA Creative Culture District at www.laccd.blogspot.com.

Last, but not least is a special fundraiser for the 2013 Gordons’ Summer Concert Series. China’s Golden Dragon Acrobats return to the Duane Smith Auditorium this Sat. Night. This is an amazing and mesmerizing event.
The discovery of acrobatics goes back at least 4,000 years in China. During the Han Dynasty (221BC-220AD), it was known as the “hundred plays.” It has transformed into various forms of ancient performance art: dance, opera, martial arts, contortion, balancing and sports. It’s a treasure of traditional Chinese art.

The Golden Dragon Acrobats represent the best of this time honored tradition. This production company has won many awards since first being established in 1967.The show features incredible acrobatics, traditional dance, music, spectacular costumes, contortionists and jugglers. A show of fantastic skills and spellbinding beauty!

The Troop has played twice at the JFK Center for the Performing Arts in D.C. They had a six week Broadway engagement at the New Victory Theater and just recently played 5 weeks in Queens. They’ve played all over the world including the Boston Symphony Hall, Popejoy Hall in Abq. and now a second engagement in Los Alamos. The Golden Dragons have 34 years of continuous touring of the US and have played all 50 states (including Las Vegas, Nevada) and over 65 countries on 5 continents. Most of the current touring company performers come from Henan and Hebei, China.

When they played 2 years ago, they brought these great young performers and a tremendous production. It was a spectacular show. If you came two years ago, you must return because I’ve been told that they’ve added a lot of new acts. Try to make the shows and please support live music and theater in Los Alamos. I recommend that you go to Youtube and type in “Golden Dragon Acrobats.” There’s some great footage of past performances there plus at www.goldendragonacrobats.com.

On Sept 19, my good friends Dennis Derkacs and Michael Koster are presenting a show with the great country/Americana star, Rodney Crowell at Santa Fe Sol (AKA Santa Fe Brewing Co.) Read about the show at www.thirstyearfestival.com. It’ll be an excellent show and I thought you may want to know about it.