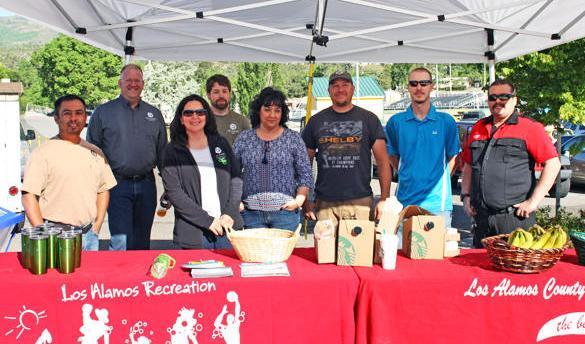 A number of County employees took part in the Bike to Work event held last year. Photo by Kirsten Laskey/ladailypost.com
By BENJAMIN STONE
LAFD EMS Chief
In recognition of this year’s National Bike to Work Week, which is May 13-17, here is some information on Bicycle Safety for Los Alamos County.
In 2017, the United States had 783 bicyclists killed in traffic crashes (NHTSA, 2018). Crashes that involve bicyclists are often much more dangerous to the rider versus a motorist. As riders increase use of bicycles it becomes increasingly important to understand how to prevent crashes and protect yourself in the case of a crash.
Protection is imperative to prevent catastrophic injury during a crash. Items like gloves, helmets and eye protection can not only reduce injury but may prevent a fatal accident. Every bicycle ride should begin with these safety measures. Helmets have been proven to significantly reduce the occurrence of fatal head injuries. Often when a crash occurs, the hands and arms are significantly injured by road rash or even fractures, these injuries can be reduced through the use of gloves. Eye protection is important as they are able to prevent debris from the road from getting into a riders’ eyes, ultimately reducing the risk of a crash.
The National Highway Traffic Safety Association (NHTSA) published the following statistics.

In a recent study conducted by the Los Alamos Fire Department the following statistics were found.

The crash data statistics show that a majority of the incidences in Los Alamos were males (77.27 percent) and the average age of the involved citizen was 36. Crashes on the road were the most common, while cyclists error accounted for 63 percent of those incidences. Drivers error accounted for 22.7 percent of bicycle-related crashes, and mechanical malfunctions were the remaining 13 percent. The injuries recorded were mostly minor accounting for 86 percent while the significant injuries were recorded at 13.6 percent. Two total patients were airlifted due to the severity of their injuries. The community has had no bicycle-related fatalities during the time frame studied. (Stone, 2019)

The most frequent crash locations that LAFD EMS has responded to in the last four years are: Diamond Drive, Rover Boulevard, West Jemez and State Road 4, and each of these locations has more than one incident occurring. Diamond Drive is shown to have the most crashes with eight. The data also showed that off-road riding at the county golf course was the most frequent location for bicycle crashes. Many of the crashes at the golf course occurred during the annual mountain bike race within the community. There were no documented incidences during the local triathlon or the 100-mile Tour de Los Alamos race. (Stone, 2019)
Being prepared for your bicycle ride.
The NHTSA makes the following suggestions:

Ride Predictably:
By riding predictably, motorists get a sense of what you intend to do and can react to avoid a crash.
Drive where you are expected to be seen, travel in the same direction as traffic and signal and look over your shoulder before changing lane position or turning.
Avoid or minimize sidewalk riding. Cars don’t expect to see moving traffic on a sidewalk and don’t look for you when backing out of a driveway or turning. Sidewalks sometimes end unexpectedly forcing the bicyclist into a road when a car isn’t expecting to look for a bicyclist. If you must ride on the sidewalk remember to:
Drivers: Share the Road

People on bicycles have the same rights and responsibilities as people behind the wheel of a vehicle.