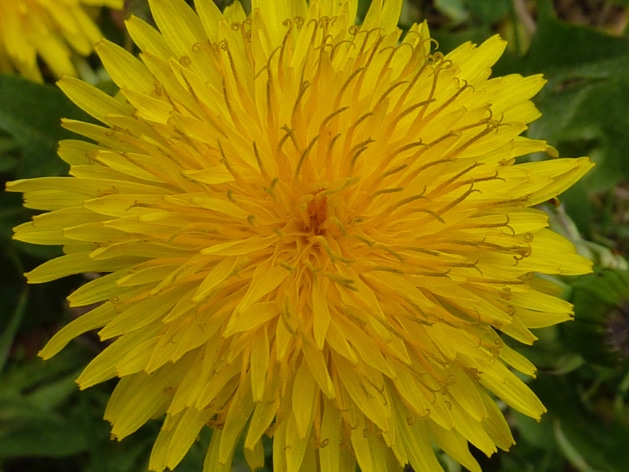 There is far more to dandelions than what meets the eye! Courtesy photo

I really know it’s Spring now because I am seeing one perky little plant popping up its cheery little head everywhere. What a welcome sight, spots of bright yellow among the dull grasses of winter.

Doesn’t everyone have childhood memories of blowing on the dandelion seed puff and making a wish as its silky parachutes catch a ride on the wind? If you don’t, make your own childhood memory now, and blow those wishes away. What mother’s heart hasn’t been touched with joy and love when her toddler hands her a dandelion bouquet?

In America thousands of dollars and much energy is spend annually eradicating it from the “picture Perfect lawn”. It doesn’t have stickers or thorns, prickly hairs, poison roots, seeds, leaves, or flowers and it does not cause wind born allergies, so why is it persecuted? Maybe that is why it has so many aliases: Chicoria, Priest’s Crown, Dent de Lion, and more. But a dandelion by any other name is still Taraxacum officinale.

This cosmopolitan plant is a member of the Asteraceae family and originally made its home in Greece. European settlers brought its seeds with them to the New World where it quickly naturalized.

Almost everyone knows this plant. Rising from a rosette of dark green deeply toothed leaves is a shiny purplish stem crowned with a golden yellow flower, each bloom is made of numerous florets and contains a copious supply of nectar. The tap root is dark brown on the outside and white on the onside. The whole plant except the flower, exudes a milky sap that is very bitter to taste.

You can forecast the weather and tell time by closely observing the dandelion. In sunny weather all parts are open and outstretched. If it becomes cloudy, if rain threatens, it quickly closes the whole head. Even the nighttime dew scares this shy flower and by 5 p.m. it has closed up for the day. Beekeepers value the dandelion, as it is an early bloomer that continues until late autumn when other flowers have ceased to bloom. Their blooming cycle makes it a valuable food plant for honey and native bees.

All parts of the dandelion are collected and used. The young leaves are a great addition to salads or on sandwiches or steamed or sauteed like spinach. The leaves contain 7,000 unit of vitamin A per ounce. A carrot has only 175 units per ounce. One half cup contains B vitamins, iron, protein, quite a power packed little plant. The flowers are edible, adding flavor and color to salads and spreads. I coat them in a sweet tempura batter, sauté them in sunflower oil, dust lightly with organic powered sugar and serve as appetizers.

The roots are gathered in the spring for medicinal value and in the fall for its food reserve. Traditionally the roots are dried, roasted, ground and drunk as a coffee substitute. (Unlike coffee it is not a stimulant) I mix the roasted root with the roasted roots of burdock and chicory for a robust tea that contains no caffeine, only nutrition and flavor.

European herbalists consider the dandelion one of the best herbs for building up the blood when a person has anemia. As a diuretic (makes you urinate) it is used in kidney, bladder, hypertension disorders. Unlike pharmaceuticals, it does not leach potassium from the body. In fact, it adds potassium. It has been cultivated and used in India as a remedy for liver complaints. It is included in herbal formulas for gallstones, as its taraxacim content stimulates the flow of bile.

The dandelion is a humble plant, hunted down like an outlaw or terrorist. And yet, it continues to bloom and bring joy to children and mothers everywhere, and good health to all its human friends.

Protecting the dandelion protects the bees, the environment and us.

But you are also on the most Unwanted list

They poison the earth trying to eliminate you

What makes people hate you when you but grow where you are needed most?