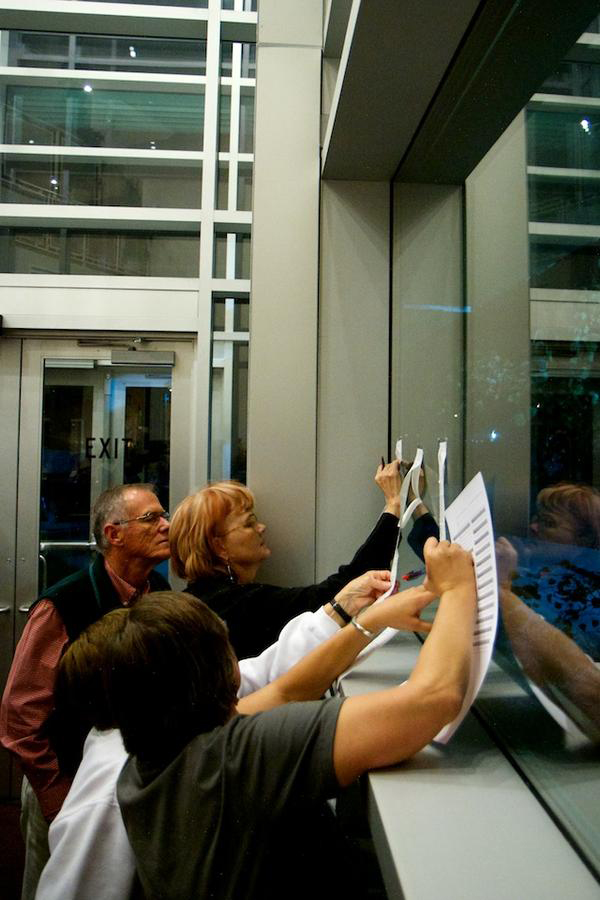 Robert Gibson, Bonnie J. Gordon, JoAnn Johnson and Karen Kendall review poll results. Photo by Salvador Zapien/ladailypost.com
By Carol A. Clark
The Los Alamos County Clerk’s Office reports that Los Alamos County voters cast 10,684 ballots in the 2012 General Election, which came to a close Tuesday night.
The majority of those votes were cast early or absentee with 3,528 cast on election day, Nov. 6.
Voters approved all four proposed Charter Amendments, which was a highly contested issue throughout the campaign season.
LAGRI President Robert Pelak, the group opposing the proposed charter changes, issued the following statement:
“This year has seen a lively debate on four amendments to the Los Alamos County Charter on the matters of initiative, referendum, recall and charter amendment. Our goal of engaging citizens and raising consciousness on these important issues has been met. We are disappointed that these proposed amendments have been adopted. We wish to thank all of our supporters for their efforts in this important election. The Los Alamos Governmental Review Initiative will continue to work for meaningful citizen participation in the operation of our local government.“
In the House District 43 race, Republican Rep. Jim Hall carried Los Alamos but his Democratic challenger Stephanie Garcia Richard won the seat district wide.
The upset in the County Council race was the defeat of incumbent Vincent Chiravalle who came in fifth in the six-person race for three available seats.
County Council Chair Sharon Stover terms out Dec. 31 and won handily over opponent Nathan Hjelm in her bid for Los Alamos County Clerk.
Stover is married to Steven Girrens, one of three candidates elected to the Los Alamos County Council. Stover’s final day on Council is Dec. 31 and her husband’s first day on Council is Jan. 1.
Successful council candidate Pete Sheehey issued the following statement this morning: “I am honored and excited to have this opportunity to serve the community. Thank you to all the council candidates for running a positive campaign, and thank you to all the people who supported me. I also want to thank outgoing councilors Mike Wismer, Sharon Stover, and Vince Chiravalle for their service to our community.”
Below are comments from each of this year’s candidates.
Candidates comment on their victory:

STEPHANIE GARCIA RICHARD
“Thanks to all the voters who spoke with me at their doors and shared with me their concerns, to all the volunteers who helped me and to Jim Hall for a race well run.” -Dist. 43 Rep. Stephanie Garcia Richard, Democrat

KRISTIN HENDERSON
“I did not do this alone but with the help and support of so many people … mothers and their children and their husbands … it’s so important that they have a voice and I will bring their needs and concerns forward to the council.” -Councilor Elect Kristin Henderson

STEVE GIRRENS
“I am humbled by the confidence the voters have placed in me.” -Councilor Elect Steven Girrens

PETE SHEEHEY
“I knocked on 3,000 or 4,000 doors and after I introduced myself, I listened … now the real work begins and I want to bring the concerns I heard from citizens during the campaign forward to see how they can be addressed.” -Councilor Elect Pete Sheehey

SHARON STOVER
“I’m excited to begin my work in the County Clerk’s Office and very appreciative that the community has given me this opportunity.” -County Clerk Elect Sharon Stover, Republican
Candidates comment on their defeat:

JIM HALL
“First of all I want to extend my heartfelt thanks to everyone who supported me and worked for me. I wish Stephanie the best and hope she is successful in representing the district.” -Rep. Jim Hall, Republican

VINCENT CHIRAVALLE
“I congratulate Kristin, Steve and Pete on being elected to the county council and I wish them well. I want to thank the people who voted for me, my supporters who helped my campaign and my mother who was my campaign treasurer. It has been a privilege and an honor for me to serve on the council.” -Incumbent Council Candidate Vincent Chiravalle, Republican

MARC CLAY
“Just 19 votes separated me from Pete Sheehey and my first thought was of the Maxwell Smart saying, ‘Missed it by that much.’ I just want to say that our campaign team did our best and that we are all behind the new councilors and along with the community will hold them accountable to represent us well.” -Council Candidate Marc Clay, Republican

MICHAEL REDONDO
“I have learned so much and met so many great people during this campaign … I will consider serving on a board such as the Planning and Zoning Commission.”-Council Candidate Michael Redondo, Democrat
Menu
LOS ALAMOS