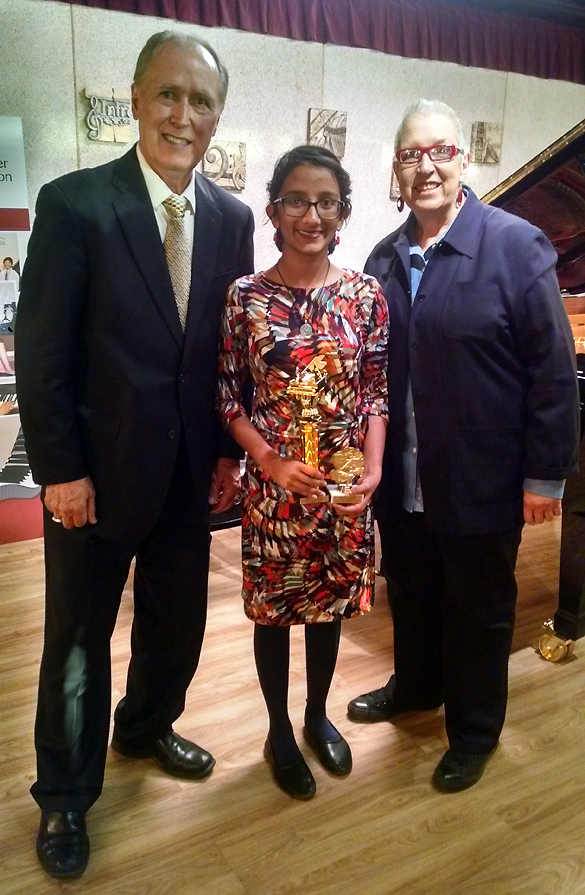 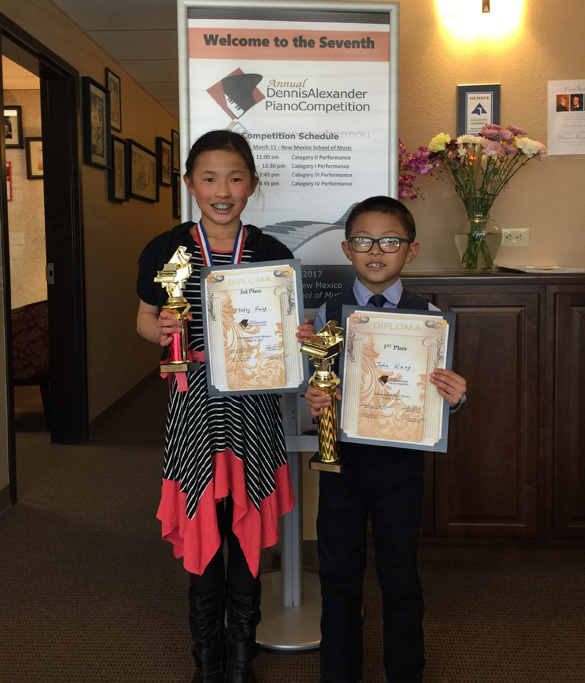 Pianists Betty and John Kang with their awards at the Dennis Alexander Piano Competition. Courtesy photo

Eight young Los Alamos pianists, ages 8 through 14, competed Saturday, March 11 in the prestigious Dennis Alexander Piano Competition, held annually in Albuquerque at the New Mexico School of Music. All eight came away victorious, having earned either First, Second, Third or Honorable Mention Prizes in their respective age categories, being among a total of 27 competitors from throughout New Mexico.

This is the seventh year of the competition, Co-Founded by Composer/Pianist Dr. Dennis Alexander and Dr. Tatiana Vertrinskaya, head of the NM School of Music. The contest is divided into four different age categories from ages 7 through 15 years.  All students and their respective teachers select their own program of one composer’s composition(s), then are also required to perform a work by Dennis Alexander, selected from a prescribed list for each level. Each performance level has a time limit from six to 10 minutes.

Los Alamos pianists literally swept the competition this year, with two First Place winners, and two each for Second, Third, and Honorable Mention prizes. Each prize winner earns a substantial cash award. Additionally, every competition entrant receives a medal, an engraved certificate, valuable comments from each of the three professional judges, and a personally autographed new piece of music by Dennis Alexander. This year’s two Los Alamos First Prize winners were from the youngest and the most advanced divisions.  John Kang, age eight, won Level I with his performance of three pieces selected from Dimitri Kabalevsky’s Op. 27 and Op. 39 (Dance on the Lawn, Prelude in G minor, and A Short Story), concluding with Dennis Alexander’s Spinfest.  This was John’s second competition, having previously won Second Prize in the District Honors Competition last fall.

John was very gracious about his winning, saying “I am honored—and surprised—to win this competition because I think others played very well, too. This is not due to my own effort, but the team effort of Dr. Madeline, my parents, and myself. I enjoy playing the piano and will always continue doing it.” John is a third-grader at Barranca Mesa. His parents are Ning Tao and Qinjun Kang.

Young artist Sruthi Garimella, a 14-year-old freshman at Los Alamos High School, ended her performance by being awarded a literal Trifecta of awards:  First prize in Level IV—and then additionally being selected for the Best Performance of a Dennis Alexander Work, and being further selected as  the competition’s very first recipient of the Mary Israel Young Artist Award, which is a $300 award for the most outstanding young performer in the entire competition. Sruthi’s program was a vibrant performance of three of Poulenc’s Improvisations, each work an homage to a special individual:  No. 1 to the famous French Pianist Madame Marlieve de Long; No. 12 to Franz Schubert; and the poignant No. 15, dedicated to the French chanteuse Edíth Piaf. Her selected Dennis Alexander piece was the virtuosic Toccata Lyrica.

When speaking about her elation at winning all three awards, Garimella i reflected that she  ” … was pleasantly surprised and humbled. I owe it to my teacher Dr. Madeline Williamson for teaching me the art of music and not just playing the notes, but advising me to play with passion and confidence.”  Garimella was also the state-wide Winner for her division in the NM State Honors Competition, held last November in Albuquerque. Her parents are Madhavi and Rao Garimella.

Two other of the youngest students entered their first competition and received high praise for their future potential from the three judges.  Emily Xu, 8, was awarded Second Prize, Level I, for two pieces by Carol Klose that are contrastingly poetic and playful, performing Dreaming in Watercolors and Sea Otter Splash. Her Dennis Alexander work was Valse Semplice. Having studied for only one year, Altai Prechtel, also 8, earned the Honorable Mention for her performance of Mystical Dance by Dennis Alexander and J.S. Bach’s Prelude in C minor, BWV 999. Emily’s parents are Min Chen and Chonggang Xu of Los Alamos while Altai’s parents are Hanna and Martín Prechtel of Ojo Caliente.

The Level III award winners were Lenny Svyatsky, 12 and Betty Kang, 11. Lenny was awarded Second Prize for his performance of J.S. Bach’s Partita No. I, BWV 825: Prelude, Menuet I, and Gigue. His Dennis Alexander work was Scherzo Capriccioso. Betty was awarded the Third Prize for two works by French composer Jacques Ibert, performing his Giddy Girl and Little White Donkey. She selected Tango a la Mango for her Dennis Alexander work. Concluding the weekend competition, pianist Sonya Svyatskaya, 14, was awarded Honorable Mention in Level IV for her performance of two Chopin Waltzes, Op. 64, No. 2 in C# minor and the brilliant E minor waltz, Opus Posthumous. Sonya selected Topaz Nocturne for her Dennis Alexander work. Svyatskaya has previously been awarded Second at Dennis Alexander as well as Second Prize at the NM State Honors Competition. Betty’s parents are Ning Tao and Quinjun Kang, while Natasha Sherman and Danill Svyatskyi are the parents of Lenny and Sonya.

The Dennis Alexander Piano Competition is a 501-c3 non-profit organization, supported solely through the generosity of individual and business donors throughout New Mexico.