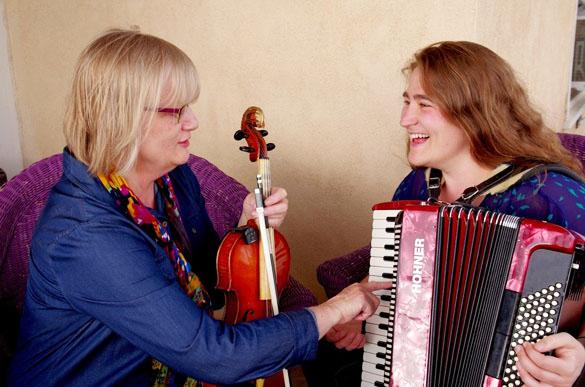 When two classically trained musicians who play a variety of instruments and have fallen in love with every kind of folk music came together, the result was Edith Boulevard. Edith Boulevard’s January concert was cancelled because of bad weather. It’s been rescheduled for Sunday Feb. 24. The eclectic folk/classical duo will perform on violin, viola, accordion, keyboard and clarinet at 7 p.m.  at the Los Alamos Nature Center Planetarium. The community is invited to arrive at 6:30 p.m. for treats and conversation. Suggested donation is $10-20. RSVP to lucille.frey@gmail.com.

Deb Bluestone and Clara Byom are both transplants to Albuquerque and have developed a deep love for the city. Edith Boulevard is one of the longest streets in Albuquerque, and also happened to be the street Bluestone lived on.

“We like the deep sense of place in the name,” Bluestone said. “That’s important to us. It gives us something to live up to and inspires us to grow.”

Edith was a real person, the daughter of the engineer who helped create the street, she said.

Around four years ago, Bluestone heard Byom playing clarinet with another band.

“I was desperate for a clarinet player!” Bluestone remembered.

The band’s slogan, “Intersections of Place, Time and Creativity”, pretty much sums up their repertoire and their performances as well. This concert is no exception. Named “Snöflinga”, it includes Swedish, Scottish, Cajun, old time American, Northern New Mexican music, original pieces written by Byom and a new classical contemporary piece, “The Landscape Listens” by accordionist Guy Klucevsek.

“We like to draw from as many places as possible and tie everything together with a theme,” Byom said.

“We like to perform music people haven’t heard before,” Bluestone said.

Another dimension is the visual. Winter inspired scenes will appear on the dome of the planetarium.

With all this variety, Bluestone and Byom have a lot to choose from when picking a favorite genre. Both of them say they love to play for dancers.

“You’re changing their movement and energy and you get to watch it happen,” Byom said.

Trained as a classical violinist/violist Bluestone now spends most of her stage time playing Americana and folk music in a variety of settings with a number of different bands. A founding member of The Thrifters and Edith Boulevard, Bluestone works at Robertson & Son’s Violin Shop in Albuquerque.

She also performs regularly with Dust City Opera and serves on the board of the New Mexico Folk Music and Dance Society.

A graduate of the University of New Mexico (Master of Music in Clarinet Performance and Musicology), Byom has researched mid-century American klezmer music for her master’s thesis. She is the newly minted development director at the Klezmer Institute in New York City.