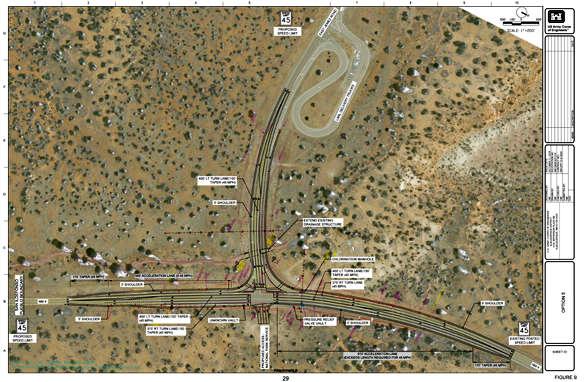 Conceptual design plan of one of the options for the intersection at East Jemez Road and N.M. 4. Courtesy image
By KIRSTEN LASKEY
Los Alamos Daily Post
kirsten@ladailypost.com
Traffic accidents and long lines of cars alternating between shuffling forward and braking are a common occurrence at the intersection of East Jemez Road and N.M. 4.
The NNSA Los Alamos Field Office is addressing these issues as well as improving transportation of transuranic waste to the Waste Isolation Pilot Plant in Carlsbad.
A proposed option is currently being pursued by the field office. According to a Traffic and Concept Design prepared by 3AEGreen for the U.S. Army Corps of Engineers, the following changes to the intersection are being considered:
In an email to the Los Alamos Daily Post, Carol Brown of the NNSA Los Alamos Field Office explained the current stage of the proposed project.
“The U.S. Army Corp of Engineers needs to finalize the contract with 3AE GREEN to continue design work … Once the final design and the construction cost estimate is complete, NNSA will evaluate whether sufficient funding remains to proceed with construction. This decision will be made in consultation with the New Mexico Environment Department and the New Mexico Department of Transportation,” Brown said.
Numerous entities are stakeholders in this project including Los Alamos County. Other stakeholders include the National Park Service, San Ildefonso Pueblo, Santa Fe, the Department of Energy, New Mexico Department of Transportation and the New Mexico Environment Department.
According to the Draft Traffic and Concept Design report, the engineer’s opinion is that the construction cost would be $3.6 million for the preferred option. However, this does not include design, construction management and testing.  It is stated in the report that all of this would be an additional 20 percent of the cost.
In her email, Brown said the proposed project is being pursued for several reasons.
She said, “The main reason this project was proposed was to improve DOE-owned transportation routes at Los Alamos National Laboratory used for the transportation of transuranic waste to the Waste Isolation Pilot Plant. Other benefits of reconstructing the intersection would be to improve the safety of the intersection and traffic flow. By providing a fourth leg of the intersection into the National Park Service proposed parking lot, this will significantly increase the safety of visitors of Tsankawi section of Bandelier National Monument.”
Los Alamos County Public Works Department Director Philo Shelton said he feels the project would be beneficial to drivers.
“The design allows twice as many cars through the intersection than what we get today,” he said.
He noted the New Mexico Department of Transportation is planning road improvements along N.M. 4 such as shoulder work sometime in 2022.
“There’s other improvements this will match into in the long term,” Shelton said.
A number of options were reviewed for the intersection, but Brown said the option being pursued, or option #5, is preferable because, “The design firm took into account Los Alamos County’s previous intersection design and assessed the current traffic data to provide the best solution based on what our needs were,” she said. “After multiple consultations with New Mexico Department of Transportation, Los Alamos National Laboratory, National Nuclear Security Administration, Los Alamos County, Santa Fe County, Pueblo de San Ildefonso, Los Alamos County Transportation Board and National Park Service, the initial three options were refined and ultimately option 5 was unanimously recommended by the above stakeholders.”
Furthermore, she told the Daily Post, “The road surface is highly degraded. Obviously, this would improve the safety of those trucks (delivering the transuranic waste).”
Shelton pointed out it also would help with the safety of everyone on the road. He said there are “a lot of collisions at the intersection overall, adding, “It would just add much needed turn lanes to make it much safer.”
Menu
Los Alamos
91°
Sunny
5:48am8:23pm MDT
Feels like: 91°F
Wind: 8mph ENE
Humidity: 6%
Pressure: 29.77"Hg
UV index: 7
TueWedThu
90/64°F
91/64°F
88/64°F
Weather forecast Los Alamos, New Mexico ▸