Early Socialization for Dogs and Cats is Critical 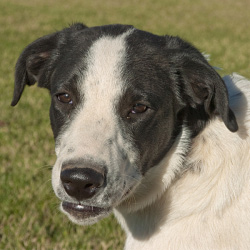 Reggie. Courtesy/Friends of the Shelter

This is Reggie. He came to the Los Alamos Shelter about 10 months ago.

He was surrendered at five months of age, along with his four littermates. All of the pups were extremely fearful. They were in a new place, and a certain level of trepidation was to be expected. But these youngsters were not just shy, they were downright terrified of people, and shrank away from any and all forms of human contact.

Why were the puppies so afraid of humans? It wasn’t because they’d been abused

They hadn’t been beaten or harshly handled. But they had been neglected, left mostly to their own devices alone with their mother day-in and day-out. As a result, the pups missed out on a critical period of socialization when they were very young, and had simply never become comfortable with the sight, sound, smell or touch of humans.

Sadly, the plight of these pups is not unique. Many of the animals who come to our shelter have been left in back yards or confined to pens during the early part of their lives, and have had little or no interaction with either people or other animals.

In order to grow into the well-mannered, well-socialized dogs and cats every adopter is looking for, puppies and kittens need to learn early on how to get along with other members of their own species and with adults and children of all shapes, sizes and ages. Thankfully, under-socialized kittens that cannot be tamed can often find homes as barn cats. There is not a similar alternative for puppies that are not social.

To help Reggie and his littermates improve their chances of getting adopted, Los Alamos Shelter volunteers worked tirelessly to help them learn to accept human contact.

Regular dog brigade members spent hours on end sitting in the puppies’ kennel tossing treats and talking quietly in kind tones. Eventually a few of the pups began to come closer and take treats from outstretched hands, and not long after were even willing to accept a gentle scratch on the chest or behind the ear.

Soon the braver ones like Reggie were accompanying volunteers for walks — at first just a few feet from the shelter, and eventually all the way to the nearby dog park — learning to ride in cars, and how to tolerate the hubbub of local festivals and adoption events.

Today, Reggie is doing well and would love to show off what a great, brave fellow he is. His other littermates have either been adopted or are in foster care, and Reggie is eager to find a home of his very own. All four of these sweet pups have come a long way, and all they need to blossom into wonderful adults is a little extra help from a patient owner.

Come by the shelter today to meet Reggie and find out how to help dogs like him have a chance at a happy, long life and a forever home.

NOTE: Friends of the Shelter volunteers encourage people to get their animals spayed and neutered to prevent unwanted litters and can help with vouchers that give a discount when participating vets are used.