E.U. and U.S. to Extend Scientific Cooperation on Measurements and Standards 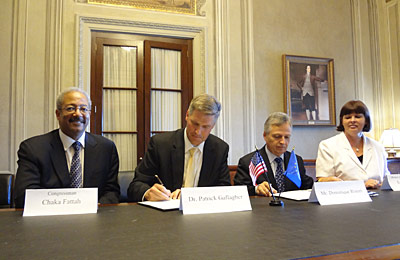 The European Commission’s Joint Research Centre (JRC) and the U.S. Department of Commerce’s National Institute of Standards and Technology (NIST) yesterday agreed to expand their current scientific cooperation to include new areas of research, such as energy, healthcare and clinical measurements, and food safety and nutrition.

Under Secretary of Commerce for Standards and Technology and NIST Director Patrick Gallagher and JRC Director General Dominique Ristori held a signing ceremony during Transatlantic Week, an annual event intended to raise the profile of the transatlantic relationship as well as to foster a dialogue on shared purpose and joint action among U.S. and E.U. policymakers.

NIST and the commission have collaborated on many projects since the signing of the U.S.-EU Agreement on Scientific and Technological Cooperation in 1997. The new Implementing Arrangement expands on previous collaboration and provides joint access to scientific infrastructure, the exchange of scientific and technological information and experts, and support for training scientists, engineers and technical experts. The arrangement is initially for five years and can be extended.

While NIST and the JRC, the commission’s in-house science service, have a history of working together, this overarching agreement replaces individual agreements on each project. It also provides additional focus on shared research priorities, including potential new areas such as security technology and systems, and environment and climate.

Speaking at the signing ceremony, JRC’s Ristori said, “The Implementing Arrangement we signed will create an overarching framework for a cross-Atlantic cooperation on standards and measurements in a wide range of areas. It will also serve as a leading example in the process towards setting global standards.”

“The new agreement affirms our relationship, and we look forward to new and exciting areas of interaction that will ultimately serve to support the relationship between the European Union and the United States,” Gallagher said. “By working together, we can take advantage of each other’s respective strengths to further the science. And ultimately, we will benefit from being on the same page as the science matures and allows us to establish and implement these new technologies.”

Both organizations have the strategic goal to support competitiveness and economic growth, and have cooperated on standardization since 2007. The Implementing Arrangement encompasses 10 areas related to standards and measurements. Environment and climate, energy, transportation and security are high on the collaborative research agenda. In addition to reference materials in a range of areas, the cooperation will include research on civil engineering structures (such as bridges, roads and dams) and emerging information and communication technologies, as well as marine optical radiometry.

As a non-regulatory agency of the U.S. Department of Commerce, NIST promotes U.S. innovation and industrial competitiveness by advancing measurement science, standards and technology in ways that enhance economic security and improve our quality of life.