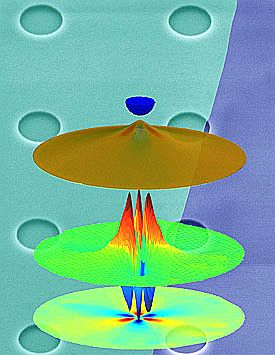 NIST researchers showed that straining graphene membrane creates pseudomagnetic fields that confines the graphene’s electrons and creates quantized quantum dot-like energy levels. The background is a false color image of the graphene drumheads made from a single layer of graphene over 1 micron-sized pits etched in a silicon dioxide substrate.Credit: N. Klimov and T. Li, NIST/UMD

Tightening or relaxing the tension on a drumhead will change the way the drum sounds.

The same goes for drumheads made from graphene, only instead of changing the sound, stretching graphene has a profound effect on the material’s electrical properties.

Researchers working at the National Institute of Standards and Technology (NIST) and the University of Maryland have shown that subjecting graphene to mechanical strain can mimic the effects of magnetic fields and create a quantum dot, an exotic type of semiconductor with a wide range of potential uses in electronic devices.

Graphene is a single layer of carbon atoms arranged in a honeycomb lattice.

Able to conduct electricity with little resistance at room temperature, graphene is a prime candidate for applications ranging from flexible displays to high-speed transistors.

However, the same lack of electrical resistance that makes graphene attractive for some uses also makes it ill-suited for digital computing applications.

Graphene conducts electricity so well because it doesn’t have a band gap—an energetic threshold beneath which the material won’t conduct electricity. This means that graphene can’t be turned “off,” and computers need “on” and “off” signals to transmit and process information.

Because substrates slow the speed of electrons moving through graphene, Nikolai Klimov, a University of Maryland postdoctoral researcher working at NIST, suspended the graphene over shallow holes in a substrate of silicon dioxide—essentially making a set of graphene drumheads.

To measure the graphene’s properties, the team used a unique scanning probe microscope designed and built at NIST.

When they began to probe the drumheads, they found that the graphene rose up to meet the tip of the microscope— a result of the van der Waals force, a weak electrical force that creates attraction between objects that are very close to each other.

“While our instrument was telling us that the graphene was shaped like a bubble clamped at the edges, the simulations run by our colleagues at the University of Maryland showed that we were only detecting the graphene’s highest point,” NIST scientist Nikolai Zhitenev said. “Their calculations showed that the shape was actually more like the shape you would get if you poked into the surface of an inflated balloon, like a teepee or circus tent.”

The researchers discovered that they could tune the strain in the drumhead using the conducting plate upon which the graphene and substrate were mounted to create a countervailing attraction and pull the drumhead down.

In this way, they could pull the graphene into or out of the hole below it.

And their measurements showed that changing the degree of strain changed the material’s electrical properties.

For instance, the group observed that when they pulled the graphene membrane into the tent-like shape, the region at the apex acted just like a quantum dot, a type of semiconductor in which electrons are confined to a small region of space.

Creating semiconducting regions like quantum dots in graphene by modifying its shape might give scientists the best of both worlds: high speed and the band gap crucial to computing and other applications.

According to Zhitenev, the electrons flow through graphene by following the segments of the hexagons.

Stretching the hexagons lowers the energy near the apex of the tent-like shape and causes the electrons to move in closed, clover-shaped orbits—mimicking nearly exactly how the electrons would move in a vertically varied magnetic field.

“This behavior is really quite remarkable,” says Zhitenev. “There is a little bit of electron leakage, but we found that if we complemented the pseudomagnetic field with an actual magnetic field, there was no leakage whatsoever.”

“Normally, to make a graphene quantum dot, you would have to cut out a nanosize piece of graphene,” NIST fellow Joseph Stroscio said. “Our work shows that you can achieve the same thing with strain-induced pseudomagnetic fields. It’s a great result, and a significant step toward developing future graphene-based devices.”

The work was a collaborative effort with the University of Maryland, College Park, and the Korea Research Institute of Standards and Science.