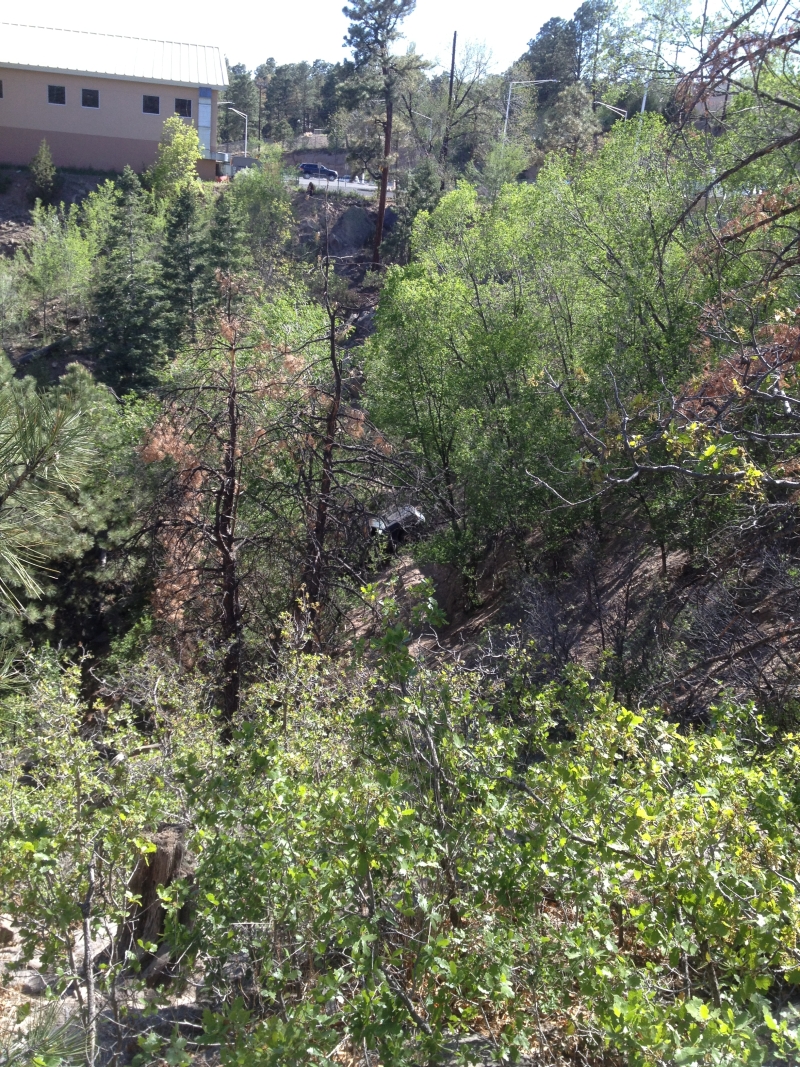 The driver of the pickup seen in the middle of this photo was reportedly inhaling fumes from an aerosol can prior to careening into the canyon near the Los Alamos Baptist Church (in background) on Diamond Drive. Photo Courtesy Wayne Hardie

The driver of a pickup was seen swerving on Los Alamos streets some five minutes before he veered onto the sidewalk along Diamond Drive and drove approximately 100 feet before crashing through a fence and careening more than 50 feet into Pueblo Canyon behind the Los Alamos Baptist Church.

Several citizens spotted Matthew Weinman, 22, of Los Alamos driving recklessly and alerted police who caught up to him where his pickup came to rest precariously in the canyon.

“Mr. Weinman had been inhaling fumes from an aerosol can prior to crashing,” Sgt. James Rodriguez said. “The initial call from a citizen came in at 3:05 p.m. saying he was swerving and driving in an unsafe manner.”

Weinman survived the crash with relatively minor injuries, Rodriguez said. He had a couple of cuts and scrapes on his face, some bruises and a couple of bumps on his head.

Weinman’s crash was one of four accidents that occurred Sunday. The first took place in the early morning hours with a vehicle that collided with a deer on West Jemez Road near the Emergency Operations Center. The driver was uninjured, the deer died, Rodriguez said.

At about 11:30 a.m. Sunday, Kyleigh Foster, 18, of Los Alamos crashed her vehicle coming out of the Jemez.

“She told police she fell asleep,” Rodriguez said. “She drove 130 feet off the roadway and into the forest. She had three passengers in her vehicle and one of them sustained a broken arm.”

At about 2 p.m. Sunday, a couple from Albuquerque riding a motorcycle apparently misjudged the curve near the Los Alamos/Sandoval Couty Line. The driver laid the bike down at a guard rail. The woman was riding on the back and smashed her face into the windshield of the bike. She sustained lacerations to her face and some head trauma.

Because the severity of her head trauma was not known and Los Alamos Medical Center is not a head trauma hospital, the woman was airlifted out, Rodriguez said, adding that the driver sustained road rash injuries. Alcohol was not a factor in the accident and the driver was cited for careless driving.

Rodriguez explained that Memorial Day Weekend is known as one of the most dangerous times for traffic accidents. He cautions drivers to be extremely careful on the roadways and reminds everyone not to drink and drive.