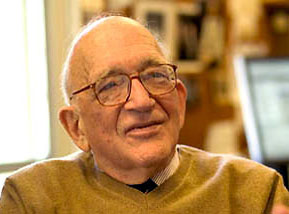 Sidney Drell, physicist, arms control expert and adviser, is one of 12 eminent researchers recently named by President Obama as a recipient of the National Medal of Science.

In addition, 11 inventors are recipients of the National Medal of Technology and Innovation. Both awards represent the highest honors bestowed by the United States Government upon scientists, engineers and inventors. “I am proud to honor these inspiring American innovators,” President Obama said. “They represent the ingenuity and imagination that has long made this nation great — and they remind us of the enormous impact a few good ideas can have when these creative qualities are unleashed in an entrepreneurial environment.” Drell was recognized for his research on quantum electrodynamics and quantum chronodynamics and for applying basic physics to public policy, national security and intelligence. Drell, a reitred member of the Board of Governors for both Lawrence Livermore National Security LLC (LLNS) and Los Alamos National Security LLC (LANS), the managing contractors for the Lawrence Livermore and Los Alamos national laboratories since 2008 and 2007, respectively, is a senior fellow at the Hoover Institution where his work has focused on nuclear nonproliferation.

He also is a professor of theoretical physics (emeritus) at the Stanford Linear Accelerator Center (SLAC), Stanford University.

He served as SLAC’s deputy director until retiring in 1998, and has been active as an adviser to the executive and legislative branches of government on national security and defense technical issues.

He is a founding member of JASON, a group of academic scientists who consult for the government on issues of national importance. For more than 25 years, Drell has supported the University of California (UC) in its management and oversight of the two laboratories. He served as the founding chairman of the UC President’s Council on the National Laboratories and as the founding chairman of the council’s National Security Panel.

Prior to the formation of the UC President’s Council, he served on a predecessor group, chaired by former Lawrence Livermore Director Herbert York, that reviewed the mission work at the laboratories. In recognition of his many achievements, Drell has received numerous awards including the Enrico Fermi Award, a fellowship from the MacArthur Foundation and the Heinz award for public policy.

Most recently, Drell received the National Nuclear Security Administration (NNSA) Administrator’s Gold Medal of Excellence for Distinguished Service, the highest honorary award granted by the NNSA in recognition of his many years of exceptional contributions to Los Alamos and Lawrence Livermore national laboratories, the NNSA, the Department of Energy and the nation.

In addition, he was a member of the recent search committees for the Los Alamos and Lawrence Livermore laboratory directors. The National Medal of Science was created by statute in 1959 and is administered for the White House by the National Science Foundation. Awarded annually, the medal recognizes individuals who have made outstanding contributions to science and engineering.

A committee of Presidential appointees selects nominees on the basis of their extraordinary knowledge in and contributions to chemistry, engineering, computing, mathematics, or the biological, behavioral/social and physical sciences. Drell will formally receive his award from President Obama at a White House ceremony to be scheduled in early 2013. For more on the National Medal of Science and National Medal of Technology and Innovation and a complete list of award recipients, go to the White House Website.