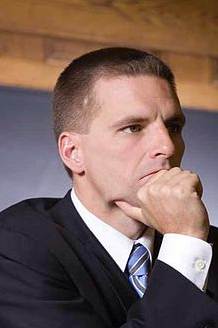 WASHINGTON, D.C. – Dr. Steven Croley was confirmed by the Senate Monday as the Department of Energy’s General Counsel.

“Dr. Croley brings to the Department leadership team both extensive experience representing the interests of the United States and wide-ranging interests in energy and environmental issues,” Energy Secretary Ernest Moniz said. “I thank the Senate for approving his nomination, and I look forward to his advice and counsel. I also thank Anne Harkavy for serving as Acting General Counsel in his stead. Her leadership has proven to be invaluable in recent months.”

The Office of General Counsel provides legal advice, counsel, and support to the Secretary, Deputy Secretary, and program offices across the DOE complex to help further the Department’s mission of advancing national, economic, and energy security of the United States through scientific and technological innovation and the environmental cleanup of the national nuclear weapons complex. As General Counsel, Dr. Croley will work with a team of attorneys to ensure the Department operates in full compliance with the law.

In 1993, he joined the faculty at the University Michigan Law School, where he was later named the Harry Burns Hutchins Collegiate Professor of Law. From 2006 to 2010, Dr. Croley was the Special Assistant to the U.S. Attorney for the Eastern District of Michigan. He also served as a research consultant to the Michigan Law Revision Commission, the U.S. Department of Labor, and the Administrative Conference of the United States and worked as a law clerk for Judge Stephen Williams of the U.S. Court of Appeals for the D.C. Circuit.

Dr. Croley received the American Bar Association’s award for Distinguished Scholarship in Administrative Law in 2004 and was elected to the American Law Institute in 2010. He received an A.B. from the University of Michigan, a J.D. from Yale Law School, and a Ph.D. in Politics from Princeton University.