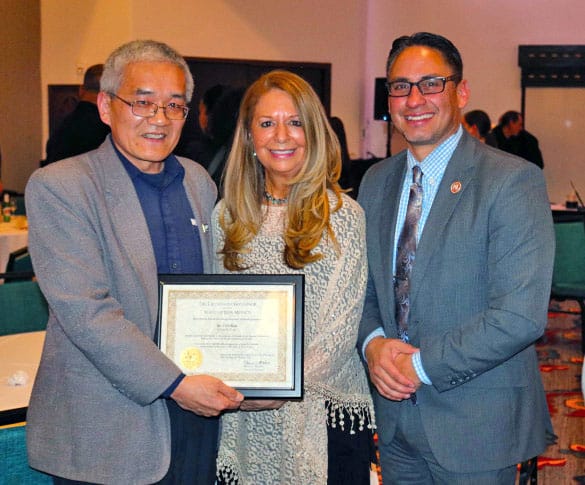 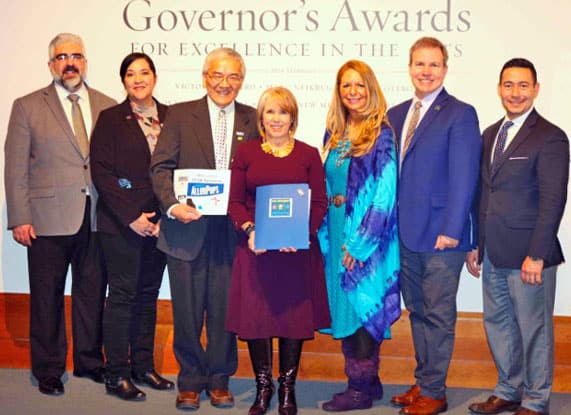 Dr. Cliff Han, inventor of AllerPops and Los Alamos resident, was recently honored by Lt. Gov. Howie Morales at an awards reception at the La Fonda Hotel in Santa Fe.

Han also was recognized by Rep. Joseph Sanchez and by Gov. Michelle Lujan Grisham on the House Floor at the State Capitol.

AllerPop lollipops is a revolutionary allergy remedy that gives people all-natural allergy relief that lasts for months because it corrects the allergy cause without using local pollens. The root of allergies is an oral probiotic deficiency. Knoze Jr. can not only treat allergies with AllerPops but also prevent allergies.

Allergy is a common disease that became an epidemic in the last 30-50 years. Currently, it impacts 10-30 percent of the human population around the world. In the US, it is estimated that 50 million people have allergies, either seasonal or long term. It cost more than $5 billion in the U.S. in 2018 and expected to expand to $40 billion in 2025.

Current medicine for allergies only relieves symptoms temporarily with significant side effects. AllerPops targets the cause of allergies, resulting in lasting relief with minimal side effects.

The AllerPops business idea started with Han’s family. From infancy, Han’s son had allergies for years. As a medical doctor, a biologist, and of course, a father, he wanted to find a solution. The opportunity came when he developed his allergies in 2014. He started to collect samples and data on his allergic reactions.

In the spring of 2017, he revealed the secret behind allergic reactions that nobody had discovered. The application of his newly found theory, AllerPops, relieved him and his family’s allergies shortly after. Knoze Jr was first established to study the allergies and then to market and distribute AllerPops Prebiotic Lollipop.

After the discovery of the cause of allergies, the first significant effort was to protect the intellectual property by submitting multiple patent applications. Knoze Jr has awarded three patents for method and composition that treats allergies, and three others are pending. Patent applications to major international markets, such as Europe Union, China, Japan and Korea, will be submitted before the end of 2019.

“I developed AllerPops based on the discovery of allergy cause, oral probiotic deficiency,” Han said. “The beneficial bacteria have a natural function to calm the immune system. Without enough oral probiotics, the immune system surrounding the oral/nasal cavity will become hypersensitive. AllerPops contains cherry-picked nutrition for those bacteria and can restore the natural, peaceful condition.”

Han had been a biologist at Los Alamos National Laboratory (LANL) for 22 years, where he participated in the Human Genome Project. He led a team to complete many hundreds of bacterial genomes and authored more than 300 research papers. Before that, Dr. Han got his Ph.D. from Fudan University, was trained as a medical doctor and worked in a hospital for four years. He also worked at the Quality and Performance Assurance Division in LANL for three years, which prepared him in business administration, especially in quality control.

As a biologist without any business experiences, Han had been lucky surrounded by many great fellow entrepreneurs and advisory organizations. He has been learning a lot of skills from different sources.

“Most importantly, I have been working with both Joe Montes and Julianna Barbee at the Small Business Development Centers at Los Alamos and Espanola. I am in debt of Joe Montez for his coaching on both personal and business fronts,” Han said. “Julianna has extensive experience in marketing, media and public relationships. Their advice has propelled the progress of my company.”

The Service Corps of Retired Executives (SCORE) at Santa Fe is another organization Han has interacted with and where he met with Lee Lefton, Jim Owens and Russ Mooney. Their experiences in business also helped Knoze Jr.

“After the invention of AllerPops, which is a milestone not in my design, several other milestones got the business on the right track: finding the right contract manufacturer, selling on Amazon, selling on knozejr.com, working with SBDCs and SCORE,” Han said. “I have learned plenty of things about how to run my business in the last two years. The most important thing is constantly reshaping myself to fit the development of the business. For example, my recent adaptation is to reduce my function as an omnipotent worker and hire more professional services to meet the need of Knoze Jr. High-quality work from professional services will facilitate market expansion.”

AllerPops is being marketed on local TV, Facebook and Google Ads. Google Ads will coordinate with TV ads to target regions selected from a list of 100 national allergy capitals. The four chosen markets are Albuquerque, San Antonio, Texas, Birmingham, AL, New York, NY. AllerPops are available on Amazon and local drug stores. Log on to AllerPops.com for more information.

“My goal for the business is to make AllerPops the primary choice for people with common allergies in the U.S. and the world in the next 5-10 years,” Han said.

SBDC Director Julianna Barbee is working with Han to help his business grow.

“AllerPops is a growing business on its way to a national market and Dr. Han has what it takes to be a successful entrepreneur,” Barbee said. “Working with him has been like being in a bicycle race, I have become better at my job because he also challenges me. Dr. Han asks Why Not? Instead of What if? Dr. Han truly has the qualities of a successful entrepreneur, he is highly self motivated, and is always willing to learn and step out of his comfort zone, he understands the value of a strong network of experts. He is a risk taker, he embraces every challenge and has a competitive spirit to make it happen no matter what barriers may arise.”

Barbee’s expertise is in broadcast media, marketing and YouTube video production and has been assisting Han in all these areas to help launch AllerPops nationally and internationally.