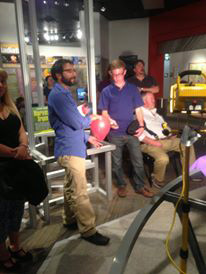 Los Alamos prides itself on its brains. This is a town that loves a great idea and will turn to any number of resources to get one – a laboratory, a library and sometimes even a coffee klatch.

Last year it was within the Cultural Coffee Klatch that an innovative thought was born. This group, which hails from a range of local institutions such as the Bradbury Science Museum and the Los Alamos Historical Society, looked at the nightlife in Los Alamos and came up with a way to attempt to enhance it. It’s called Los Alamos Downtown Friday Nights.

It was a success but we learned some good lessons,” said Linda Deck, one of the organizers.

This year, the organizers coordinated with Russ Gordon, who manages the Summer Concert Series and cut down the number of late night programs from nine to four. The events are also not consecutive. They are held 5-8 p.m. every other Friday night. Two Friday night programs have already been held and the last two are July 12 and July 26.

Another change is that the Los Alamos Creative District has taken over managing the Friday Night programs.

Everyone involved in the Friday Nights program wants to draw people to their establishment to become familiar with them, Deck said.

The Friday Nights acquaint people with the downtown area. By joining cultural institutions with local businesses such as Pet Pangaea and Karen Wray Fine Art Gallery and Studio, people get more of a sense of this downtown, Deck said.

“It’s our way of drawing people into the downtown,” Deck said.

Each participating group or business offers some sort of special program.

For instance, on July 12, in addition to the African Highlife Band performing at 7 p.m. at Ashley Pond, the community can check out the Wallflowers exhibit at the Fuller Lodge Art Center, take their dog for a stroll through the Downtown Dogs Pet Walk at Pet Pangaea, view medieval-era living history demonstrations provided by the Society for Creative Anachronism on the Fuller Lodge Lawn, and learn about nuclear fission in the “Pinocchio Reanimated!” exhibit at the Bradbury Science Museum.

From 4:30-7 p.m., Mesa Public Library is offering games, crafts and a reception for the newest gallery exhibit, “Mostly Clear and Partly Cloudy.”

“We’re partners,” Deck said. “We want to be part of the solution, to bring people to the downtown and make it a very vibrant and active area.”

While it is too soon to tell if these events have any impact on local businesses, Deck said people have been responding positively to the events. For those who host activities, it is another opportunity to do what they do best.

“We come up with cool things,” Deck said. “We have all this to offer. We just want more people to come in.”