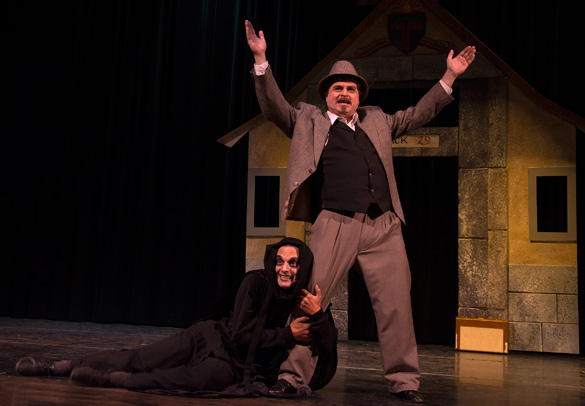 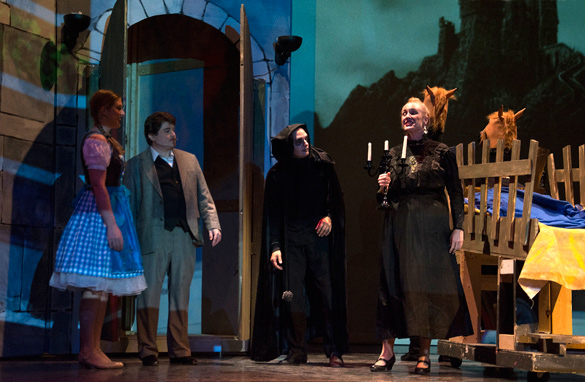 The 1974 classic film, directed by Mel Brooks and co-written by Brooks and Gene Wilder, who also played the title character, was turned into a musical in 2007.

A tribute to the original “Frankenstein” (1931) and shot in black and white, the film has been oft ranked as one of the funniest movies ever made and the musical theater version is just as hilarious.

The story revolves around neurosurgeon Frederick Frankenstein (John Cullinan) who has spent his life resisting his famous grandfather’s legacy as a mad scientist and even pronounces his name fronk-en-stoon to avoid guilt by association.

Called to Transylvania upon the death of the elder Frankenstein, Frederick, assisted by hunchbacked right-hand man Igor (Patrick Webb) and sexy lab tech Inga (Joy Reynolds), and egged on by Grandpa’s girlfriend Frau Blucher (Suzy Koehn),  soon finds himself embracing the family business and creating a Monster of his own (played by Fred Berl). Hijinks ensue.

The sophomoric bawdy humor for which Brooks is famous is front and center in “Young Frankenstein,” so don’t bring little ones unless you want to spend a lot of time explaining why everyone is laughing.

The musical numbers were my favorite part of the evening. Musical director Gretchen Amstutz, who also conducts the wonderful pit orchestra and director-choreographer Patrick MacDonald truly bring out the best in the cast, as the principals and the (large!) chorus sing and dance their way into our hearts.

Favorite numbers of mine include “Together Again for the First Time,” in which Frederick and Igor form their bond; Frau Blucher’s lament “He Vas My Boyfriend;” and last but definitely not least, “Puttin’ On The Ritz,” where director Patrick MacDonald performs a stunning tap routine as the Monster’s shadow. Oh heck, all the musical numbers are great. 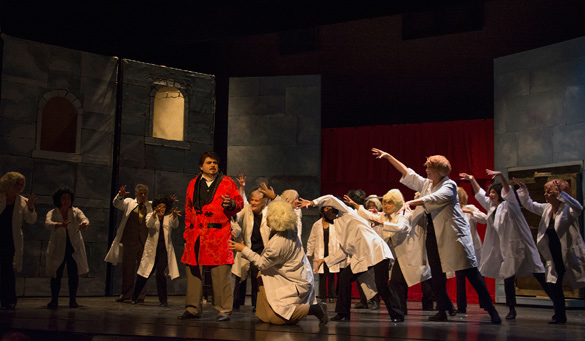 A chorus of mad scientists urges Frederick (John Cullinan) to ‘Join the Family Business.’ Photo by Larry Gibbons.
Everybody rises above a few audio glitches, courtesy of the Duane Smith sound system.

The golden-voiced Christina Martos, as Frederick’s over-the-top fiancée Elizabeth, is a vocal standout, as are Joy Reynolds as Inga  and Suzy Koehn as Frau Blucher.

Cullinan does a great job as the nebbishy but loveable Frederick and also has a fine voice. Berl manages to make the Monster likeable and “human” in full monster makeup, as well as to tap dance in six-inch shoe lifts.

Patrick Webb as Igor steals every scene he’s in. His comic gifts are one of the things that really make the show work. He sings, he dances and he’s really, really funny. 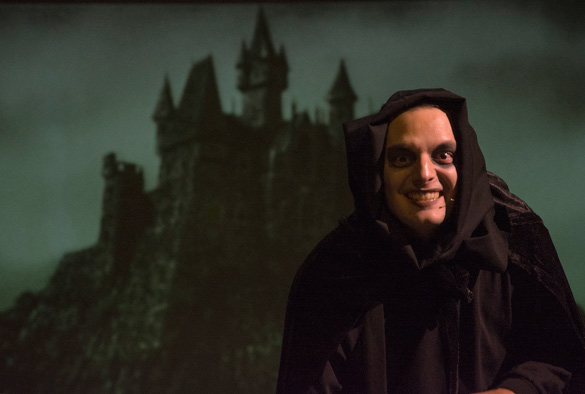 Okay, let’s just say you gotta see this. You’ll be amazed how something so silly can utterly steal your heart. And it will take days to get the songs out of your head.

The Los Alamos Light Opera’s production of “Young Frankenstein continues at 2 p.m. today and 7:30 Oct., 9 and 10 at the Duane Smith Auditorium in Los Alamos. Tickets can be purchased at CB FOX, at the door or online at Brown Paper Tickets: http://www.brownpapertickets.com/event/2055226.