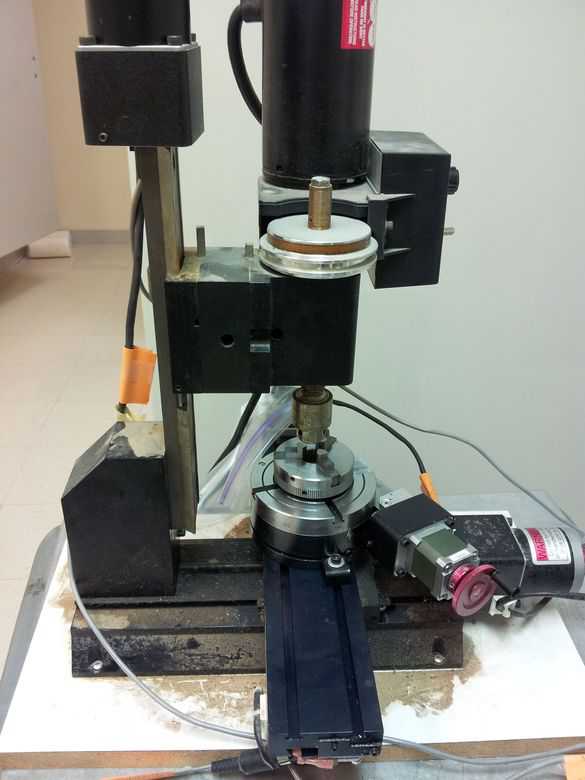 This mill was donated to the Hive and is available for use. Courtesy Photo

Over the weekend Richard Browning, Jung Pyo Hong and Sam Park have been working to restore the machine, which was probably made in the mid to late 80’s, so that members of the Hive can use it to create prototypes and models.

The machine has four axes; X, Y, and Z and a rotary table that you can clamp work to and rotate under computer control. According to the Sherline website, compared to a lathe, “Sherline milling machines can perform all of the tasks and operations that a large commercial machine can perform. Operations such as fly cutting, precision drilling, and boring are all routine tasks for the Sherline mill. Because the tool turns rather than the work, much larger parts can be worked on in a mill, and these parts need not be round.”

If someone used a CAD program to design a 3-D part, and then converted that design into a G-Code program, the Sherline 5400 can use the instructions in the G-Code program to create the part. In 1974, Sherline products became popular with the model community, because their mills and lathes made it possible to build tiny replicas of trains and other intricate machines. Other people use them to make working machines, like model airplanes that fly.

For programmers and inventors who know how to use it, the possibilities are endless. Browning is restoring the Sherline 500 so that it can be used with open hardware. The only flaw in the donated machine at this time is that the rotary table only moves in one direction.  This will be corrected.

Next step is to replace the aged interface electronics with open hardware and use open software such as Linux and EMC2.  Then, software programmers and electronics engineers would be attracted to the project.

“I see it as a learning tool,” said David Jones, the steward of the Hive. “People can use it to learn about machining and how AutoCAD can talk to machines.”

The Hive had it’s grand opening in December. It was once an underutilized space that has been converted into a co-work space for freelancers, inventors, entrepreneurs and other professionals. Rather than purchasing a traditional workplace, users can rent office space, conference rooms and even lab space to conduct experiments and create prototypes.