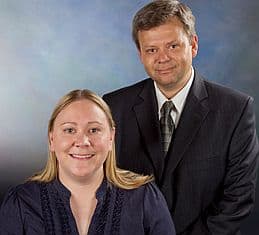 Amy Clarke of Los Alamos National Laboratory’s Metallurgy group and Ivan Vitev of the Lab’s Nuclear and Particle Physics, Astrophysics and Cosmology group are among the recipients of the DOE Office of Science 2012 Early Career Awards.

The DOE Office of Science recently announced the researchers who have been selected for a financial award under the fiscal year 2012 Early Career Research Program.

The funding opportunity for researchers in universities and DOE national laboratories supports the development of individual research programs of outstanding scientists early in their careers and stimulates research careers in the disciplines supported by the Office of Science.

Clarke’s award project, In‐situ Monitoring of Dynamic Phenomena during Solidification, focuses on the ability to visualize experimentally and model theoretically the melting and solidification processes of metal alloy materials, even at elevated temperatures.

The project will use novel tools and unique probes, such as synchrotron X‐ray and proton radiography and tomography, at national laboratory facilities that have not yet been used in the United States for this purpose. Modeling these processes will enable the prediction of the microscopic structure of metal alloys, even under harsh environments and will enable new understanding of a range of energy materials, such as wind turbine blades and lithium rechargeable batteries.

Clarke received a doctorate in metallurgical and materials engineering from the Colorado School of Mines.

She is a former Seaborg Institute postdoctoral fellow at Los Alamos and a recipient of The Minerals, Metals & Materials Society (TMS) Young Leaders Professional Development Award.

Vitev’s award project, Jet Probes of a New State of Matter, will advance the theory of jets in nuclear collisions and employ these jets as powerful probes of the strongly interacting plasma.

He will identify experimental observables that can differentiate between competing paradigms of particle production and interaction in the quark-gluon plasma. The expected outcome of this project will be a significant reduction of the current large uncertainty in the determination of plasma properties such as density, opacity, and transport coefficients.

Vitev received a doctorate in theoretical nuclear physics from Columbia University and then joined LANL as a J. Robert Oppenheimer Postdoctoral Fellow. He has received a prestigious Presidential Early Career Award for Scientists and Engineers (PECASE).

The honor is the highest bestowed by the U.S. government to outstanding scientists early in their careers.

About the DOE Office of Science Early Career Awards

The mission of the Office of Science is to deliver scientific discoveries and major scientific tools to transform the understanding of nature and to advance the energy, economic, and national security of the United States. The Office of Science gives Early Career Awards in the following program areas: Advanced Scientific Computing Research (ASCR), Biological and Environmental Research (BER), Basic Energy Sciences (BES), Fusion Energy Sciences (FES); High Energy Physics (HEP), and Nuclear Physics (NP). Recipients of the Early Career Awards are within 10 years of having received a doctorate and are either untenured assistant professors on the tenure track, untenured associate professors on the tenure track, or full-time, nonpostdoctoral, permanent DOE national laboratory employees. The 68 recipients for fiscal year 2012 were chosen based on peer review of about 850 proposals.