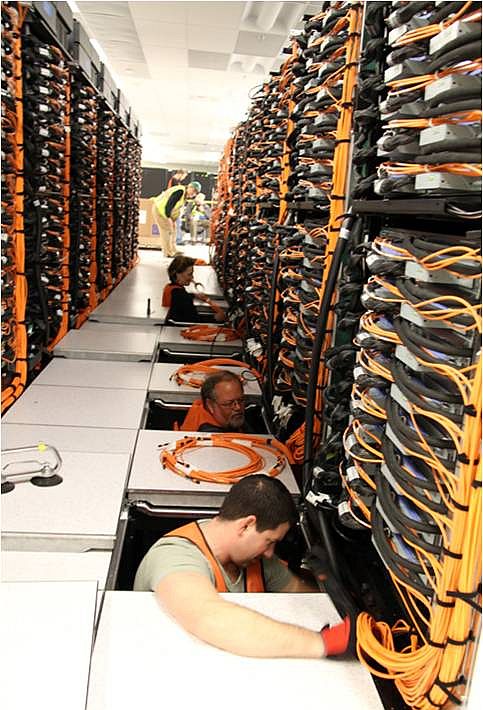 Sequoia, an IBM supercomputer at Lawrence Livermore National Laboratory (LLNL) in California, was on June 18, 2012 named No. 1 in the TOP500, a list of the world’s fastest supercomputers. Here, Sequoia is installed in LLNL’s Terascale Simulation Facility in April 2012. Courtesy/LLNL

WASHINGTON, D.C. – Under an initiative called FastForward, the Department of Energy (DOE), Office of Science and the National Nuclear Security Administration (NNSA) have awarded $62 million in research and development (R&D) contracts to five leading companies in high performance computing to accelerate the development of next-generation supercomputers vital to national defense, scientific research, energy security, and the nation’s economic competitiveness.

“The challenge is to deliver 1,000 times the performance of today’s computers with only a fraction more of the system’s energy consumption and space requirements,” said William Harrod, division director of research in DOE Office of Science’s Advanced Scientific Computing Research program.

Contract awards were in three high performance computing (HPC) technology areas: processors, memory, and storage and input/output (I/O) – the communication between computer processing systems and outside networks. The total value of the contracts is $62.5 million and covers a two-year period of performance.

The FastForward program, funded by DOE’s Office of Science and NNSA, is managed by LLNL on behalf of seven national laboratories including: Lawrence Berkeley, Los Alamos, Sandia, Oak Ridge, Argonne and Pacific Northwest. Technical experts from the participating national laboratories evaluated and helped select the proposals and will work with selected vendors on co-design.

“Exascale computing will be required to fully assess the performance of our nation’s nuclear stockpile in all foreseeable situations without returning to nuclear testing,” said Bob Meisner, head of NNSA’s Advanced Simulation and Computing (ASC) program. “The insight that comes from simulations is also vital to addressing nonproliferation and counterterrorism issues, as well as informing other national security decisions.”

The FastForward initiative is intended to speed up and influence the development of technologies companies are pursuing for commercialization to ensure these products include features DOE Science and NNSA laboratories require for research.

“Recognizing that the broader computing market will drive innovation in a direction that may not meet DOE mission needs in national security and science, we need to ensure that exascale systems will meet the extreme requirements in computation, data movement and reliability that DOE applications require,” Harrod said.

In an era of increasing global competition in HPC, the development of exascale computing capabilities is widely seen as a key to sustaining the innovation edge in the science and technology that underpin national and economic security.

DOE’s Office of Science is the single largest supporter of basic research in the physical sciences in the United States, provides open scientific user facilities – including some of the world’s most powerful supercomputers – as a resource for the nation, and is working to address some of the most pressing challenges of our time. For more information, please visit science.energy.gov.