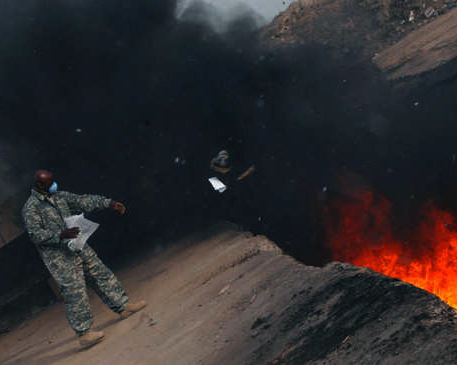 Its closure follows Udall and Corker’s recent call for immediate action to halt the use of open-air burn pits after findings by Special Inspector General for Afghanistan Reconstruction (SIGAR) that found the burn pits were utilized without need and at great danger to the health of U.S. military and civil personnel.

In a letter to Udall and Corker, Lieutenant General Curtis Scaparrotti, director of the Joint Staff, informed the senators that burn pit operations at Camp Leatherneck were officially terminated on July 29, 2013, and that burn pit operations at Forward Operating Base Salerno will be strictly controlled until the base closes in December 2013. In response to the senators’ request, he also indicated that service members’ records reflect their service at specific locations and all are briefed by medical professionals on health hazards at and near each installation, including burn pit locations and operations.

“I am glad to see that the Department of Defense has taken action to halt the use of open-air burn pits at Camp Leatherneck and is working to notify service members of the risk of open-air burn pits, but there is still more work to be done at Forward Operating Base Salerno,” Udall said. “I will continue to push to end this dangerous practice that exposes our men and women to toxic air pollution, especially when other methods of disposal are possible.”

“This decision will limit the effects of open-air burn pit exposure among our troops still serving in Afghanistan, and when coupled with the burn pit registry, it will allow us to fulfill our obligation to make all veterans aware of health risks associated with their service so they can access any related benefits,” Corker said.

Udall and Corker’s action in July was built on bipartisan legislation coauthored by the senators and signed into law earlier this year to create a registry of service members and veterans who were exposed to toxic chemicals and fumes from open-air burn pits in Iraq and Afghanistan.

Udall became an advocate for a burn pit registry after meeting Albuquerque veteran MSgt. Jessey Baca and his wife Maria. MSgt. Baca has faced a multitude of health problems believed to be associated with burn pits and has advocated for helping service members in similar situations.

The law championed by Udall and Corker mandates establishment of an open-air burn pit registry, similar to those created to track Agent Orange and Gulf War Syndrome, for individuals who may have been exposed during their service in Iraq and Afghanistan. It  aims to help the U.S. Department of Veterans Affairs (VA) determine to what extent air pollution caused by open-air burn pits has led to medical conditions among service members. It also includes a public information campaign to inform individuals about the registry and periodically notify registry members of significant developments associated with burn pit exposure.

The registry has not yet been established by the VA, and multiple senators have pressed the VA to accelerate its progress and increase outreach to affected veterans. Udall, a member of the Senate Military Construction and Veterans Affairs Appropriations Subcommittee, successfully included language in the FY 2014 Military Construction and Veterans Affairs appropriations bill urging the VA to detail its implementation efforts for the registry, improve and present a plan for increasing outreach to veterans and their families affected by open-air burn pits, and provide an explanation of how the VA plans to inform VA physicians about the findings of the registry to improve care for veterans. The committee’s report requires the VA to present its plan within 60 days.