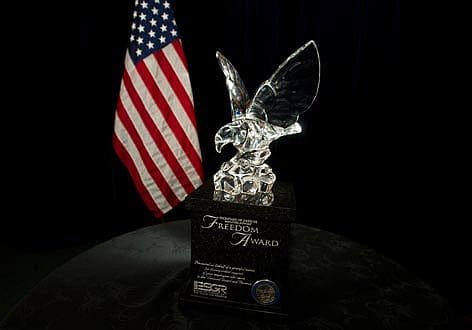 The Los Alamos Police Department has been selected by the Department of Defense as a “Patriotic Employer.”

The chair of the local Employer Support for the Guard & Reserve will present the award to the local police during Tuesday’s County Council meeting, which begins at 7 p.m. in Council Chambers.

ESGR is a Department of Defense sponsored program to help guard and reserve members and to honor employers who do the same.

The Freedom Award is the Department of Defense’s highest recognition for employers supporting members of the Guard and Reserve.

Up to 15 recipients will be announced this summer and honored in Washington, D.C. on September 20 at the 17th annual Freedom Award Ceremony.

Guard and Reserve members, or family members acting on their behalf, nominated their civilian employers for the Freedom Award during the 12-week nomination season.

Guard and Reserve members, who stand ready to serve whenever the nation needs them, often put their civilian lives on hold when they answer the call to duty.

Supportive employers provide a tremendous amount of stability and peace of mind to these citizen warriors and their families, enabling them to continue their dedicated service to our country.

“Guardsmen and Reservists continue to receive outstanding support from their employers,” said ESGR National Chair James G. Rebholz. “America’s employers have not wavered in their commitment to these citizen warriors.”

Almost one-half of the U.S. military is comprised of the Guard and Reserve, and while most employers proudly support their military employees, Freedom Award recipients go above and beyond what is required by law.

Last year’s recipients were nominated for superior acts of support including driving a deployed employee’s children to school, replacing a military employee’s broken family refrigerator while he was serving abroad, and working overtime to cover a service member’s shifts so they could take part in military training.

The Freedom Award was instituted in 1996 under the auspices of ESGR to recognize exceptional support from the employer community.

In the years since, 160 employers have been honored with the award. Established as a DoD agency 40 years ago, ESGR develops and maintain employer support for Guard and Reserve service.

Paramount to ESGR’s mission is encouraging employment of Guardsmen and Reservists who bring integrity, global perspective and proven leadership to the civilian workforce.