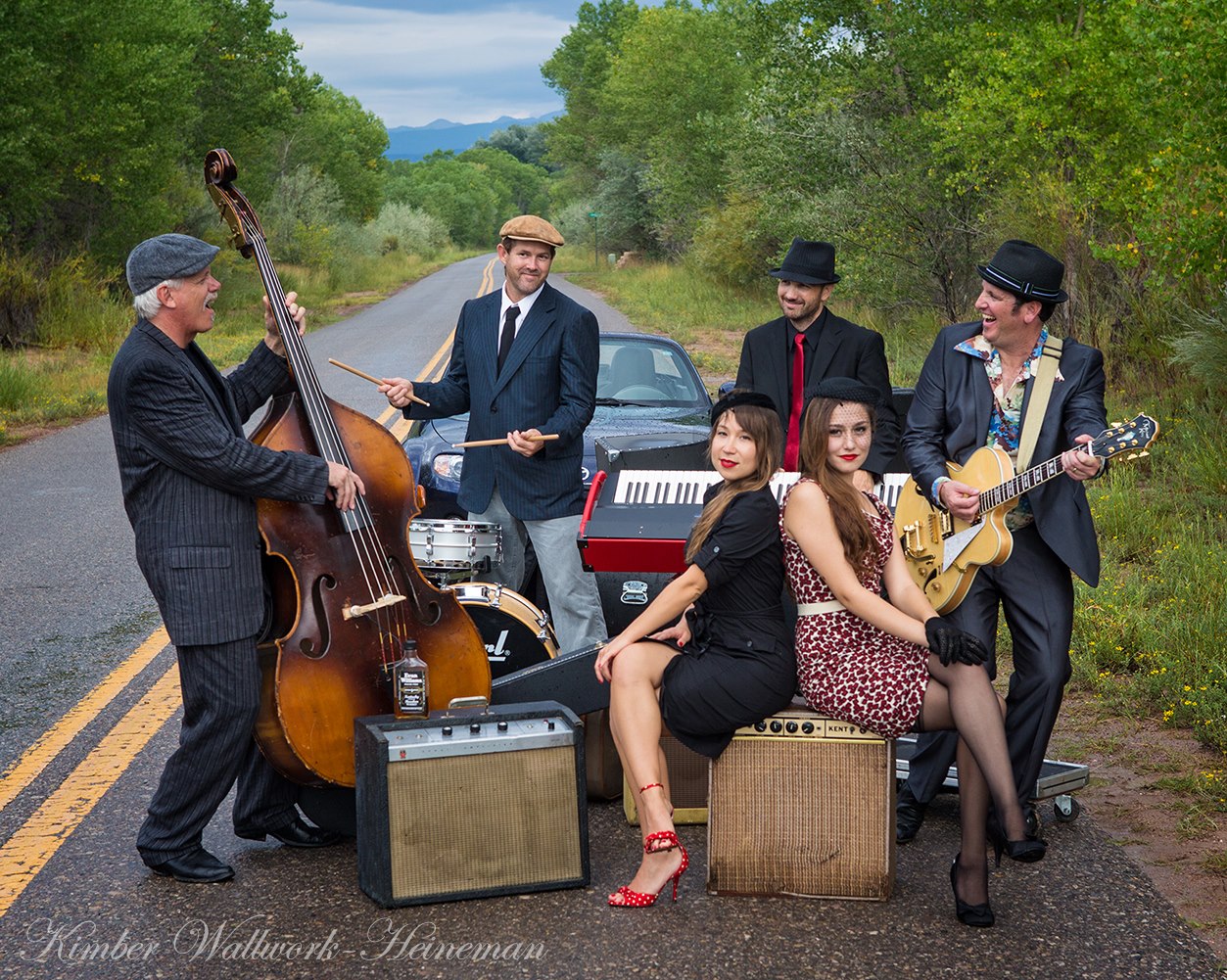 We only have two show dates remaining for the 2013 Los Alamos County Summer Concert Series. What a short, wonderful, quick trip it’s been this year. At 7 p.m. Friday, Aug. 30, we’ll be dancing to the music of DK & the Affordables at Los Alamos National Bank. The show is free.

Tonight is Los Alamos National Bank Night, recognizing a bank that has been a sponsor for all 24 years of the Concert Series’ existence. We sincerely thank them for all that they’ve contributed including being wonderful hosts every year.

DK & the Affordables is a very busy Los Alamos rockabilly, roots-rock, jump blues and swing band. They’ve become favorites at the Pajarito Brewpub & Grill and the Pajarito Ski Hill events. They also have played local casinos, the Cowgirl in Santa Fe and southern Colorado venues. They have become one of the best dance bands in New Mexico and are very entertaining! DK is a great showman.

This Friday night will be a CD Release Party. It’s their first CD and is titled “Jacona Highway.” You can hear The Affordable’s music at www.reverbnation.com/dktheaffordables and on their Facebook page. I don’t have a copy of the disc yet but we have debated the spelling of “Jighway.”

I’ve heard the band a number of times including a fundraiser concert the band  played at the Posse Lodge to help raise money for the 2013 Concert Series. The CD is produced by DK (Dave Warner) and the band’s bassist, the incomparable Rob “Boom Boom” Heineman. DK sings lead and plays guitar. Boom Boom is on bass and vocals. Aaron “Big Air” Anderson plays keyboards and vocals. Scott “Wildman” Beguin’s on drums. Quinn Marksteiner plays baritone and tenor sax and Matt Briggs is also on tenor sax. A big sound!

This Friday night, the band will play some songs by DK as well as cover songs from some of their favorite acts including the Paladins, Nick Curran, Roy (“Whole Lotta Shakin’ Going On”) Hall, the Red Elvises, Ronnie Dawson, Chuck Berry and Southern Culture on the Skids.

Warner said the band, “…kicks out a jiving, jumping, variety of music that is intended to get you moving and inspire good will among the sexes.  Gyrating, swinging bodies topped by smiling faces have accompanied many an Affordables show. Couple that with a twangy guitar, a ripping rhythm section, greasy hair, and some pointy boots and you’ve got yourself a hootenanny of a good time!”

The band loves to entertain you.

The Renegade Mountain Band has a very good site on Facebook and you can read about the Los Alamos Big Band at www.losalamosbigband.com. You can read about the Concert Series at www.gordonssummerconcerts.com. There’s some good comments and a lot of good pictures at Facebook sites for “Fans of the Russ Gordon Concerts” and for “Live entertainment Los Alamos.”

At 7 p.m. Sept. 13, the Series stage will be at Ashley Pond helping with a music production for the Next Big Idea Festival Concert. The show is produced by Los Alamos MainStreet and will highlight some of the town’s school-age entertainers in a Battle of the Bands. You can read more at www.nextbigideala.com.