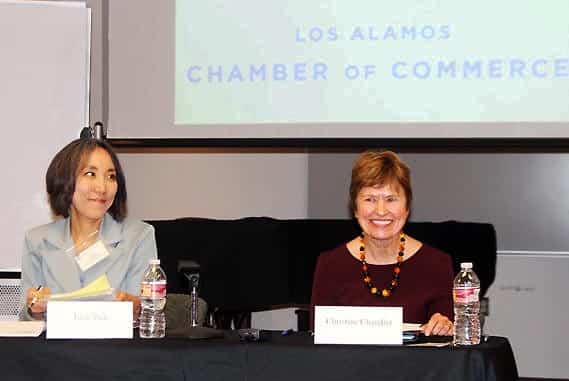 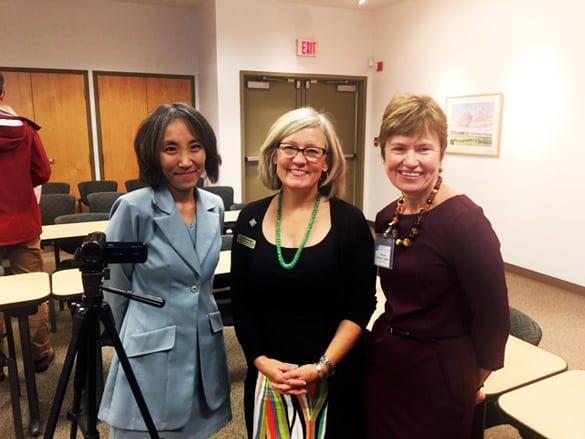 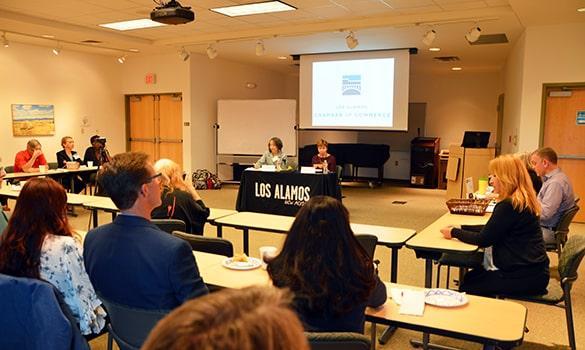 Scene from the Dist. 43 Candidates Forum at UNM-LA Photo by Carol A. Clark/ladailypost.com
By BONNIE J. GORDON
Los Alamos Daily Post
bjgordon@ladailypost.com
Editor’s note: To watch the forum filmed by PAC 8 click here: https://www.youtube.com/ watch?v=4IIEcvTvPGw
Candidates for the New Mexico Dist. 43 House seat made it clear there is an undeniable difference between them during Candidates Forum hosted by the Los Alamos Chamber of Commerce Thursday morning at UNM-LA.

Republican Lisa Shin and Democrat Christine Chandler faced off in front of an audience of Chamber business members and interested citizens. Optometrist Shin stressed her experience as a small business owner and told the audience she would be a strong voice for them in the legislature.

“I will be your advocate,” she said.

Shin promised to improve the regulatory climate for businesses and reduce taxes.

Chandler stressed her experience as a Los Alamos County Councilor and her familiarity with the workings of the legislature. She said education is her top priority. She also expressed concern about the state’s economy and substance abuse plaguing New Mexico.

“As someone whose parents were not able to attend college, I benefited greatly from a good public education,” Chandler said.

Increasing teacher salaries and reducing class size are some of Chandler’s education goals. She wants to encourage partnerships between local colleges and high schools to provide not only academic classes, but career-oriented courses leading to credentials for trades such as machinists.

“Schools need to fairly compensate their instructors if we are to attract and retain good teachers,” Chandler said.

Shin suggested looking to other states for education ideas. She said Colorado spent less and had better outcomes than New Mexico.

“We need to encourage parents in our state to be engaged with their child’s education like parents in Los Alamos are.”

Encouraging reading proficiency by third grade is one of Shin’s top education priorities. She also pointed to encouraging “middle skills” training through community colleges to provide a skilled workforce to attract business to the state.

“I’d love to see more partnerships with the Lab,” Shin said. “We need to become more efficient and exercise fiscal responsibility,” while seeking to improve education.”

“Tax reform is the true key to job creation,” she said.

Shin opposed SB17, which would have imposed gross receipts taxes on non-profit entities such as the consortium that runs Los Alamos National Laboratory. Gov. Susana Martinez vetoed the bill.

“It puts us at a competitive disadvantage,” Shin said.

Why would the Lab remain here if there is a more favorable business climate elsewhere? she said. Shin also said she prefers a sales tax to a gross receipts tax to increase revenue.

Chandler was a supporter of SB17 and would support similar bills. She pointed out that LANL Director Designate Thom Mason supported paying gross receipts taxes.

“The Lab recognizes that they need a town with amenities to attract workers,” she said. “People want to live here now.”

Chandler, an attorney, said tax reform is needed but must be approached with care to avoid unintended consequences. Chandler’s economic priorities include affordable housing and better public transportation. To decrease the reliance of New Mexico on oil and gas, she recommends investing in solar and wind power. Diversifying the economy is important, she said.

While Chandler stressed the role of government in improving the lives of New Mexicans, Shin called state government (and local government) “bloated” with no limits on spending.

“We need to expand the private sector, not government,” Shin said.

This is one race in which there is a clear choice between competing ideologies. The candidates made that obvious Thursday morning.