Disseminating the Kilogram, No Strings Attached 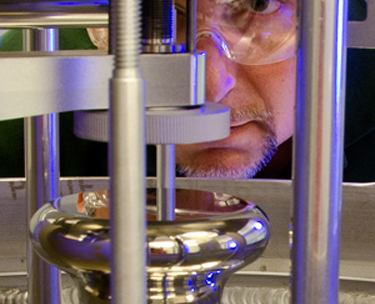 The impending redefinition of the kilogram presents a weighty dilemma. Methods to be used to realize the redefined kilogram are based on the Planck constant and the Avogadro constant respectively and realize the kilogram in vacuum.

But secondary standards, as well as transfer standards for laboratory and industrial use, must be deployed in air.

Devising a practical method of resolving this difference is extremely complicated. Two masses can easily be compared when both are in vacuum. But an artifact’s measured mass in air is affected by air buoyancy as well as the amount of water and other contaminants adsorbed onto its surface.

Correcting for adsorbed water requires precise determination of the volume of the mass and the pressure, temperature, and humidity of the air. Those values are then entered into a model that takes account of the surface properties of the metal or alloy from which the mass is made.

To date, there are no firm consensus data on which to base those models. Experimental determinations of the adsorption of water onto stainless steel, for example, have recorded mass changes that differ by as much as a factor of 15.

So PML’s Quantum Measurement Division has devised an alternative system for direct comparison of a reference mass in vacuum to an unknown mass artifact in air, using magnetic levitation. Patrick Abbott and colleagues in the Mass and Force Group have demonstrated proof of principle using a small tabletop model, and are now at work on a full-scale apparatus about three meters tall.

“No one is really considering us right now,” Abbott says, “and most of the effort around the world is going into adsorption models. But once it gets out that we’ve got this design and it works really well, I suspect that others would want to adopt it because it’s a direct comparison that doesn’t depend on any particular type of material or assumptions of adsorption models.”

The full-scale device, constructed entirely of aluminum, will house two adjacent enclosures. At the top is a vacuum chamber containing the reference mass and a sophisticated mass comparator capable of resolving a difference of 10 micrograms out of a kilogram, or 10 parts in 109. The comparator has been specially modified at NIST to be able to couple its weighing pan directly to a reference mass or to a combination solenoid and permanent magnet that hangs just above the floor of the vacuum chamber. 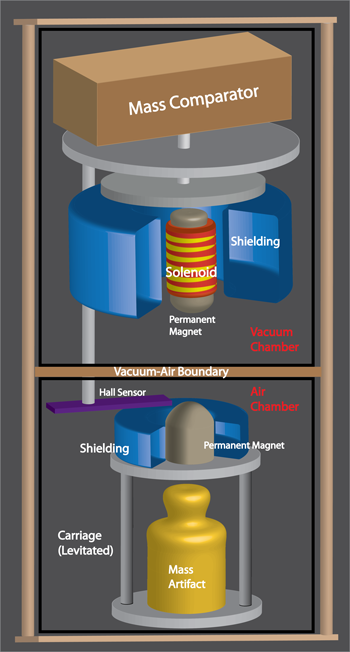 Directly below the vacuum enclosure, separated by an airtight barrier, is an air chamber containing the mass artifact to be calibrated. The mass is mounted on a suspension carriage at the top of which is a permanent magnet with one exposed pole. That pole is attracted to the opposite polarity of the magnet/solenoid combination in the vacuum chamber above, and the attraction force levitates the mass artifact and carriage when the poles are the right distance apart (typically in the range of 15 mm to 17 mm.)

The system is brought into equilibrium by using feedback sensors to carefully adjust the current in the solenoid. The magnets in each chamber are encased in shielding so no stray flux disturbs other parts of the system.

Magnetic levitation, of course, is not a new technology. ”Objects spanning the gamut from passenger trains to live frogs have been magnetically suspended or levitated,” Abbott says, and the technique has previously been used to weigh objects of up to 200 grams in small commercial systems. “But our device is new in the sense that we’re attempting to weigh much more mass with higher precision than has ever been done with this technique – up to several kg – and also to go between vacuum and air in order to disseminate mass values. Magnetic levitation has never before been used for dissemination purposes.”

Levitating the carriage and mass artifact is a very delicate process. If the magnetic force between the two poles is greater than the weight of the artifact, the poles will be pulled together. If the magnetic force is weaker than the downward force of gravity on the mass artifact and its carriage, then they will descend in the air chamber. For each load and distance between poles, there is a specific field strength that will produce near-motionless levitation.

To maintain equilibrium in the balance system, the device uses a computer-implemented feedback controller to adjust the strength of the solenoid’s magnetic field. In the initial design, feedback was provided by a laser-and-receptor combination that monitored the position of the mass in air. Later the PML researchers switched to a Hall-effect sensor on a cantilever placed near the exposed pole of the permanent magnet in the air chamber. That device tracks the magnetic field between the poles, which is a function of the distance between the poles.

The Hall sensor output is sent to the controller, which uses that signal to vary the current passing through some 2500 windings in the solenoid. This fine-tuning goes on 20,000 times per second, maintaining the levitated artifact at equilibrium.

A 50 cm tall working model which can measure loads from about 100g to a little over a kg was used for proof of principle. The stability of measurements with that device, constrained by the resolution of the balance, is about 1 mg in 1 kg, or about one part in 106. The project’s target uncertainty is no more than a few parts in 108. That is only slightly more than the BIPM’s Consultative Committee for Mass and Related Quantities has recommended for realization of the kilogram for primary standards.

The full-scale apparatus currently under construction “will really tell us where we are right now,” Abbott says. “My suspicion is that our stability is better than a milligram at present, but not much better. The new balance, once working, will tell us. Then it becomes a matter of chasing down systematic uncertainties.” The researchers hope to have initial results around December 2012.

Although the PML device avoids the need for adsorption modeling, it is expected to play an important role in that effort as well. The Mass and Force Group, headed by Zeina Kubarych, is in the process of procuring equipment necessary to duplicate the measurements that are being used to create absorption models for different materials.

“So in an interesting way,” Abbott says, “our endgame is going to be coming at the modeling problem from a different point of view. When we have the system working, we are going to make direct measurements on this apparatus and then compare the results with what people using absorption models are getting. That’ll be verification for them and verification for us.” 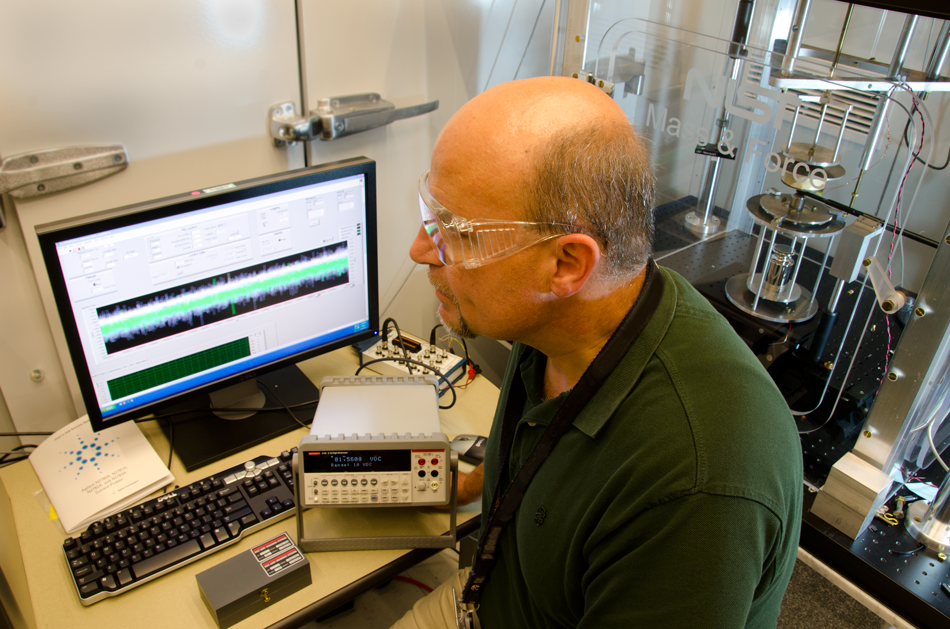 Patrick Abbott of the Mass and Force Group checks data generated by the proof-of-principle magnetic-levitation model, in the case at right. The full-scale instrument will be approximately 3 meters high. Courtesy/NIST