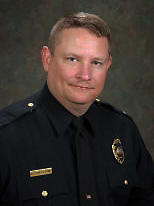 County Administrator Harry Burgess announced this morning that he has extended an offer to Dino Sgambellone to be the next Police Chief of Los Alamos County.

“We had an excellent pool of candidates,” Burgess said, “All five of the top candidates who were in Los Alamos two weeks ago for interviews were well-qualified to be the next Police Chief.”

Burgess said he intends to finalize the offer within the next few days. The next step would be Council approval of the candidate, possibly as soon as the upcoming Council meeting on Tuesday evening. Sgambellone met with the management team of the Police Department earlier this morning.

“Dino is here with his family visiting Los Alamos, exploring our community as they carefully consider this opportunity,” Burgess said.

He asked that local media respect the Sgambellone family’s privacy as they weigh their decision.

“I know that residents are anxious to hear this news – the Police Chief is an active and important member of our community – and I hope to be able to make an announcement very soon,” Burgess said.

Sgambellone rose to the top of a list of 40 applicants and a short list of five who sought the job.

He stated in his application for the Los Alamos police chief position that he “promotes an internal culture of professional, safe, efficient, and character driven policing by clearly communicating with subordinates to set expectations, while collaborating with the management team.“