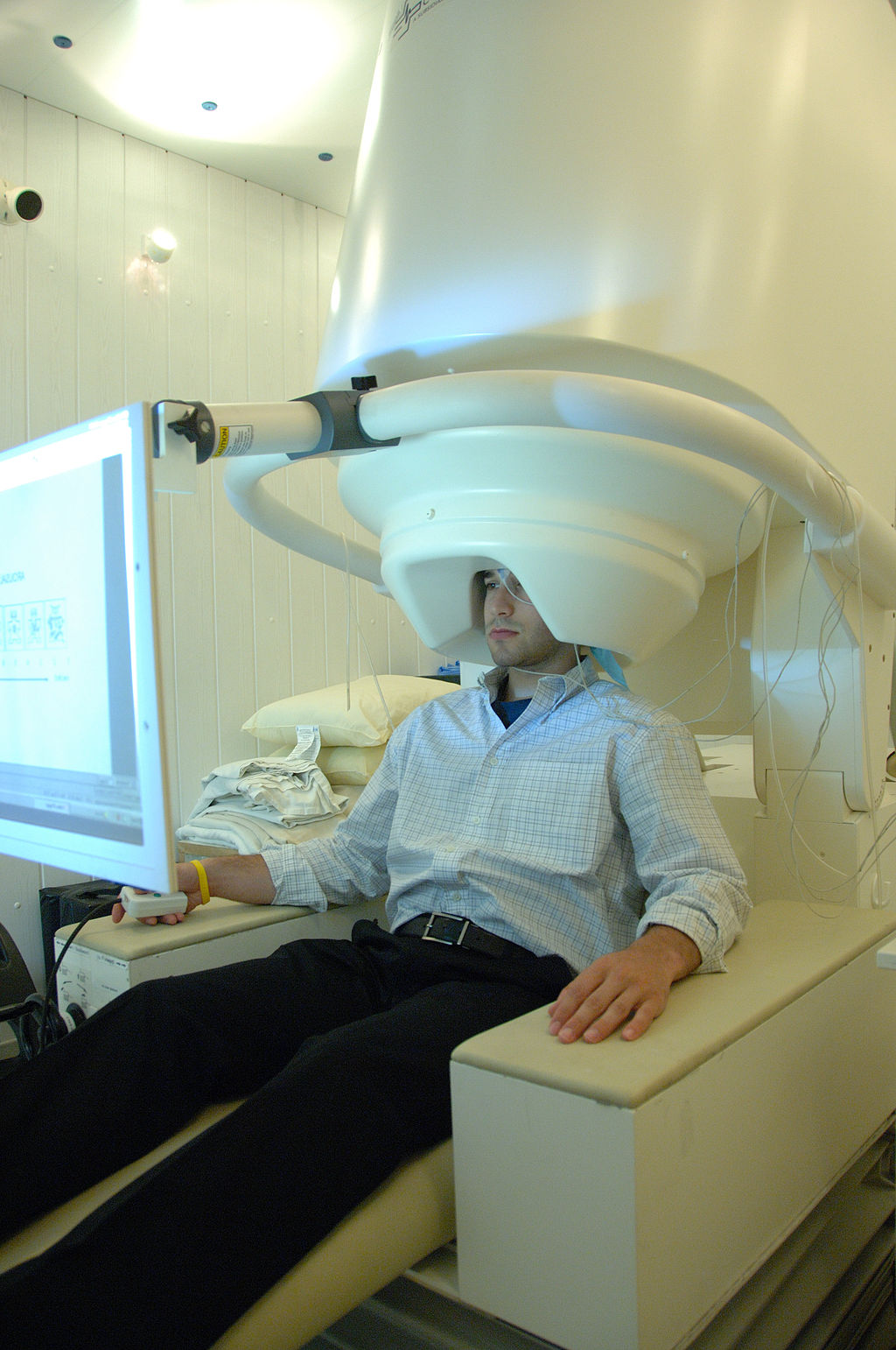 It’s really hard to hear what the brain is saying. Neural impulses — currents of ions moving through channels between the brain’s 100 billion neurons at a potential of about 0.1 volt — produce magnetic fields in the range of a trillionth of a tesla, about a 100 million times weaker than Earth’s magnetic field.

That electrical activity can be detected by electrodes placed on the scalp, or directly into the brain, that measure the difference in voltage between different points. That method, however, if used non-invasively, can’t identify the location of the signal with sufficient accuracy for many uses.

“For conditions such as epilepsy, doctors need to know where the epileptic center is,” says Svenja Knappe of NIST’s Physical Measurement Laboratory. “Magnetic signals detected outside the head can create images with much higher spatial resolution, but the signals are exceedingly faint.”

That is why Knappe’s team is at work on a new kind of magnetometer that can detect fields as weak as a few femtotesla (10-15 T, or quadrillionths of a tesla — far smaller than the ion currents generate), potentially at a fraction of the cost of conventional systems.

The typical instrument used in magnetoencephalography (MEG) is an array of a few hundred highly sensitive field detectors called SQUIDs.* These devices operate near absolute zero, and have to be immersed in liquid helium.

“It’s like a gigantic helmet that’s largely filled with helium,” Knappe says. “So it requires thermal insulation that keep the sensors a couple of centimeters from the head, and it can’t be adjusted to accommodate different head shapes and sizes. The prototypes we are building — called microfabricated optically pumped magnetometers (µOPMs) — do not require cooling, and can be placed within a few millimeters of the scalp.”

The devices measure the effect of magnetic fields on a trapped population of rubidium atoms enclosed in a glass cell about a cubic millimeter in size. A laser raises the temperature to about 150 °C, resulting in a vapor of a hundred trillion atoms. A specially polarized, “pump” laser beam is directed through the vapor, aligning the spins of all the atoms in the same direction. The same laser is used as a “probe” beam: It shines through the vapor, out of a window in the cell, and into a special detector that measures the polarization of the arriving light.

In the absence of a magnetic field, the atoms’ spins would retain their original orientation, and the polarization of the probe beam would remain unchanged. But when a field is present, it twists the atoms’ spin orientation slightly. That, in turn, changes the amount of the light entering the detector.

In their present form, the Knappe team’s µOPMs have been tested against SQUID-based detectors and have been shown to approach the limits of sensitivity of commercial SQUIDs. But there is much more to be done on many fronts.

In the near term, “we want to increase the dynamic range of those sensors and improve the noise rejection,” says project scientist Abigail Perry. “A screwdriver or some other metal implement in the neighborhood will have much larger fields than we’re trying to measure — even when they’re three meters away. A car driving by outside we would see and hear on the detectors.”

The principal noise-reduction scheme is to use two highly sensitive instruments — one at the measurement site and one far away. The on-site sensor will hear the desired signal, but both will hear the magnetic noise. So it should be possible to subtract out much of the magnetic interference, raising the signal-to-noise ratio.

Another problem is designing a system that will be flexible enough to be widely applicable. “Every head is different,” says project scientist Dong Sheng. “So we have to have a mechanism for assessing exactly where the sensors are with respect to the brain.” A lot of peripheral questions come into play. For example, the team is experimenting with different combinations of plastics to reduce the amount of conductive material in the µOPM’s enclosure.

“Eventually, of course, we’d like to reduce the amount of shielding that’s needed for MEG — to take magnetometry out of the shield,” Knappe says. “We hope that future systems could work in the field, where there’s no liquid helium around for a SQUID-based detector. This could maybe help to diagnose traumatic brain injuries (TBIs) where they happen.”

Major TBIs cause structural damage to brain tissue that can be seen using conventional MRI. However, lower-intensity injuries — which may still be very dangerous — do not cause the same damage, and therefore don’t show up on conventional MRI. 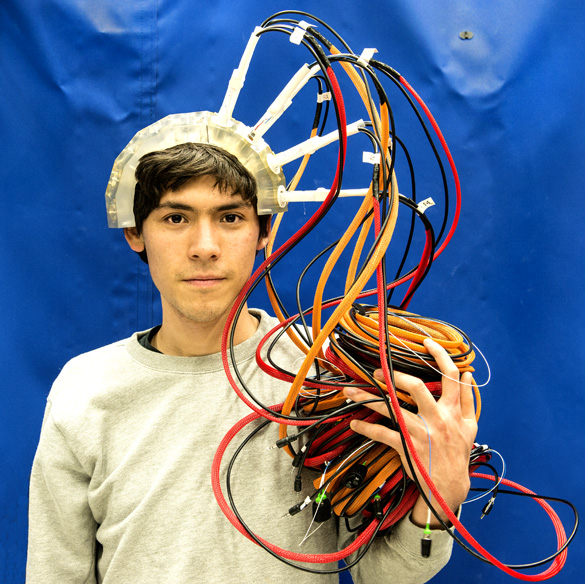 “But some of the naturally occurring waves in the brain do seem to be affected by such injuries,” Knappe says. “The electrophysiology seems to be altered, but there is no apparent structural damage. So medical personnel are looking for a biomarker that says, ‘Oh, here’s something!’ MEG could contribute potentially to providing that marker, and help diagnosticians decide whether to send a soldier back into combat or a football player back onto the field. It’s especially important in the case of concussions, because if you have a second one, it just multiplies the severity.”

A mobile MEG system might not be that far in the future, Knappe says. “We’ve built prototype arrays, we’ve put them on people, there is a nascent industry that is starting to take these procedures over, and the companies are selling prototype systems. So there has been a lot of progress. They are starting to be used in pilot studies, though not so far in clinical studies.

“If we want to go beyond what the current system can do, get higher spatial resolution, that hasn’t been demonstrated yet. We think we have the technology, but we don’t quite know. Still, we could be as much as halfway there.”

Meanwhile, Knappe’s project, part of PML’s Atomic Devices and Instrumentation Group, is finishing up work on the latest generation of µOPM prototypes. They will be evaluated by team’s medical collaborators Yoshio Okada and Matti Hamalainen at the Boston Children’s’ Hospital and Massachusetts General Hospital in coming months.

“This is one of several important applications for our magnetometer technology,” says NIST Fellow John Kitching. “We hope these sensors will begin to make an impact in a variety of areas, including nuclear magnetic resonance, magnetic anomaly detection, and navigation, in the coming years. It’s an exciting time to be involved in this field!”

* A superconducting quantum interference device (SQUID) is a highly sensitive detector of magnetic fields. It senses the effect of fields on the current in a superconducting loop containing Josephson junctions