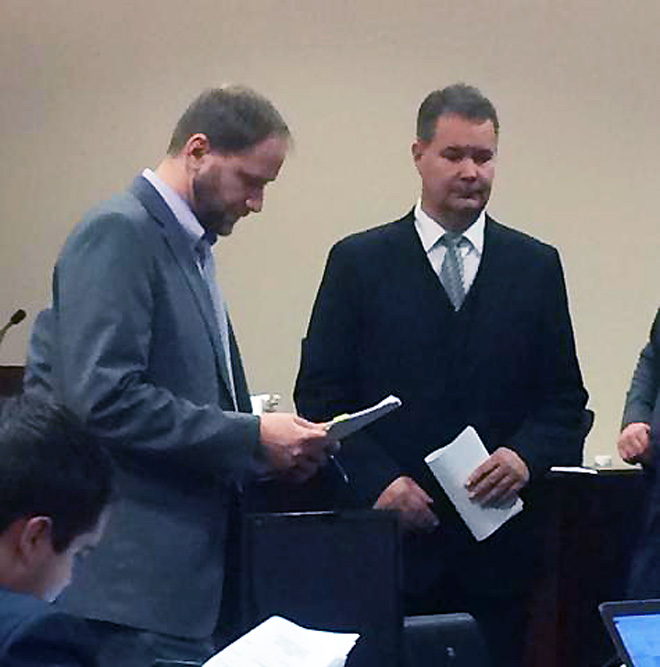 Deputy District Attorney Kent Wahlquist has filed a response in First Judicial District Court to an attempt to suppress a charge of sexual exploitation of children – possession charge against Scott Mallory.

Mallory’s attorney Christopher C. Marlowe filed an intent to invoke spousal privilege April 3. Mallory’s affidavit said he called police Aug. 3, 2015 to report that his wife and stepdaughter were missing. It stated that his wife told Los Alamos Police Ofc. Matt Lyon that he was possibly viewing naked photos and/or inappropriate photos on his computer.

Mallory claimed his wife knew about the photos because he had “previously communicated to (her) this information.” He also claimed in the affidavit that he considered the information “meant to be confidential and without disclosure,” and that at the time of his arrest he was never given the opportunity to claim spousal privilege.

Wahlquist’s April 10 response asking that the motion be denied said that Det. James Rodriguez got a search warrant Oct. 7, 2015 for Mallory’s laptop computer based on information received from his wife and stepdaughter.

Wahlquist says “the information was neither a communication nor was it confidential,” that Mallory was not present when his wife allegedly accidentally opened the recycle bin on the computer and observed the photos, and that it is clear Mallory never intended for her to find the photos.

He believes therefore that when Mallory’s wife informed the police of what she had found, she was not disclosing any communication made by Mallory. Wahlquist also maintains that because  Mallory’s stepdaughter was present when her mother found the photos on the computer, the “communication” of the photos by Mallory to his wife was not confidential.

The search warrant for Mallory’s computer laptop, cell phone and external hard drive signed by Magistrate Judge Pat Casados was based on a lengthy affidavit filed by Rodriguez.

Wahlquist’s response states that there are sufficient specific facts in the affidavit to determine “that there is sufficient probable cause to believe that the defendant’s computer contains evidence of sexual exploitation of a child.”

He said Mallory’s wife and stepdaughter both informed Lyon that they had seen the photos on Mallory’s computer, and his wife had explained to Lyon that she believed the naked girls to be underage “due to her personal observations of the faces and body sizes of the girls in the photographs.”

Marlowe has until April 25 to respond to Wahlquist if he chooses. Mallory was arrested Jan. 14, 2016 and his first appearance in Los Alamos Magistrate Court was Jan. 15, 2016. He was bound over March 22, 2016 to District Court and pleaded not guilty at his arraignment April 11, 2016, in District Court.