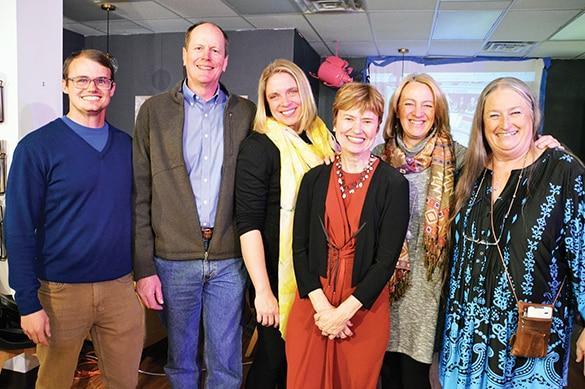 New Mexico voters selected Democrat Stephanie Garcia Richard of Los Alamos to serve as the next Commissioner of Public Lands. She is the first women in history elected to the position, garnering 340,585 (50.76%) votes over opponent Patrick Lyon with 291,663 votes (43.47%).

“I am so gratified to have had the opportunity to represent this community and get my start in public service here. It was here that I developed the expertise and skills that will allow me to go on to advocate for you all in the land office,” Garcia Richard said.

“I am humbled the by election results and the strong support I received … I will not let you down,” Chandler said.

The community also elected four Democrats to seats on the Los Alamos County Council. Sara Scott is the top vote getter, as she was in the 2018 Primary Election. She received 5,614 votes in Tuesday’s election.

“I would first like to thank the citizens who took time to speak with me regarding our county’s future.  This continuing public discourse will be the foundation of my service to the community,” Scott said. “I am also grateful to the supporters who donated to my campaign, knocked on doors, wrote letters of support, placed signs in their yards, and provided such helpful words of encouragement. I couldn’t have done it without every one of you!”

Scott also addressed her family’s support and love, all the way from California and the great Northwest, to Texas, Kansas and Tennessee.

“Their support was an essential part of my decision to run and to my campaign efforts, as was that of my husband Brian, beside me every step of the way right here in Los Alamos,” she said. “In addition, I want to be sure to recognize all the other candidates who worked hard this year for the opportunity to serve our community. It was a shared journey and I, as well as the county, certainly benefited from our discussions and interactions. I am humbled and honored to have the opportunity to serve our community as a part of the new council team; I’ll work hard and continue to listen to and learn from you as we move forward together to keep our community the special place it is and will be in the future.”

“First of all, I want to say how proud I am of my fellow Los Alamos voters for their engagement. There was a record-breaking turnout this election season, and I think this speaks to how important we all saw this election, especially at the national and state level, but I’ll take votes wherever I can get them!,” he said. “Of course, I am delighted to be re-elected as your county councilor and for the opportunity to serve this wonderful community for another four years. I am honored to have received the support of so many of you, and I will work hard to be deserving of your trust. I am very excited to work with our new councilors, Sara, James, and Randy. I have gotten to know them better over the campaign season, and I look forward to their new perspective and thoughtful ideas that we got a glimpse of during the (many!) candidate forums.”

James Robinson was next with 4.536 votes.

“What a night! Los Alamos, without a doubt, knows how to show up! Early voting and Tuesday was an amazing turnout! We definitely set the bar high for the rest of the state,” Robinson said. “I wanted to also thank my family, friends, and supporters again. Tuesday night would not have a happened without your support through this entire campaign. I especially want to thank Councilor Susan O’Leary and former Councilor James Chrobocinski. It was their friendship and support that solidified me throwing my hat in the ring. Finally, I want to thank all the candidates! This contest was a great debate, and I had a lot of fun discussing our vision for Los Alamos. We had an amazing group of candidates, and it is a shame not all of us could make it, including Timothy Morrison and Quentin Dimick. Thank you for caring about this community, and I hope to continue working with you all as we continue to make Los Alamos a wonderful place to live.”

“I am humbled to have elected to be one of your Los Alamos County Councilors. I look forward to working with others elected Tuesday including Sara Scott, David Izraelevitz and James Robinson and those still serving on Council to address our priorities. I heard the priorities of many citizens during the campaign. I want to continue hear from you in the next two months and while I serve on Council,” Ryti said. “I thank all of the candidates for running. I have gotten to know all of the other candidates during the course of the campaign. They are all community minded people who presented positive proposals to address problems or make recommendations for the betterment of Los Alamos. I thank all my supporters. Those who voted for me, made contributions, hosted yard signs, or wrote endorsement letters. Special thanks go to my campaign committee: Jane Lin, August Swanson, Chris Ortega, Michele Altherr, and especially my wife Wendy Swanson. Wendy helped me canvass many neighborhoods and talk to voters and provided moral support during the long campaign season.”

The remaining Council candidates not drawing enough votes to gain a Council seat include Republican John Bliss with 4,016 votes, Republican Dawn Trujillo Voss with 3,876, Republican Brady Burke with 3,750 and Libertarian Helen Milenski with 3,486.

“It is really significant the number of people that turned out to vote in this midterm election … of course I am very pleased with the outcome of my race … and I believe overall the campaigns during this election season were well run,” Granville said.

“It is with a heart full of gratitude that I say thank you for electing me as your next Los Alamos County Municipal Judge. I have met many of you since declaring my candidacy in March 2018. Over that last nine months, I learned directly from you what you envision for the future for Los Alamos County,” Allen said. “Be assured I took everything you said to heart and ran a campaign that sought to reflect what you think is best for our County. I am grateful for Judge Alan Kirk and his dedicated years of service to our community.”

Allen said she is proud of the campaign she and her electoral committee ran.

“For those individuals, be proud of what we accomplished. I am grateful to each of you for your support and would never have gotten this far without all of you,” she said. “I now start the serious and important work of upholding the rule of law in Los Alamos County. It is with this in mind that I pledge to you, the electorate, that I will do everything in my power to live up to the trust you, have placed in me.”

Probate Judge Anne Nobile said that although she was unopposed, she is still very grateful for each vote she received.

“It has been a pleasure to be associated with so many fine candidates this election season, Nobile said. “Our county is fortunate that bright, hardworking people are willing to contribute their time and considerable effort to provide the leadership we need to preserve our quality of life here in Los Alamos County.”

County Assessor Ken Milder said that this is the first time he has run for office without an opponent.

“I must admit that it is indeed nice,” Milder said. “There’s no need to raise campaign funds. There is no answering the “why are you better than your opponent?” or “what’s wrong with your opponent?” questions. (There has already been too much negative campaigning.)”

Being the local assessor has been one of the most joyful experiences of his life  Milder said.

“I came into an office that already had one of the most professional, hardworking, and well-respected staffs in the state,” he said. “I’ve learned so much from them and our colleagues throughout New Mexico.”

“Those are to ensure fair, equitable, and correct valuation of property, to be treated professionally and with respect when you come to my office, to be transparent, and to educate the public on the purpose and operation of the office,” Milder said. “For allowing me to serve you, I am truly grateful. Thank you.”