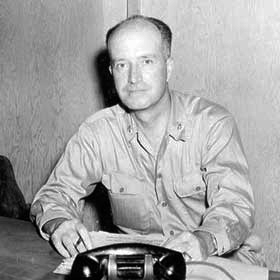 William “Deke” Parsons, Rear Admiral (1901-1953)
Unsung Hero of World War II
Submitted by Don Kendall
Captain William Sterling “Deak” Parsons was a distinguished naval officer, ordnance expert and associate of some of the world’s outstanding scientists.
He worked most intimately with Los Alamos scientists during World War II in transforming their nuclear creation into an effective weapon.
Commissioned as an Ensign in 1922, following graduation from the the U.S. Naval Academy, with several assignments in the Navy followed by graduation from Naval Postgraduate School at Annapolis in 1929 with an emphasis on ordnance. Parsons served as Liaison Officer between the Bureau of Ordnance and the Naval Research Laboratory, where he aided in early development of radar.
In 1939, he was assigned as Experimental Officer at the Navy Proving Grounds, Dahlgren, Va., and helped develop the radio proximity fuze for anti-aircraft shells, considered one of the most important technological innovations of World War II.
Capt. Parsons was assigned to the Los Alamos Laboratory of the Manhattan Project in June, 1943, reporting to Leslie Groves, director of the Manhattan Project and J. Robert Oppenheimer, director of the of the laboratory.
As Ordnance Division and Associate Director of the secret weapons laboratory, Capt. Parsons was responsible for much of the design and development of the atomic bomb’s components as a weapon for use use in combat.
Capt. Parsons also headed Project Alberta, which oversaw the responsibilities for the actual delivery of the bombs. He helped research, develop, assemble and drop the atomic bomb. As bomb commander, he assembled – inflight – the triggering device of Little Boy, the first atomic bomb used in combat over Hiroshima on Aug. 6, 1945.
After World War II, Capt. Parsons became the U.S. Navy’s leading figure on nuclear issues. He was promoted to Rear Admiral in 1948. As the atomic admiral of the postwar world, he led the navy into the nuclear age. He was an early advocate of nuclear power for ships and submarines, and his initiatives gave nuclear-strike capabilities to the aircraft carriers.
He died Dec. 5, 1953 from a heart attack at Bethesda, Md.

Deak Parsons, “Unsung Hero of World War II” should be recognized by the Los Alamos community, appropriately, by a historic statue located in a prominent location.