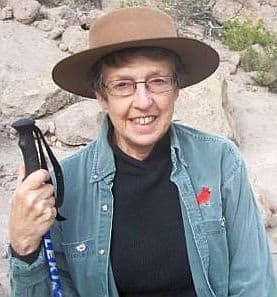 Deer Trap Mesa has been our family’s favorite hike for more than 30 years, so there shouldn’t be any surprises, right?  Wrong!

Yesterday we set out on the trail that leaves from the very end of Barranca Road on a typically windy Sunday afternoon.

We were greeted immediately by dozens of Beardtongue, the 10- to 15-inch tall stately blue-purple member of the Penstemon group of the Snapdragon Family.

I had not remembered seeing them in past years.

Before we had covered a hundred yards, we spotted large white yucca, commonly called Banana Yucca. The creamy white blooms were just emerging along their reddish stalk. Flowers on the smaller Narrowleaf Yucca were only deep red buds.

We climbed down the trail cut deeply into the tuff by a millennium of feet, both ancient and modern. We passed by the deer trap itself, a six foot by two foot rectangle carved 3- to 4-feet deep into the soft tuff.

We hiked past the next fragment of the mesa and then climbed back onto the mesa top, finding our first bright red Indian Paintbrush. There they were all in one view, red, white and blue.

Contrasting with the patriotic display were hundreds of small yellow Perky Sue, the first of the DYC, Damned Yellow Composites, of the many we will see as the season progresses.

As we hiked further out the mesa the landscape became drier with more juniper and fewer pinon.

The views of Rendija Canyon to the north just got better and better.

At the fork in the trail we selected the left-hand trail, leading along Rendija Canyon to the north-most of the three fingers of Deer Trap Mesa.

At the end of the trail we were greeted with a glorious view of the Sangre de Cristo Mountains and the Rio Grande Valley from Taos to Santa Fe.

It’s a 60-minute round trip hike with spectacular views every step of the way. Give it a try!