De Colores Restaurant to Close Next Week as Owner Retires 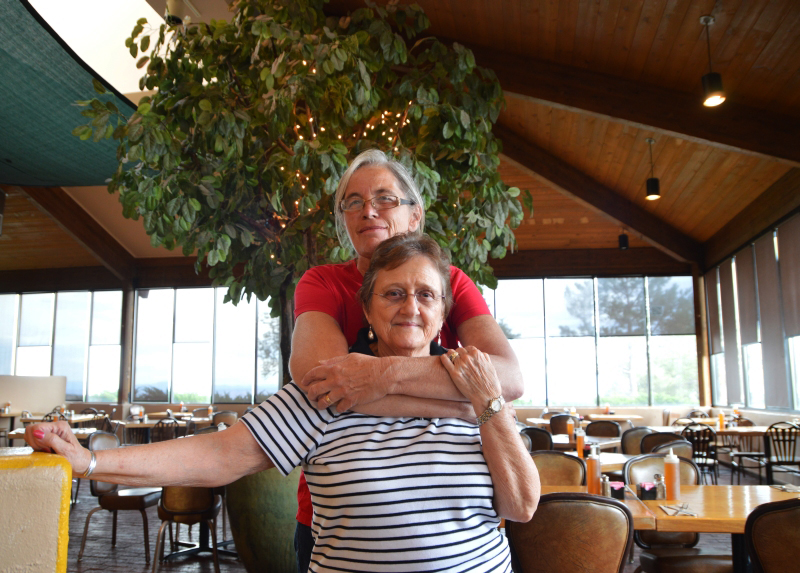 De Colores owner Joan Duran, foreground, with longtime manager Sue Dummer say they will treasure the memories of 35.5 years working together at the restaurant. Photo by Carol A. Clark/ladailypost.com

By CAROL A. CLARK
Los Alamos Daily Post
The longest running restaurant in Los Alamos, De Colores, is closing its doors.
Owner Joan Duran contacted the Los Alamos Daily Post late Monday to announce her retirement and the closing of her restaurant set for Wednesday, Aug. 28. Her lease at 2470 East Road was up in May and Duran said she was thinking about retiring then but the landlord asked her to stay until the end of the year. He called her last week and said he had someone interested in the building and told her she could leave as soon as she was ready.
“We opened De Colores April 1, 1978 and I think 35.5 years is enough time in a restaurant … my kids are happy, so it’s time to retire,” Duran said.
Duran recalled first opening De Colores in the former Tastee Freeze space on N.M. 4 in White Rock where the Hive is now. Her daughter Debbie was a student at Los Alamos High School. Her son Tim was in junior high and her youngest son George was 5 years old.
“George just turned 40,” Duran said. “He and all of our kids have worked at the restaurant and so have our six grandchildren.”
In 1989, Duran moved De Colores to a location behind the former 31 Flavors on Trinity Drive in Los Alamos. In 2004, she moved her restaurant to its present location on East Road.
One of her grandsons, Josh, has always insisted on having his birthday parties at De Colores, she said. He turns 8 years old today and will celebrate his birthday party at De Colores for the last time. The flip side, Duran said, is that now she will have more time to go to his soccer games.
“We’ve met and made such great friends through the years and know so many by name,” she said. “We’ve also had great employees … I’ve been lucky that so many have stayed with us a long time.”
Manager Sue Dummer started at De Colores in August 1978 and through the years she and Duran have become family.
“I will enjoy the memories of all the people I’ve met here and the employees I’ve worked with,” Dummer said as she hugged Duran.
Once she retires, Duran plans to spend some of her time helping her husband Mel Duran in his business, Jemez Technology, and more time visiting her 96-year-old mother Rachel Apodaca Cunningham. Duran also has a 9-year-old black standard poodle named Raven who she said is going to be “very happy” about her retirement.

“I’m going to miss being in business and all the people I’ve met over the years but it’s time … it’s time to be with my family more and it’s time to make room for the new restaurant owners coming up,” Duran said.

Duran plans to throw one final event for the community before closing her doors and said she will announce the details in the Los Alamos Daily Post soon.
Menu
LOS ALAMOS