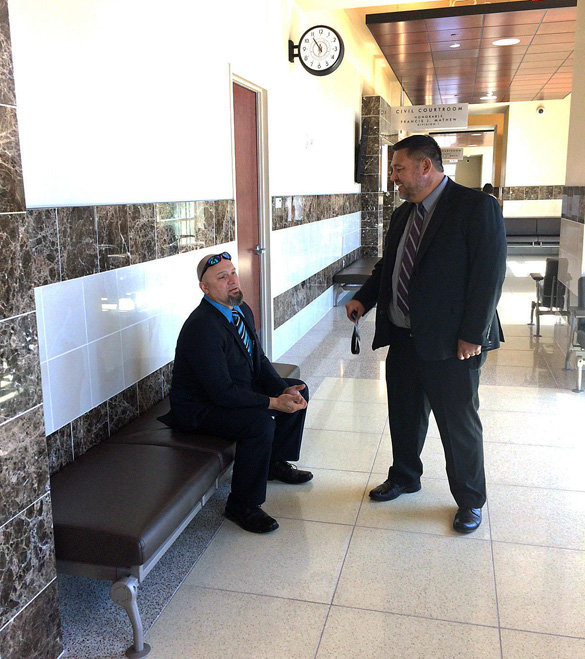 Det. C.J. Brown, left, chats with Assistant Attorney General Jason Yamato outside the courtroom during the trial of David Rael in the First Judicial District Court in Santa Fe. Photo by Maire O’Neill/ladailypost.com 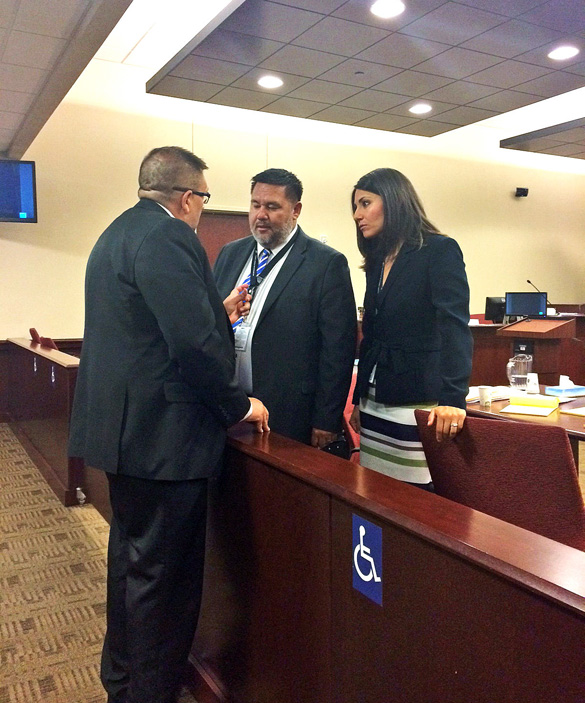 Cmdr. Morris testified Tuesday that Pena was investigating the sharing of online child pornography in June 2013 when he identified Rael’s computer as a potential source for at least six files of interest. In July 2013, LAPD confirmed that the IP address belonged to Rael and Morris obtained a search warrant for Rael’s residence. Morris and Pena went to the residence and took Rael to the station for questioning. Morris told the court about the arrest and subsequent questioning of Rael. SA Fails testified as to his involvement in the preliminary examination of Rael’s computers when the search warrant was executed.

Brown and Pena testified about their investigations into Rael’s computer equipment where they located child pornography downloaded and shared by Rael through file-sharing software. The videos showed prepubescent and pubescent females dancing and engaging in sex acts with adult males. Edwards and Burgess attempted to discredit Brown and Pena by indicating that Rael could have inadvertently downloaded and shared the child pornography.

In his closing arguments, Yamato said the child pornography had been found on Rael’s computer to which he had virtually exclusive control. He said Rael had admitted to seeing the videos, that he had indicated during his interview with police that he had taken money to fix computers for other people, which indicated that he was not a novice. He said Rael’s screen wallpaper showed a juvenile female with a seductive expression.

Yamato described copies Rael had made of the child pornography he had downloaded and how he had shared it with Pena online. He questioned how Rael could have transferred files accidently when it would take getting through four or five actions by accident.

Yamato said Burgess only spent a little time on the case. He said Rael admitted to watching a couple of the videos. He said Burgess didn’t look where the child pornography was likely to be found, that he didn’t look at culpatory evidence, which he called “an excellent strategy when the defendant is guilty”.