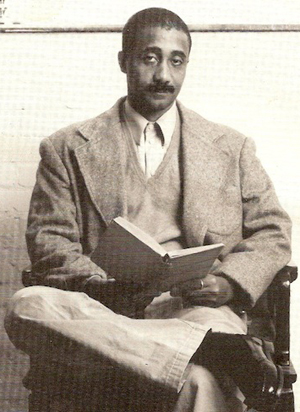 Los Alamos is in for a dramatic treat when actor/writer David Mills performs an excerpt from his show, “Dreamweaver: The Works of Langston Hughes” at 7 p.m. Monday, March 4 at UNM-LA in the Student Center Lecture Hall (Bldg. 2.)

The event is free and open to the public. The event is funded by the Jim Sagel Memorial Lecture Series Fund, established in honour of the writer Jim Sagel who taught creative writing at UNM-LA for many years.

I experienced the full show when David Mills performed it at The Lensic in Santa Fe on Wednesday night to an appreciative audience that rewarded him with a standing ovation.

The complete show was a 90-plus minute tour de force in which Mills acted out a variety of poems and short stories by Hughes.

For example, one minute he was the ambitious Elder Jones (“Sister Maggie, come and lemme down!”) and another the sassy Madam Alberta K. Johnson (“The Madam stands for business.”)

With only two chairs and the items in his pocket as props, he convincingly embodied different characters using voice, posture, and gesture.

Mills was inspired to create this show after three years as writer-in-residence in Langston Hughes’ East Harlem home.

His artistry is demonstrated in his choice of poems and stories and the way one leads to the next, leading us from laughter to foot-tapping bebop and rhyme to somber admissions and back again.

His performance of the poem “Mother to Son” moved me, and the tension in the auditorium was real.

A less-skilled actor might have turned the poem into a light-hearted exaggeration as it begins:

Life for me ain’t been no crystal stair.

It’s had tacks in it,

And boards torn up,

And places with no carpet on the floor—

But Mills knows his material, and from the first words I believe the mother’s honest reflection of her life, her strength revealed in the next lines:

But all the time

I’se been a-climbin’ on,

And sometimes goin’ in the dark

Where there ain’t been no light.

Hughes’ poem is as relevant now as it was in the 1920’s, and the advice reaches out to encourage all of us, whatever our hardships:

So boy, don’t you turn back.

Don’t you set down on the steps

’Cause you finds it’s kinder hard.

And life for me ain’t been no crystal stair.