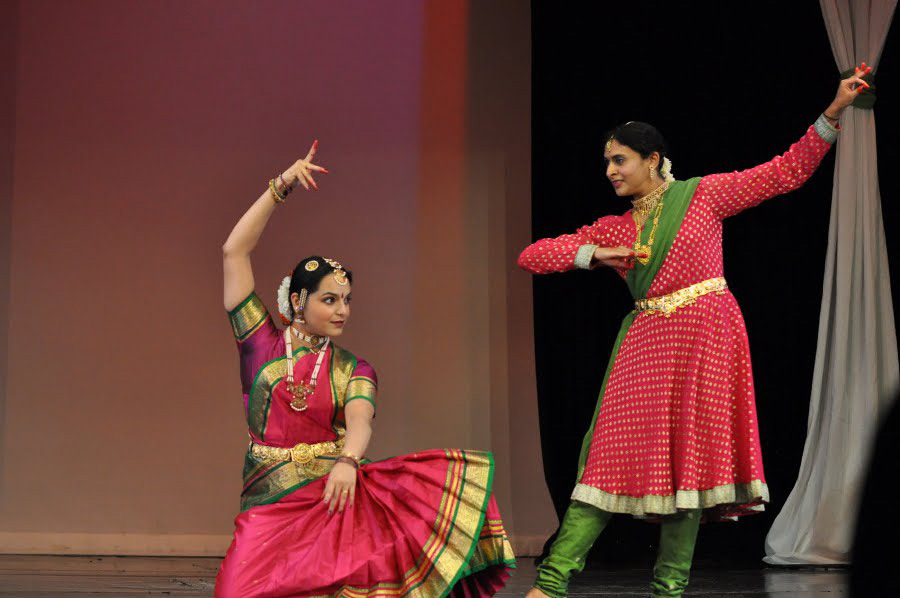 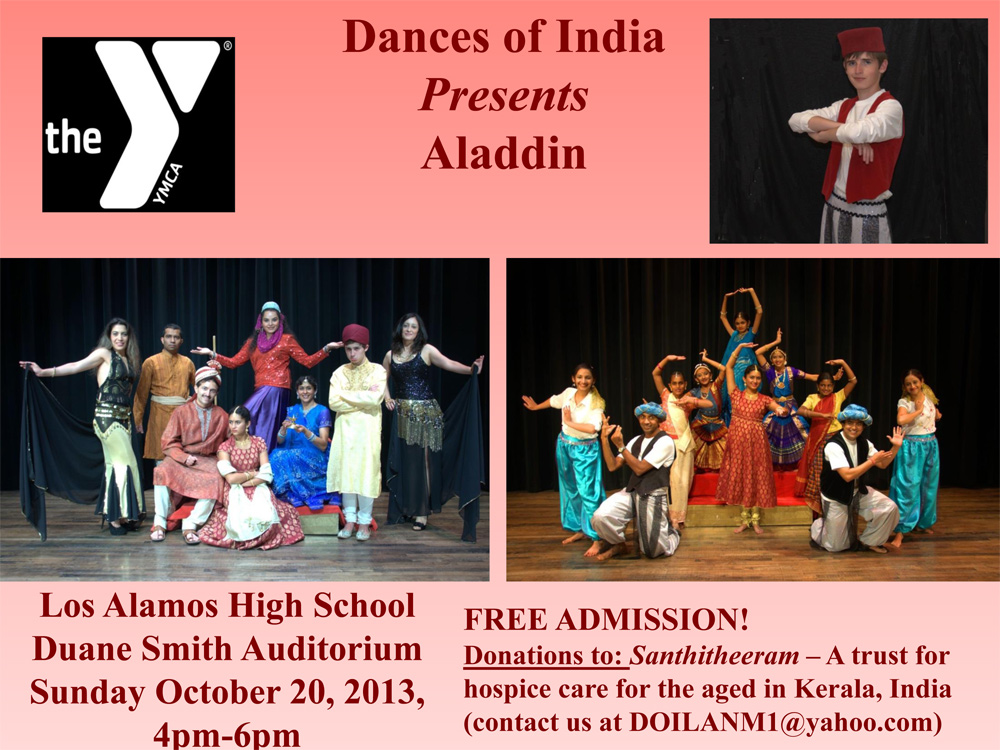 Dances of India will present an Indian adaptation of “Aladdin” in a benefit performance for “Santhitheeram,” a charitable trust for hospice care for the elderly in Kerala, India.

The show is 4-6 p.m. Sunday, Oct. 20 at Duane Smith Auditorium on the Los Alamos High School Campus. Everyone is cordially invited. Admission is free, but donations are requested as all proceeds benefit the charity.

Here is a brief about each of the dance instructors and the dance styles they teach:

Bharatanatyam is a classical Indian dance form that is popular and nurtured in the Indian state of Tamil Nadu. It is known for its grace, purity, tenderness, and sculpture-like poses. Today, it is one of the most popular and widely performed dance styles and is practiced by male and female dancers all over the world.

The name Bharatanatyam is a simple derivation from the four most important aspects of dance. These are: Bhava meaning emotion, Raaga meaning music or melody, Taala meaning rhythm and Natyam meaning dance. Thus Bharatanatyam is the dance that encompasses music, rhythm and expressions and strictly adheres to the Natyashastra, the scripture of classical Indian dance.

This dance style is characterized by a linear form of the body without any pronounced movement of the upper body and linear spatial patterns that make the dance form extremely dynamic and powerful.

Nandakishore is a professional Indian Classical Bharatanatyam dancer from India. She has trained under Sri. Parimal Phadke and Smt. Ashwini Ekbote, senior disciples of Guru Smt. Sucheta Chaphekarin Pune, India. Since 2007 she has been a dance instructorat the Family YMCA in Los Alamos.

Over the years since Kavita Nandakishore moved to the United States, she has performed for various events in Los Alamos, Santa Fe and Albuquerque. She has also been choreographing and performing various types of dances for the annual Dances of Indiashow which is held in Los Alamos every October.

Each year her students get to show their creative side in the annual show. 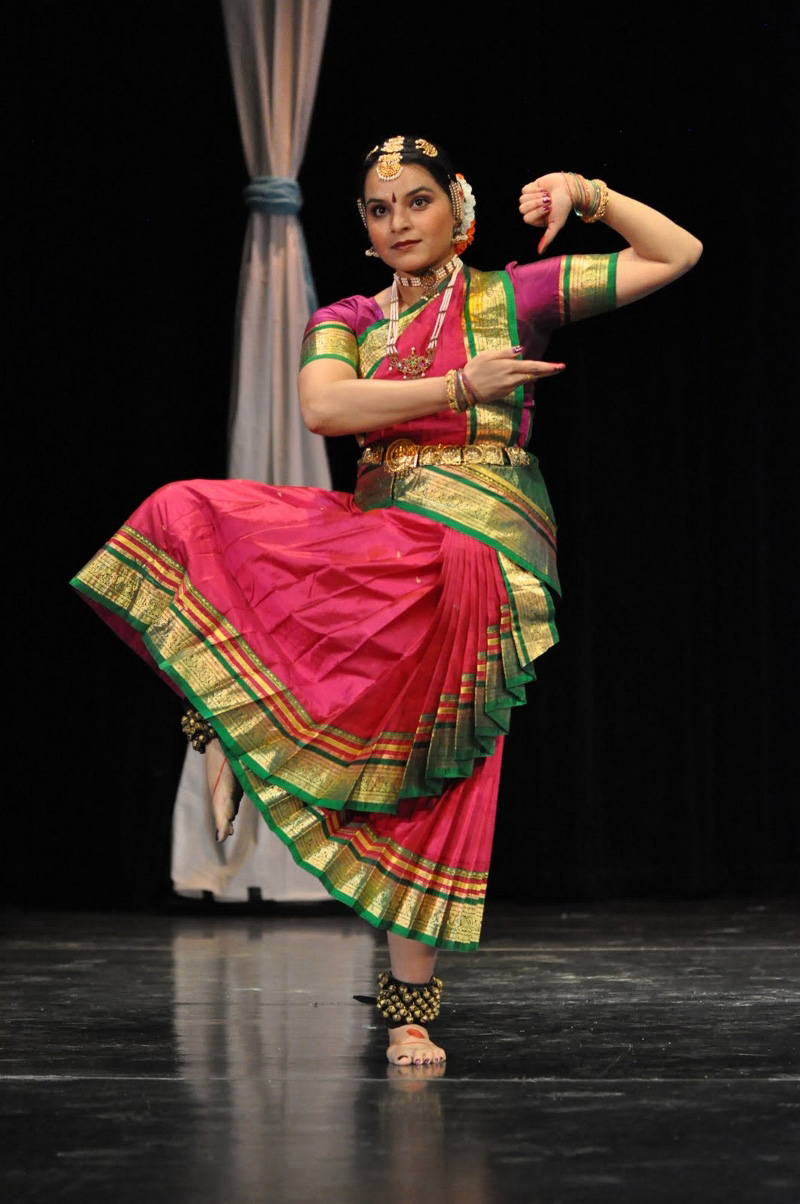 Kavita Nandakishore has  also showcased her talent at EVOKE! World Music & Dance Concert, Santa Fe, May 2013, Center For Contemporary Arts, Santa Fe in April 2013, Albuquerque Folk Festival, June 2011 and the Santa Fe Folk Art Market Festival, July 2010. She is a regular performer at the annual Diwali show which is organized by the India Association of New Mexico in Albuquerque.

“I believe that all classical dance forms of India are a living, breathing art form, Kavita Nandakishore said. “I want to inculcate in every person’s mind the importance of classical dance through my performances. With my contribution to this field, I would try to give my best to the upbringing of this art. I would also like to pursue this art of dance further and achieve a name in this field.” 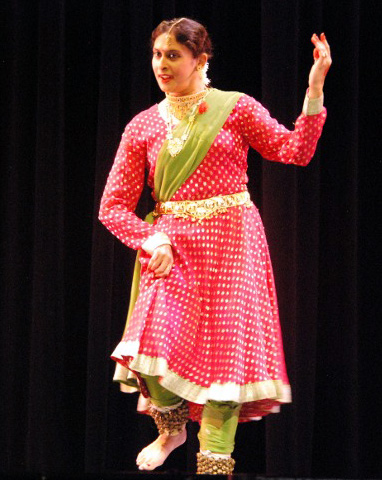 Kathak, taught by Alina Deshpande, is a North Indian classical dance form that had origins with Kathakars or storytellers. It evolved over time and absorbed many features from Persian dance after the Mughal Empire took hold in India. This dance is characterized by graceful symmetric arm movements coupled with intricate patterns of footwork and fast pirouettes.

The dancers also tell stories through their expressions and body movements keeping alive the story telling aspects. A highly rhythmic dance, Kathak is supported by the tabla (percussion) and classical routines are performed to Hindustani classical music. Alina Deshapnde has trained under Guru Maneesha Sathe in Pune, India for 11 years and has been teaching Kathak at the YMCA since 2004.

The Aladdin production features students from the Kathak and Bharatanatyam classes as well as actors and guest dancers from the local community. It promises to be an evening of fun, color along with exotic music and dance!