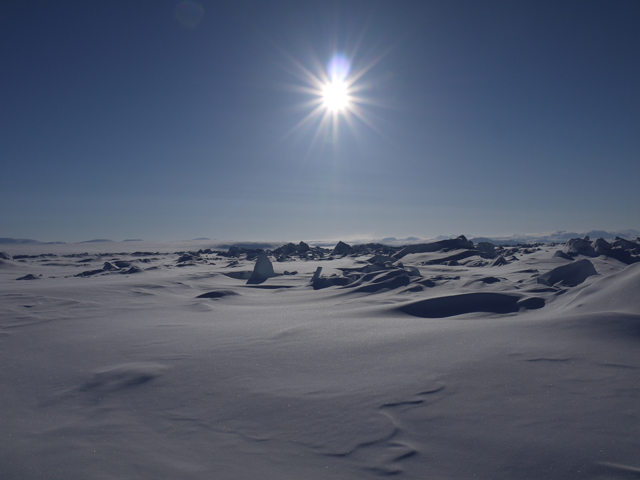 Sea ice scape photo by Dr. Katherine Giles, a research fellow at the Centre for Polar Observation and Modeling at University College London (UCL) and a member of the scientific team studying sea-ice loss. Courtesy/AGU

WASHINGTON, D.C. – Arctic sea ice volume has declined by 36 percent in the autumn and 9 percent in the winter between 2003 and 2012, an international team of scientists has discovered.

“The data reveals that thick sea ice has disappeared from a region to the north of Greenland, the Canadian Archipelago, and to the northeast of Svalbard,” said Dr Katharine Giles, a research fellow at the Centre for Polar Observation and Modeling at University College London (UCL) and a member of the scientific team.

Giles and her colleagues report their findings in a paper that has been accepted for publication in Geophysical Research Letters, a journal of the American Geophysical Union.

The findings confirm the continuing decline in Arctic sea-ice volume simulated by the Pan-Arctic Ice-Ocean Modelling and Assimilation System (PIOMAS), which estimates the volume of Arctic sea ice and had been checked using earlier submarine, mooring, and satellite observations until 2008.

Other satellites have already shown drops in the area covered by Arctic sea ice as the climate has warmed. Indeed, sea-ice extent reached a record minimum in September 2012. But CryoSat-2, launched in April 2010, differs in that it lets scientists estimate the volume of sea ice – a much more accurate indicator of the changes taking place in the Arctic.

The research was funded by the Natural Environment Research Council, the European Space Agency, the German Aerospace Center, Alberta Ingenuity, NASA, the Office of Naval Research and the National Science Foundation.