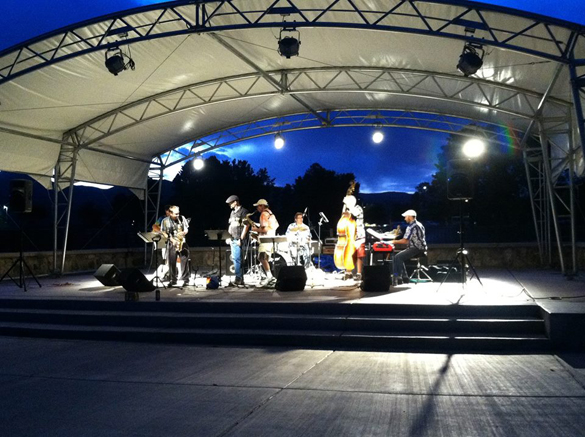 The Craig Martin Experience returns to Ashley Pond for another evening of jazz at 7 p.m., Tuesday. Courtesy photo

Fresh off of a performance at the Gordon’s Summer Concert Series, the Craig Martin Experience (CME) returns to Ashley Pond for another evening of jazz at 7 p.m. Tuesday, June 9.

Part of the Los Alamos Creative District’s “Tuesdays at the Pond” concert series, CME will bring a new set of music different from the fusion jazz they performed at the pond last Friday.

“The textures of jazz are a rich and varied collection of moods, styles, and feels and we like to feature different aspects of the art with each performance,” Craig Martin, the bandleader of CME, said.

The first half of the show will feature traditional swing tunes from the 1930s to the 1960s. The second set is loaded with more modern, but still traditional jazz songs. Included in this set are four originals composed by band members.

Martin explained that the feel of jazz comes from imprecision, but it is not easily explained.

“Depending on the tune, you might want to rush each beat a little to create a sense of swing or hold back a bit for a feeling of jive, for lack of a better word,” Martin explained.

He also says part of the pull of the music is notes that don’t belong in traditional scale. Jazz musicians call these “blue notes.”

Martin said that the Ashley Pond Pavilion is a wonderful venue for performers and the audience.

“What a great asset to the Creative District and the community,” he said. “The downtown area is becoming more attractive and vibrant each year.”