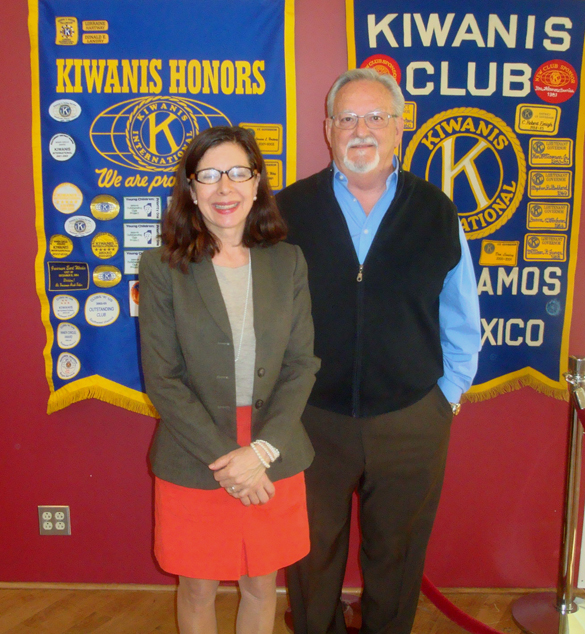 CASA Executive Director Annie Rasquin and CASA volunteer Bob Martin  spoke at Kiwanis recently on the importance of the program and its desperate need for more volunteers. Photo by Don Casperson
By CHARMIAN SCHALLER
Kiwanis Club of Los Alamos

Rasquin has a master’s degree in social work and has spent 20 years dealing with family traumas affecting children. She has spent 30 years in New Mexico, and she has two teen-aged children of her own who are growing up in Santa Fe. She has a special interest in Los Alamos because, as a paramedic/firefighter from Santa Fe years ago, she worked in Los Alamos for two weeks immediately after the Cerro Grande Fire.

She was accompanied at Kiwanis by Bob Martin, a CASA volunteer who graduated from Los Alamos High School in 1965, moved away and had a full life elsewhere, retired, returned to Santa Fe in 2014, and then discovered that CASA provided him with truly satisfying work.

Literature that Rasquin and Martin brought to Kiwanis traced the origin and usefulness of CASA. One pamphlet passed out at the meeting explained:

Basically, the CASA is the independent eyes and ears of the judge in charge of the case.

The CASA program has proved to be very valuable. The pamphlet noted that children who have CASAs are only half as likely to be abused again; are more likely to graduate from high school; are less likely to end up in the criminal justice system; and are less likely to pass on the cycle of abuse to another generation.

The trouble is, not only is the child welfare system overburdened in this area, but there aren’t enough CASA volunteers. The three-county area that Rasquin oversees—Los Alamos, Rio Arriba, and Santa Fe Counties—has approximately 150 foster children, but it has only about 55 CASA volunteers. The majority of the foster children in the First Judicial District are in Rio Arriba County, but a CASA need not live in the same county where he or she volunteers….

Rasquin said she “would like any child here to have the same opportunities as anyone else in the country,” but child abuse, domestic violence, and substance abuse are all going up in her area.

Kids who enter the system “in the middle of the night, injured,” and with health and behavioral challenges, “carrying their stuff in a bag,” desperately need the help of caring volunteers, she said. CASAs are appointed by the local judge, who provides them with “remarkable” access to records and gives them three mandates: to make sure the child is safe; to see to it that the child has everything needed to thrive; and to make sure that the child has a chance for a permanent home.

“We’ve seen that CASA works,” she said, but more volunteers are essential.

Martin said he was retired when he read about CASA—”and I realized it was what I was meant to do.”

He went through five weeks of one-day-a-week training, was sworn in by a judge in Santa Fe, and chose as his first case a child who had been “medically neglected” and needed a transplant. The first time he saw her in the hospital (and took her a book), she ordered him out of her room—but when he looked back, he saw her pick up the book and start to read.

“If you have time in your schedule and room in your heart,” he said, this program is very rewarding.

CASAs must be willing to commit at least one year of their time; must be able to communicate effectively; must be willing to participate in an in-depth training program; must be able to pass background checks; and must be over age 21. (Peer group meetings also are held about every month so that volunteers can share their experiences, learn, and answer question such as, “Am I doing it right? And is there something else that could be done?”)